As Election Day inched toward a close, the results offered few surprises and indicated little change in the political balance of power from coast to coast.

As the 11 p.m. hour arrived in the eastern U.S., former Vice President Joe Biden had yet to win any state that President Donald Trump carried four years ago. The so-called Blue Wall of reliably Democratic states was still on a wobbly foundation as Pennsylvania, Michigan and Wisconsin were counting ballots.

Trump was running strong in Ohio and Florida. And Democratic efforts in North Carolina, Georgia and Texas seemed more aspiration than actually in play. Each of those races, however, remained too close to call. If Trump prevails in those five states, the focus of the race will return to the 2016 battlegrounds of Michigan, Pennsylvania and Wisconsin. With mail-in ballot counts only just beginning, it looked increasingly likely that the result would not be known until later this week.

House Democrats were on pace to hold their majority in the House. Tantalizingly close Senate races proved slippery for Democrats, who netted a seat in Colorado but lost one on Alabama. Republicans fended off challenges in Texas and South Carolina—expensive races that bled cash from other contests, like those in Iowa, Georgia and Arizona, where results were yet to come.

The marquee race of the day, of course, is Trump vs. Biden. Polls had showed Trump opening the day at a deficit against his Democratic challenger. But as the candidates matched insult for invective, the country was left with the choice of two white men in their 70s as the steward of a diverse nation. Trump pledged to continue his norm-shattering while Biden promised to return to a more staid version of America. Trump pledged to break the mold. Biden cast himself as a transitional figure.

But the election results will decide not just who will occupy the White House for the next four years but also to pick the next Congress, governors in 11 states and thousands of state and local leaders who will set trash pick-up schedules, utility rates and school curricula. 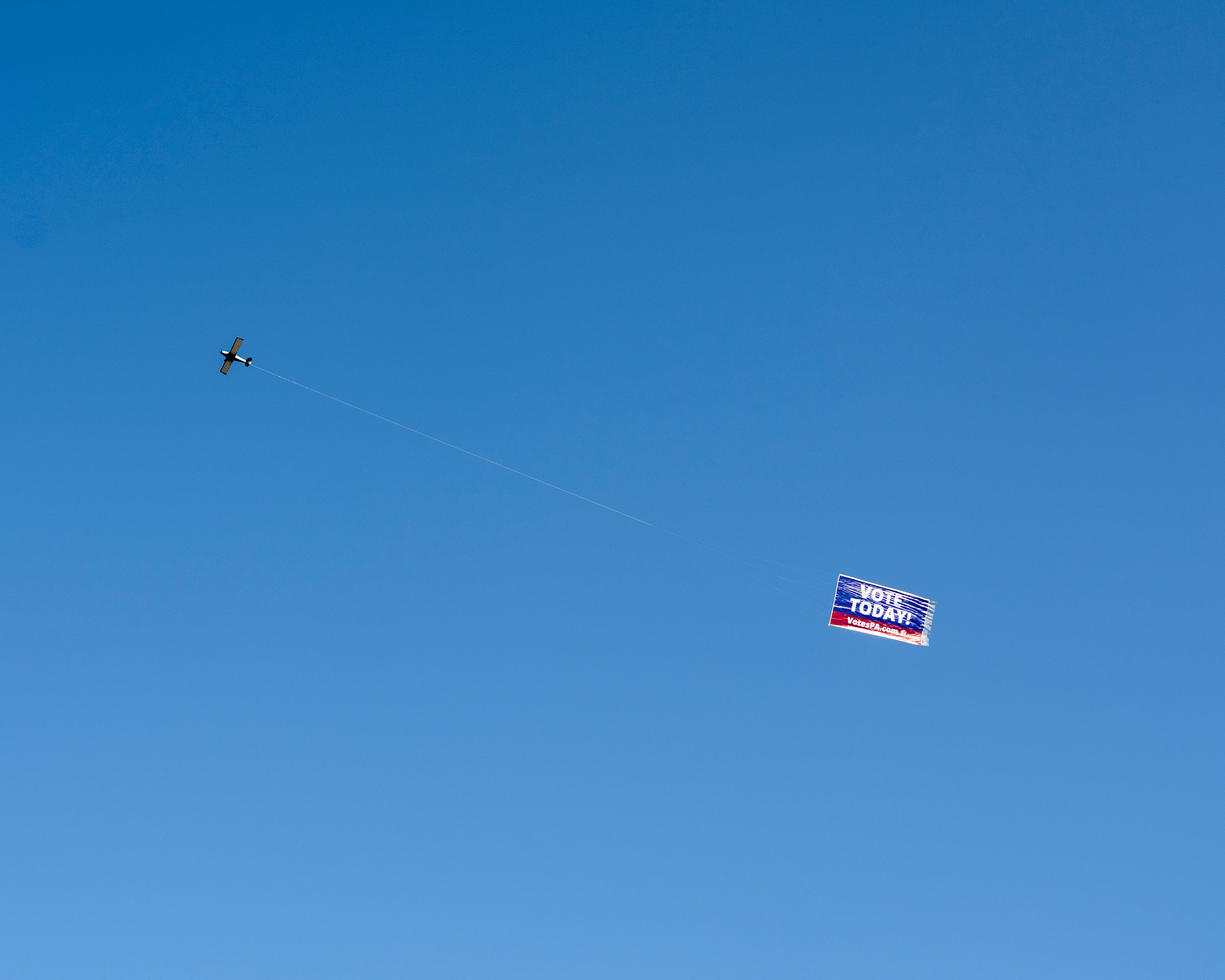 An airplane flies over Erie, Penn. to encourage people to vote.

The flexing of the United States’ democratic might—amid a resurgent pandemic—seemed one of the most resolute rejections of a difficult year rocked by COVID-19, the ensuing economic collapse and a reckoning on racial justice. Amid heightened fears about how things may have devolved into chaos, America took a deep breath of relief as things seemed to proceed normally—at least so far.

With some 101 million ballots already banked before the sun rose on Tuesday, the day was set to be one for the history books. Despite the challenges of conducting an election in the middle of a public health crisis, the mettle of America met the moment. Lines were long but moved efficiently. The counts were coming quickly after polls closed. And the map remained open for either party to make major changes.

With the balance of power at the Capitol seeming to coast to the status quo, House Speaker Nancy Pelosi faced a question about how the party would manage a rowdy Democratic caucus where some were agitating for change.

Election experts have stressed the importance of patience when waiting for the official vote count of all the races. Candidates do not determine who wins the election—regardless of what they may say. The final results are determined by state and local election officials. The cable networks were standing by for a potential address from the President from the White House’s East Room.

Americans have relied more heavily on absentee and mail-in-voting this election because of the coronavirus pandemic, which has made voting access an even bigger issue than normal. Democrats and Republicans have already filed hundreds of election-related lawsuits over whose votes count and how hard it is to access the polls.

Early voting trends suggest that turnout and enthusiasm will be high. Some states, like Hawaii and Texas, surpassed their total vote count from 2016 even before Election Day.

Despite an early loss for incumbent Sen. Cory Gardner of Colorado, the embattled Republican Senate majority appeared safer the further from poll closing the count came.

Sen. John Cornyn of Texas held off a Democratic challenger, as did Sen. Lindsey Graham in South Carolina. Democrats were down one seat, with a loss in Alabama for incumbent Sen. Doug Jones to Tommy Tuberville. Efforts to oust McConnell came up short, and Sen. Susan Collins of Maine appears on safer ground.

At a net change of zero, Democrats were still looking at pick-up opportunities in Arizona, Iowa and North Carolina. But if Trump wins the White House, that would leave a 50-50 Senate that would be in Republican control, since Vice President Mike Pence breaks ties.

Even without final results, it looks like the Senate starting in January will be incredibly tight. That foreshadows a contentious 117th Congress that could be replete for infighting or dealmaking, depending on which party prevails in the still-ongoing White House race.

A largely peaceful day at the polls despite threats

Fears over widespread violence and voter intimidation at the polls failed to materialize. “No doubt we were bracing for the worst and have been pleasantly surprised to see elections in many parts of the country move rather smoothly and successfully,” Kristen Clarke, president and executive director of the Lawyers’ Committee for Civil Rights Under Law, told reporters. 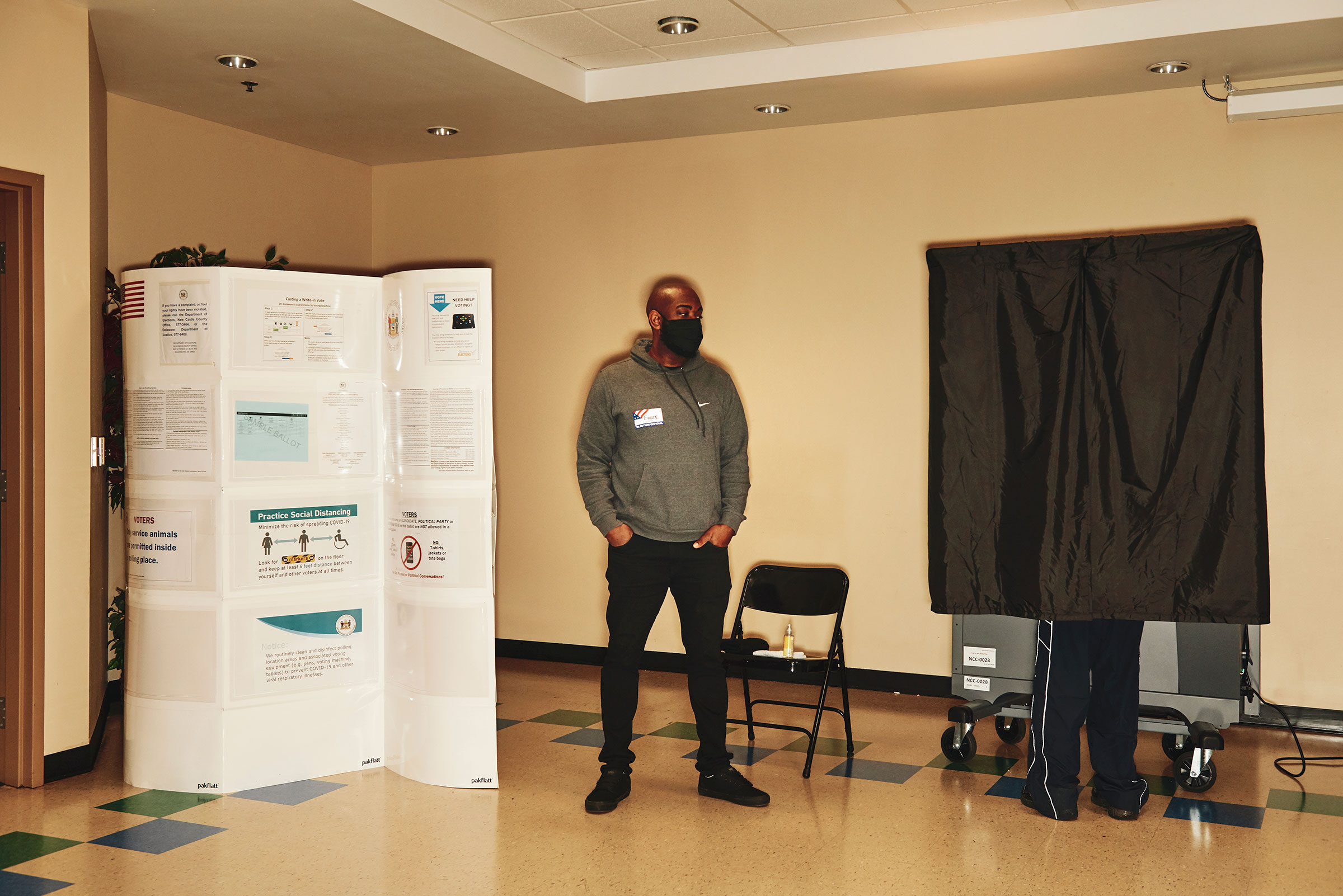 A scene from inside a polling location in Wilmington, Del. on Election Day, Nov. 3, 2020.

The voting rights group said it had fielded 30,000 calls on its election protection hotline Tuesday asking for legal advice about problems they faced. Militia and extremist groups’ threats of violence at polling places did not materialize. However, Clarke listed several individual reports of intimidation, including an armed man wearing a Trump hat who was ultimately arrested in Charlotte, N.C.; an armed man waving a Trump flag near a polling location in Baker, La.; two white men who identified themselves as “deputies” and were questioning voters outside a polling site in central Hillsborough County, Fla.

“The isolated incidents of voter intimidation have been problems we cannot ignore,” Clarke said. “They have not been widespread and systematic. But they have been far greater in numbers than what we have seen in recent elections and are a reflection of the dark times that we are in as a nation.”

Mitch McConnell is going back to the Senate, prevailing in his re-election bid early in the night. What’s unclear is this: will he be the Majority Leader or the Minority Leader come January?

The Associated Press made the call soon after polls closed as his colleagues from New Hampshire to Oklahoma won another six-year term. Tennessee’s Senate seat will remain in Republican hands as Bill Hagerty will follow Lamar Alexander after the senior Republican retires next year.

Republican who expressed support for QAnon elected to House

Republican Marjorie Taylor Greene, who previously expressed support for unfounded QAnon conspiracy theories, has been elected to the U.S. House in Georgia’s deeply conservative 14th district, according to the AP.

(QAnon theories baselessly claim that President Trump is fighting to stop a “deep state” cabal of Satan-whopping pedophiles running a global sex-trafficking ring.) Greene, who ran unopposed for her seat, has since distanced herself from comments connecting her with QAnon.

Greene has also drawn attention for Islamophobic comments—including suggesting Muslims do not belong in government—and earned the attention of Trump, who tweeted that she was a “future Republican star.”

Polls have now closed in Georgia, South Carolina and Kentucky — three states where costly Senate races may determine which party controls the chamber next year. Polls have also closed in Indiana, Vermont and Virginia, where Democratic Sen. Mark Warner was among the first candidates in the country to know he was to keep his job.

The Associated Press was moving along quickly, tipping Kentucky into Trump’s delegate tally and Vermont into Biden’s. House races from Florida and Vermont were quickly confirming their incumbents would hold onto power for another two years. Early surprises were hard to come by, but that’s to be expected. Truly tight races take some time to count.

The first wave of numbers will tell the world less about specific races than the fact that they’re coming in so orderly. After an election season marred by worries of pandemic delays, corrupted technology and foreign influence, the biggest problems of the day seemed to have been high levels of participation and long lines. 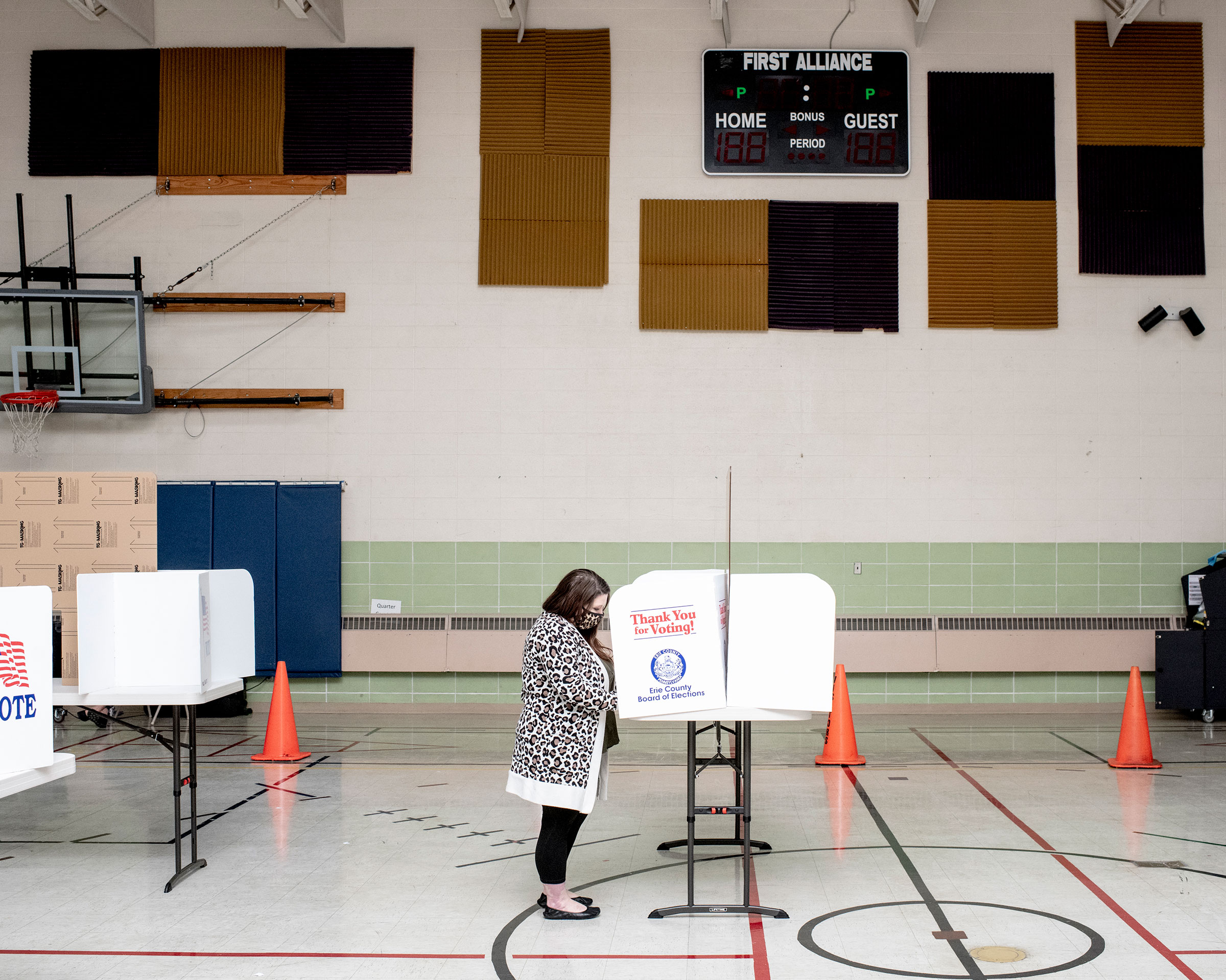 A voter inside the First Alliance church in Erie, Penn.

There were, of course, scattered instances of equipment malfunction and software glitches. The Department of Homeland Security is investigating shady robocalls that urged people to stay home and stay safe.

But, to this point, it seems like Americans took this election seriously and prepared for those eventualities. An early snow squall in New Hampshire did more to delay Granite Staters from casting their ballots than the feared efforts at voter intimidation or suppression that kept some local elections officials up at night.

Still, this is 2020. It’s best not to toast America until the very last ballots are cast with Alaska, where polls close at 1 a.m. Eastern.

— With reporting by W.J. Hennigen and Madeleine Carlisle

Write to Philip Elliott at philip.elliott@time.com and Sanya Mansoor at sanya.mansoor@time.com.