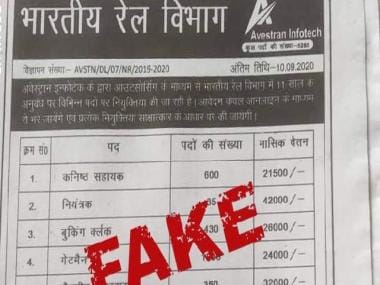 The Ministry of Railways has tweeted from its official Twitter handle that a recruitment notification that was circulating online, claiming to offer over 5,000 vacancies in Indian Railways is fake.

Clarification about an advertisement by a private agency in a newspaper regarding alleged recruitment in eight categories of posts on Indian Railways.

The Twitter account of the Ministry of Railways also shared images of the fake circular, writing, “Clarification about an advertisement by a private agency in a newspaper regarding alleged recruitment in eight categories of posts on Indian Railways.”

According to a statement issued by the Railway ministry, the advertisement by an organisation by the name of “Avestran Infotech” in a prominent newspaper on 8 August calling for application in eight categories, against a Rs 750 online fee is fake as “Advertisement for any Railway recruitment is always done by Indian Railways only.”

According to a report in Hindustan Times, the ministry also said that the railways have not authorised any private agency to do the recruitment of staff on its behalf.

As per the report, candidates must go to the official website of Indian Railways to verify the genuineness of any notification issued by them.

A report by NDTV said that in the railways, recruitment of various categories of Group ‘C’ and erstwhile Group ‘D’ posts is presently catered to by 21 Railway Recruitment Boards (RRBs) and 16 Railway Recruitment Cell (RRC) and not by any other agency. Vacancies for Indian Railways are filled up by giving wide publicity through Centralised Employment Notifications (CENs), the report further added.

CEN is published through Employment News or Rozgar Samachar and an indicative notice is given in National Daily and Local Newspapers.