You couldn’t invent a better metaphor for American politics in 2020 than the one that played out on TV Thursday, as the two men vying for the White House faced voters simultaneously but on competing networks. With the night’s planned debate canceled because the President—who was hospitalized with COVID-19 less than 72 hours after the first debate—refused to participate in a remote telecast, former Vice President Joe Biden had arranged a solo town hall on ABC News. Days later, NBC News announced a town hall with President Trump airing at the same time. It was the logical next step toward self-destruction for a politically polarized country where every attempt at dialogue between right and left has come to feel futile. Instead, viewers got to choose whether to watch Biden or Trump, old-school professionalism or new-school braggadocio, facts or “alternative facts”—and whether to have their biases confirmed or their blood pressure elevated.

Especially for partisans, as almost all of us are nowadays, it’s tempting to look for some way to blame this minor yet telling failure on one candidate or the other—or even just the constant squabbling between their campaigns. In truth, though the conflict started this way, the networks are responsible for resolving it in such preposterous fashion. This, it turns out, is what happens when you treat the democratic process like primetime entertainment. 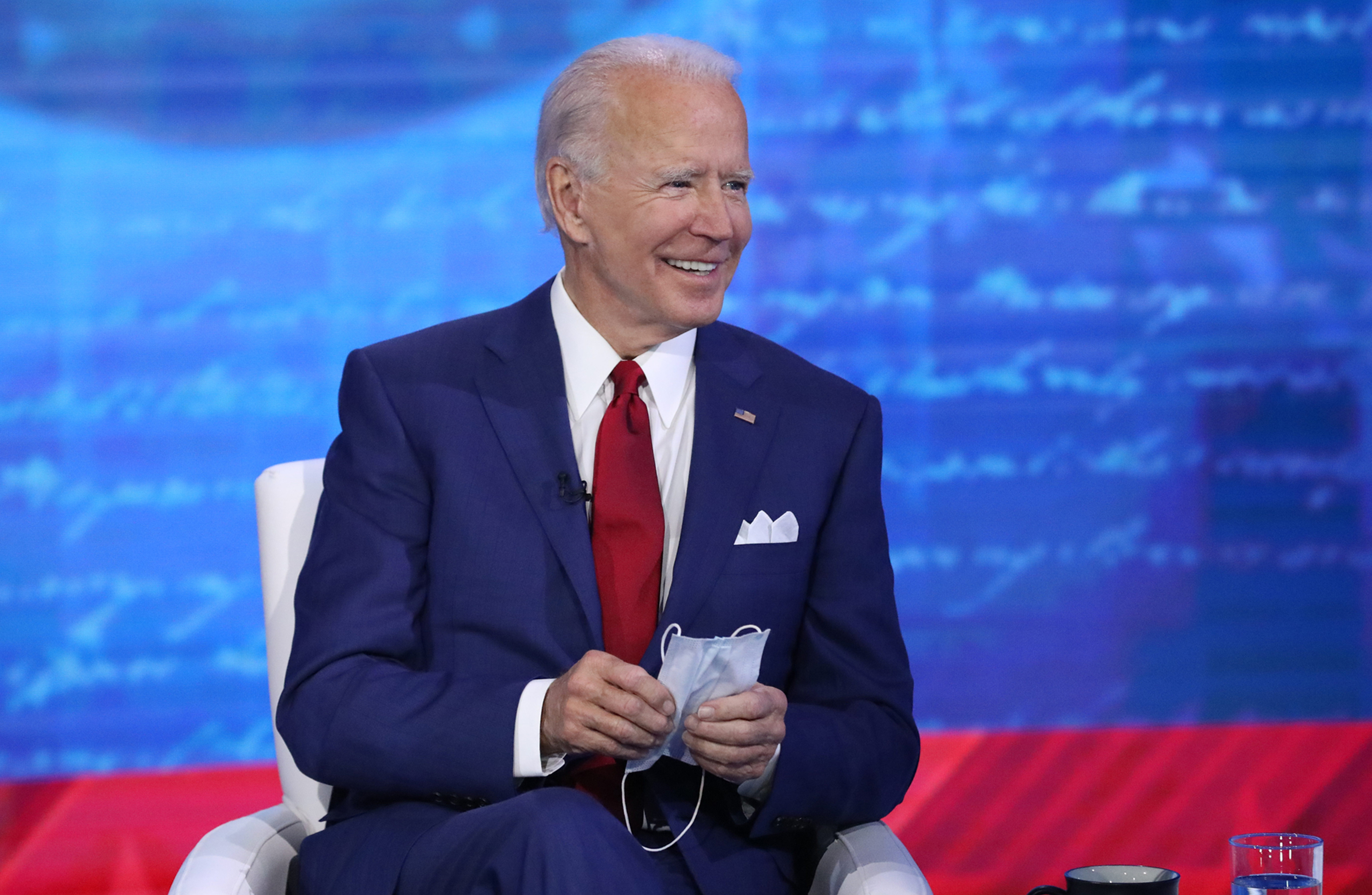 Democratic presidential nominee Joe Biden on Oct. 15, 2020 in Philadelphia, during ABC’s “The Vice President and the People”

Not that the dueling events were entirely gratuitous, in themselves. Biden benefited from the opportunity to speak calmly on the issues with a sparse, socially distanced crowd and host George Stephanopoulos without constant interruptions from his opponent. The 90-minute town hall opened with an extensive discussion of the pandemic, with the former VP painting a picture of greater preparedness, mask mandates and funding to keep schools and business open safely, as well as clear, science-based messaging from the executive branch: “It is the presidential responsibility to lead,” said Biden. He gave detailed, thoughtfully articulated, humble, if frequently longwinded responses to questions about tax policy, racist policing, the Supreme Court battle and transgender rights. And he was gracious when Stephanopoulos pressed him on controversial topics like court packing (though his answer to that particular query remained frustratingly ambiguous).

Trump, who on Thursday afternoon thanked NBC for its controversial decision to host him by quipping to a North Carolina crowd that “I’m being set up tonight” by “Concast” (a play on the name of NBC’s parent company, Comcast), struck a more aggressive tone with host Savannah Guthrie—who didn’t pull punches. He endeavored to frame his response to the pandemic as a best-case scenario, and promised good news for the economy and healthcare reform, while volunteering few details. He trotted out his usual cast of supposed villains: Biden, Nancy Pelosi, China, Antifa, the New York Times. In what was probably the most notable exchange of the hourlong program, Guthrie did manage to get the President, whose comments on the Proud Boys in the first debate fell far short of condemnation, to say the words “I denounce white supremacy.” Not so QAnon; Trump professed to know nothing about the conspiracy theory except that its adherents are “very much against pedophilia.”

None of this could have come as a shock to anyone who’s been following the election in good faith. More worrisome is the extent to which NBC’s thirst for ratings—which in 2015 led the network to book then-candidate Trump as an SNL host—was allowed to take precedence over voters’ right to hear both candidates take questions from regular people. Major political events are broadcast live and unedited for obvious reasons, even if DVR and streaming video give many the option to watch them after they air.

NBC has faced plenty of high-profile criticism for scheduling Trump opposite Biden—some of it solemn (“I am dismayed—more like disgusted,” wrote former NBC News executive Cheryl Gould, on Facebook) and some hilarious. “I can’t remember when I was this shocked by an NBC programming decision,” joked Conan O’Brien, who left the network in 2010 after a notoriously nasty battle with Jay Leno over The Tonight Show. Some of MSNBC’s left-leaning personalities, including Rachel Maddow and Chris Hayes, have appeared similarly bemused. An open letter to Comcast and NBCUniversal executives signed by such entertainment-industry giants as J.J. Abrams, Ryan Murphy, Ava DuVernay and Greg Berlanti argued: “By agreeing to air his town hall as counterprogramming opposite Vice President Biden’s town hall on ABC, you are enabling the President’s bad behavior while undercutting the Presidential Debate Commission and doing a disservice to the American public.”

That’s certainly true. But the larger takeaway from Thursday’s mess isn’t that ABC/Disney is the good guy and NBC/Comcast the villain. NBC News’ scheduling decision didn’t happen in a vacuum. It happened within the extremely competitive business of primetime television—one that has been floundering for years amid the rise of streaming, and one that has become desperate for content following months of COVID-related production delays. CNN’s Brian Stelter reported that network execs don’t see the choice to host town halls as “primarily profit- or ratings-driven,” along with a reminder that they do run ads against these telecasts, unlike official debates. But it still seems worth noting that the series premiere of quarantine sitcom Connecting…, a timely upstart which filled the same time slot for NBC last Thursday, drew an inauspicious audience of just 1.6 million.

We may never get corporate agendas out of American elections (see also: Citizens United). Even so, in such a chaotic political and media landscape, where the cancellation of a bipartisan debate can lead to competing primetime spectacles, broadcasters’ power over voters poses novel dangers. Maybe we need a specific rule preventing simultaneous televised events. Maybe we need tighter regulations on candidates’ TV appearances in general. That’s a question for political analysts, not TV critics. But one thing is certain: to repeat a common 2020 refrain, we can’t go on like this.