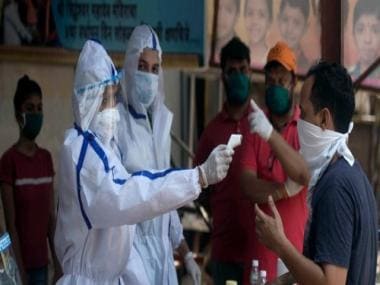 Coronavirus LIVE Updates: A senior health official said the state was witnessing a ‘peak curve’ with a positivity rate of around 16.24 percent

Coronavirus LATEST Updates: Yet another record high per day cases of 10,820 saw Andhra Pradesh’s COVID-19 tally rocket further up to 2.27 lakh on Sunday.

Karnataka health minister B Sriramulu said he has tested positive for coronavirus. Since the beginning of the outbreak, I have had the opportunity to visit the 30 districts and work towards fulfilling the government’s wish to ensure good treatment to people. It is on this backdrop that I am going to be hospitalized and get myself treated,” he tweeted. The minister also urged all those who had come into contact with him to take adequate precautionary measures.

Delhi reports 1,300 new coronavirus positive cases and 13 deaths today, pushing the total number of cases to 1,45,427 and toll to 4,111, according to a bulletin issued by the state government.

Speaking at the inauguration of a hospital in Ambedkar Nagar, Arvind Kejriwal said in case the situation takes a turn for the worse, the government is fully prepared to deal with it.

Fire tenders have been rushed to the spot. Seven people have lost their lives and 30 have been rescued, according to the Vijaywada Police.aR

Compared globally, India has one of the lowest cases per million at 1,469 as against the global average of 2,425 and added that the Case Fatality Rate stands at 2.04 per cent.

Meanwhile, 12,822 COVID-19 cases and 275 deaths due to the disease were reported in Maharashtra, the worst affected state by the pandemic, making the tally of the state cross the five lakh mark on Saturday. The state now has 5,03,084 confirmed cases, including 1,47,048 active cases and 17,367 deaths, according to the state health department.

Tamil Nadu, the second-worst affected by the pandemic reported 5,883 positive cases and 118 deaths from across the state today, according to the state health department. The total number of cases now stand at 2,90,907 in the state, including 53,481 active cases, 2,32,618 discharged patients and 4,808 deaths.

In Andhra Pradesh 10,080 new COVID-19 cases and 97 deaths were reported, according to the COVID-19 Nodal Officer in the state. The total number of case in the state are now at 2,17,040 including 85,486 active cases, 1,29,615 recovered cases and 1,939 deaths.
Meanwhile, Kerala on Saturday recorded a spike of 1,420 positive cases, with 485 cases being reported from state capital Thiruvananthapuram alone. Four deaths were also reported from across the state due to the disease today, according to Chief Minister Pinarayi Vijayan.

According to the daily COVID bulletin of the Punjab government 998 new COVID-19 cases were reported in Punjab in the last 24 hours, making the state tally rise to 22,928. The tally includes 7,506 active cases, and 14,860 cured/discharged patients, apart from 562 deaths being reported due to the disease.

The number of positive cases in Jammu and Kashmir reached 24,390 on Saturday, including 7,264 active cases. While Jammu has 1,756 active cases, Kashmir has a larger share of 5,508 active cases. A total of 16,667 patients have been cured and discharged in the union territory and a total of 459 deaths have been reported due to the disease.

Further, 169 people tested positive for COVID-19 in Manipur in the last 24 hours, taking total cases to 3,635 including 1,697 active cases, 1,927 discharges and 11 deaths, according to the state government today.

268 new coronavirus cases, 109 discharges and 5 deaths were reported from Puducherry today. The total number of cases in the union territory now stands at 5,087 including 1,953 active cases, 3,054 recovered patients and 80 deaths due to the infection.

The union territory of Chandigarh reported 52 new corona cases today. Taking the total number of cases to 1,426. The death toll due to the disease rose to 24 with one death being reported today. The number of active cases now stands at 529 in the union territory.