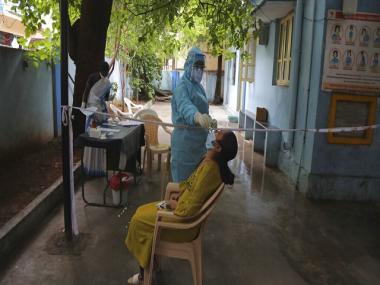 Coronavirus LIVE Updates: The new guidelines by MHA include spacing out equipment, staggering fitness sessions and disinfection of the premises.

Coronavirus LATEST Updates: The Union Health Ministry released the standard operating procedure for reopening gyms and yoga centres from 5 August. The new guidelines include spacing out equipment, staggering fitness sessions and disinfection of the premises.

Congress MP and son of former union minister P Chidambaram, Karti P Chidambaram took to Twitter on Monday to announce that he had tested positive for COVID-19

There are 5,79,357 active cases of coronavirus infection in the country at present while the recoveries have increased to 11,86,203

Karnataka Chief Minister BS Yediyurappa has been admitted to the hospital for observation. He is doing well, is clinically stable, reports ANI quoting Manipal Hospital Bengaluru.

The month of July, according to AP, accounted for more than 11 lakh of those cases. Seeing the rising cases, the Indian Premier League (IPL) Governing Council announced on Sunday that the IPL 2020 will be held in the UAE between 19 September and 10 November, while allowing unlimited replacements due to the precarious health situation. The Board of Control for Cricket in India (BCCI) in a statement said that the Women’s T20 challenge too will be held in the UAE.

Union Home Minister Amit Shah said he has tested negative for the virus and will be admitted to a hospital on doctor’s advice even though his health was fine. A close confidant of Prime Minister Narendra Modi, 55-year-old Shah made the announcement on Twitter.

The home minister also requested those who had come in contact with him in the last few days to get tested for coronavirus and isolate themselves. It was not officially disclosed where Shah was admitted but reports said that Shah had been admitted to the Medanta Hospital in Gurugram.

The last known public function which Shah attended was on Saturday at the Indira Gandhi National Centre for the Arts (IGNCA) where he addressed a webinar on the occasion of the 100th death anniversary of Bal Gangadhar Tilak. About 50 people were physically present at the event. Government sources told new agency PTI that the home minister was also present at the last meeting of the Union Cabinet held on Wednesday.

Union minister Babul Supriyo said that he was going into self-isolation as he had met Shah.

My sincere gratitude for all the Best Wishes.. Your prayers wil help Shri @AmitShah ji recover sooner than layer🙏As for me, I am cornered in my own ‘Home’ by my very own ‘Near & Dear Ones’ 😢 Books & a Harmonium – wil use this time for my ‘Software Upgrade’ 😀 https://t.co/0busQm7BL5

Late at night, Karnataka chief minister BS Yediyurappa said that he has also tested positive for the virus and is being hospitalised on doctor’s advice although the infection is mild.

I have tested positive for coronavirus. Whilst I am fine, I am being hospitalised as a precaution on the recommendation of doctors. I request those who have come in contact with me recently to be observant and exercise self quarantine.

The chief of Uttar Pradesh’s BJP unit, Swatantra Dev Singh, also said he has tested positive for COVID-19 and has quarantined himself at his home as per doctors’ advice.

On Sunday, Kamal Rani Varun, the only woman cabinet minister in the Uttar Pradesh, succumbed to COVID-19 at a hospital in Lucknow. She was 62. The Technical Education minister, who tested positive for COVID-19 on 18 July, breathed her last at the Sanjay Gandhi Postgraduate Institute of Medical Sciences (SGPIMS). She had comorbidities, including diabetes, hypertension and hyperthyroidism, a senior doctor at the hospital told PTI.

In Chennai, the Kauvery Hospital in a bulletin said that Tamil Nadu Governor Banwarilal Purohit (also a former BJP MP) has tested positive for COVID-19, but has been advised home isolation since his infection is mild.

The 80-year old Purohit was on self-isolation since July 29 after three people in the Raj Bhavan tested positive for the coronavirus.

“He is asymptomatic and clinically stable,” it said, adding the governor underwent further tests and assessment at the hospital located at Alwarpet area of the city.

“As the infection is mild, he has been advised home isolation and will be monitored by the medical team of Kauvery Hospital,” it added.

Meanwhile, megastar Amitabh Bachchan said that he has tested negative for COVID-19 and will be quarantined at home.

The 77-year-old actor was admitted to Mumbai’s Nanavati hospital along with son Abhishek after testing positive for COVID-19 on 11 July. Abhishek, however, said he is still COVID-19 positive and will remain under medical care.

I, Unfortunately due to some comorbidities remain Covid-19 positive and remain in hospital. Again, thank you all for your continued wishes and prayers for my family. Very humbled and indebted. 🙏🏽 I’ll beat this and come back healthier! Promise. 💪🏽 — Abhishek Bachchan (@juniorbachchan) August 2, 2020

This is the fourth consecutive day that COVID-19 cases have increased by more than 50,000

But recoveries also rose to over 11 lakh day, according to the Union Health Ministry data updated in the morning. There are 5,67,730 active cases of coronavirus infection in the country at present.

The recovery rate among COVID-19 patients has risen to 65.44 percent while the fatality rate has further dropped to 2.13 percent, said the health ministry.

The health ministry stressed that more than 70 percent of the deaths occurred due to comorbidities.

During the day, many states including Mizoram, Tamil Nadu, Goa, Andhra Pradesh and Maharashtra reported new cases and deaths

Mizoram reported its highest single-day spike of COVID-19 with 55 people being infected with the deadly virus, taking the northeastern
state’s caseload to 468. Goa too reported a record spike of 337 COVID-19 cases, propelling the infection count in the coastal state to 6,530, while the death of five people increased the toll to 53.

Tamil Nadu recorded 5,875 new COVID-19 cases taking the aggregate total to 2.57 lakh till date, while 98 more people succumbed to the virus on Sunday. Andhra Pradesh saw a marginal dip in its numbers. Against the 9,276 cases on Saturday after three days of 10,000 odd infections, fresh infections in the state further slid to 8,555, taking the overall count to 1.58 lakh.

The toll mounted to 1,474 with 67 new casualties in the last 24 hours while 6,272 more coronavirus patients recovered, the latest government bulletin said.

As cases continued to spike, the Indian Premier League’s Governing Council on Sunday decided to hold the  IPL 2020 in UAE and approved COVID-19 substitutions for the event. The tournament will be played from 19 September to 10  November at three venues in the UAE — Dubai, Sharjah and Abu Dhabi —subject to government approval, which is expected in the next couple of days.

“The 53-day tournament will witness 10 afternoon matches starting at 15:30 IST while the evening matches will start at 19:30 IST,” stated a release from the BCCI.

In another major decision, the IPL GC also approved the women’s IPL.

“Women’s T20 Challenge will also take place in the UAE and will comprise three teams with four matches to be played during the IPL Playoff week,” stated the Board’s press release.

In another development, the health ministry issued revised guidelines for international travellers arriving in India. According to the new guidelines, passengers flying to India from 8 August can skip institutional quarantine if they submit COVID-19 negative test reports. The RT-PCR test should have been conducted within 96 hours prior to undertaking the journey.

Ministry of Health & Family Welfare issues new guidelines for international passengers arriving into India, which will come in force from 12:01 am on August 8.

All travellers should submit self-declaration form on https://t.co/Ms9U7ZnJPf at least 72 hrs before scheduled travel. pic.twitter.com/3GyOQabugq

The test report should be uploaded on the portal www.newdelhiairport.in for consideration, the guidelines stated.

According to the guidelines, all passengers are required to submit an undertaking on www.newdelhiairport.in that they are willing to undergo seven days mandatory institutional quarantine at their own expense, followed by seven days home quarantine.

“If they wish to seek such exemption, they shall apply on the online portal at least 72 hours before boarding. The decision taken by the government as communicated on the portal will be final,” it said.

Each passenger shall also submit a declaration with respect to authenticity of the report and will be liable for criminal prosecution, if found otherwise. The test report could also be produced upon arrival at the point of entry at airport in India, it said.

The guidelines also included rules to be followed while boarding and de-boarding as well as during the travel.