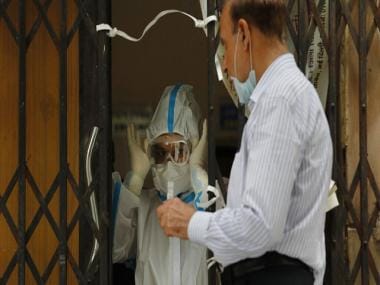 Coronavirus LIVE Updates: India is the third-worst affected -19 country by the coronavirus infection, which has claimed over eight lakh lives globally

Coronavirus LATEST Updates: India’s coronavirus case count raced past 30 lakh on Saturday, showed an unofficial tally based on information provided by staes and Union territories, while the toll rose to 56,762 and recoveries climbed to 22,71,054.

India is the third-worst affected country by the viral infection, said news agency PTI, which compiled the data.

The virus has claimed over eight lakh lives globally.

However, according to data released by Union Ministry of Health and Family Welfare on Saturday morning, the overall case count in India has climbed to 29,75,701 with the country recording its highest single-day spike of 69,874 new coronavirus cases. The toll climbed to 55,794 with 945 fatalities being reported in a span of 24 hours, the data updated at 8 am showed.

But the number of recoveries also surged to 22,22,577 pushing the recovery rate to 74.69 percent on Saturday while the fatality rate dipped to 1.87 percent, said the ministry.

India on Saturday also crossed the significant milestone of having conducted over 10 lakh tests in a day for the detection of the novel coronavirus, with more than 3.44 crore such tests conducted so far.

The COVID-19 case count in Telangana crossed the one-lakh mark with 2,474 new cases while the toll touched 744. In Jharkhand, Chief Minister Hemant Soren said his father, veteran Jharkhand Mukti Morcha leader Shibu Soren, and his mother Roopi, tested positive for the viral infection and are placed in home quarantine.

The home ministry, in its morning update, said that there are 6,97,330 active cases of coronavirus infection in the country, comprising 23.43 percent of the total caseload in the country.

Union Health Minister Harsh Vardhan, at the inauguration of a make-shift NDRF hospital in Ghaziabad, said that India has the “best” COVID-19 recovery rate, which is improving every day, and the “lowest” mortality rate in the world.

Taking a potshot at government critics, Vardhan said “many intelligent people, scientists and naysayers” had estimated that India, with a population of about 135 crore, will see 30 crore COVID-19 cases and about 50-60 lakh people will die by July-August, and the country’s healthcare system was “incapable” to combat the disease.

“However, I am happy to say that in the eighth month of the battle, India has the best recovery rate of 75 percent and against an estimate of 30 crore affected we have not even reached 30 lakh cases.”

“In fact, 22 lakh patients have recovered and gone home and another seven lakh are going to be cured very soon,” he said.

The minister said these successes were achieved due to the “coordinated” efforts with the participation of everyone — the government and the people.

Meanwhile, the Centre asked all states to ensure that there are no restrictions on inter-state and intra-state movement of persons and goods during the ongoing unlocking process. In a communication to chief secretaries of all states and Union Territories, Union Home Secretary Ajay Bhalla said there were reports that local level restrictions on movement were being imposed by various districts and states.

Drawing attention to the Unlock-3 guidelines, Bhalla said such restrictions are creating problems in inter-state movement of goods and services and are impacting supply chains, resulting in disruption of economic activity and employment.

The unlock guidelines clearly state that there shall be no restrictions on inter-state and intra-state movement of persons and goods, he said in the letter. The guidelines also stated that no separate permission, approval or e-permit will be required for movement of persons and goods for cross land border trade under treaties with neighbouring countries.

The home secretary said the restrictions amount to violation of the guidelines issued by Ministry of Home Affairs under provisions of Disaster Management Act, 2005.

Taking to Twitter, the chief minister said “respected father Dishom Guru ji” and mother were diagnosed with the disease on Friday night, and they are undergoing home quarantine. The 76-year-old president of the ruling JMM in the state is revered as ‘guruji’ (master) by his followers.

“With the blessings of the people of Jharkhand and the entire country, they will soon be among us, the CM tweeted.

The chief minister, who lives at his official residence, close to the JMM chief’s government bungalow, will undertake the test on Monday — third time in two months. Earlier, Hemant had taken the test on two separate occasions — first time after coming in contact with infected
Cabinet colleague Mithilesh Thakur, and the second time after 17 employees at his office were diagnosed with the disease.

On Tuesday, state health minister Banna Gupta was diagnosed with the disease.

“I wish him a speedy recovery and look forward to him joining us at work soon,” said Singh.

My Cabinet colleague and Cooperation & Jails Minister Sukhjinder Singh Randhawa has tested positive for #Covid19. I wish him a speedy recovery and look forward to him joining us at work soon.

Telangana’s overall case count rose to 1,01,865 as 2,474 new cases were added. With seven more people succumbing to the virus, the toll in the state mounted to 744. However, the state’s recovery rate at 77.29 percent was higher than the country’s recovery rate of 74.69 percent.

Maharashtra, Andhra Pradesh, Gujarat and West Bengal were among the other states which added high numbers to their case tallies.

Gujarat its highest single-day spike of 1,212 new COVID-19 cases, taking the total count of infections to 85,678, the state health department said. The number of fatalities rose by 14, including six in Surat, which is the highest in the state, to 2,883, it said.

A total of 980 patients were discharged in the day, taking the number of recoveries to 68,257, the department said, adding that the recovery rate has reached 80 percent.

With a record 3,232  new cases in a single day, West Bengal’s caseload went up to 1,35,596. The toll reached 2,737 with 48 more people succumbing to the disease, said a bulletin issued by the state health department.