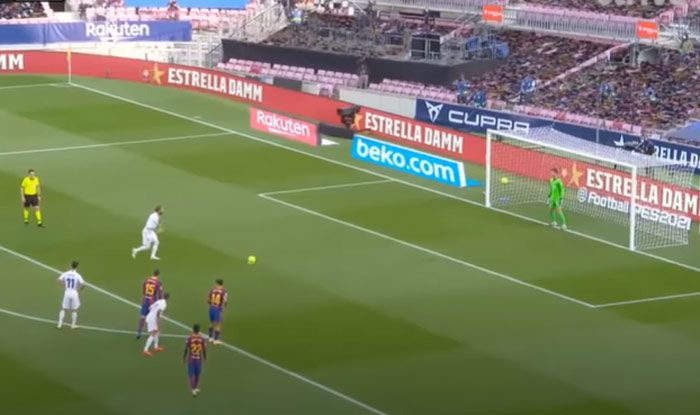 What was termed as “The least Clasico of Clasicos” by a Spanish daily, defied the predictions, producing a pulsating contest that saw Real Madrid beating Barcelona 3-1 at Camp Nou on Saturday. Federico Valverde had given the visitors a dream start in the fifth minute by slotting home the opener before Barca wonderkid Ansu Fati rewrote history by becoming the youngest scorer in El Clasico history bringing the contest on level terms three minutes later. Also Read – Who is Ansu Fati – The Youngest Goal-Scorer in El Clasico History

Real though were the better team with the first half ending 1-1 but after the break, it was Barcelona who looked more determined. Lionel Messi was showed his brilliance and there were moments when it seemed he would take the game away from Real singlehandedly. Also Read – El Clasico 2020 Live Streaming Barcelona vs Real Madrid: Preview, When And Where to Watch BAR vs RM Live TV Broadcast, Online Live Streaming, Fantasy Predictions, Timings in India

However, it was Zinedine Zidane’s men who would have the final say with captain Sergio Ramos winning a penalty after being brought down by Clement Lenglet. He duly converted in the 63rd minute restoring the one-goal advantage. Also Read – La Liga President Warns Lionel Messi Will Damage His Reputation if he Leaves Barcelona

Substitute Luka Modric then rounded off the contest with a strike of his own in the 90th minute.

Real manager Zidane said he’s proud of how his team performed. “We do our job, believing in what we do, being together when we have to be and that’s what we did. We did it as a team, I’m very proud of them,” he was quoted as saying by Goal.

“When it comes to defending we had a compact block. Then with a rival open like Barca, we’ve found gaps two or three times and in the end, it’s about trying to play a good game as a team and that’s what we did,” he added.

Real will next face Borussia Monchengladbach in a Champions League group match while Barcelona will next take on Juventus.