Three people have died at well number 5 at Baghjan, which has been spewing gas uncontrollably since 27 May and caught fire on 9 June 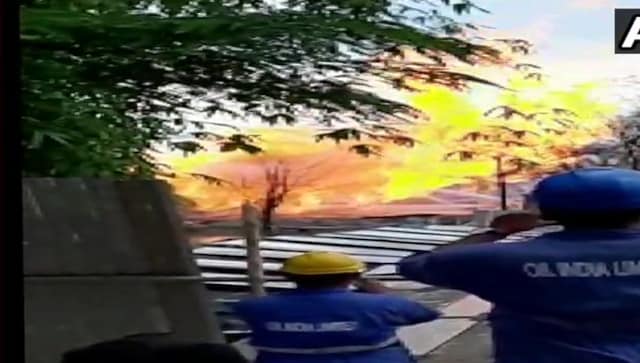 A fire broke out at the Baghjan oil well in Assam on 22 July. ANI

Guwahati: A 25-year-old engineer of Oil India died due to high voltage electric shock on Wednesday when he was working at the PSU major’s damaged gas well site in Baghjan in Assam’s Tinsukia district, officials said.

“He was provided emergency healthcare by doctors at the site and was taken to the AMC (Assam Medical College and Hospital) where he was declared dead,” he added.

The company said that the exact reasons for the death will be known after a post-mortem. “This is a very tragic incident and has created a pall of gloom in OIL. A Team from OIL is carrying out inspection at well site to find out possible reasons for this accident,” it tweeted.

According to company sources, Bordoloi was working on high voltage cables at the site when the incident happened around 2 pm.

With this, the total number of persons losing their lives in the worst industrial disaster of Assam has gone up to three.

The well number 5 at Baghjan has been spewing gas uncontrollably since 27 May and it caught fire on 9 June, killing two of OIL’s firefighters at the site.

On 22 July, three experts from Singaporean firm Alert Disaster Control, which was asked to assist OIL and ONGC experts for putting out the inferno, received burn injuries while they were removing a spool from the wellhead.

Assam Commerce and Industry Minister Chandra Mohan Patowary said in the assembly on 2 September that a team of experts from Canada were on their way to Baghjan and two more months are likely to take for experts to douse the flame.

In the meantime, OIL tried to control the fire at the well temporarily by shifting the flowing gas through a diverter and then producing the gas in two parallel lines, but that attempt failed on 7 September.

On 17 August, OIL had achieved the first successful step towards dousing the blaze when it could place the Blow Out Preventer in its third attempt at the mouth of the damaged gas well.

However, it suffered a setback two days later when it had to suspend works for dousing the blaze after the casing valve used during the operation ruptured.

The Blow Out Preventer (BOP) is a very heavy metal cover weighing several tonnes that is placed at the mouth of any gas or oil well to stop leakage from under the ground.

Patowary had also said that total 3,000 families were shifted to relief camps and the OIL along with the government are taking care of them.