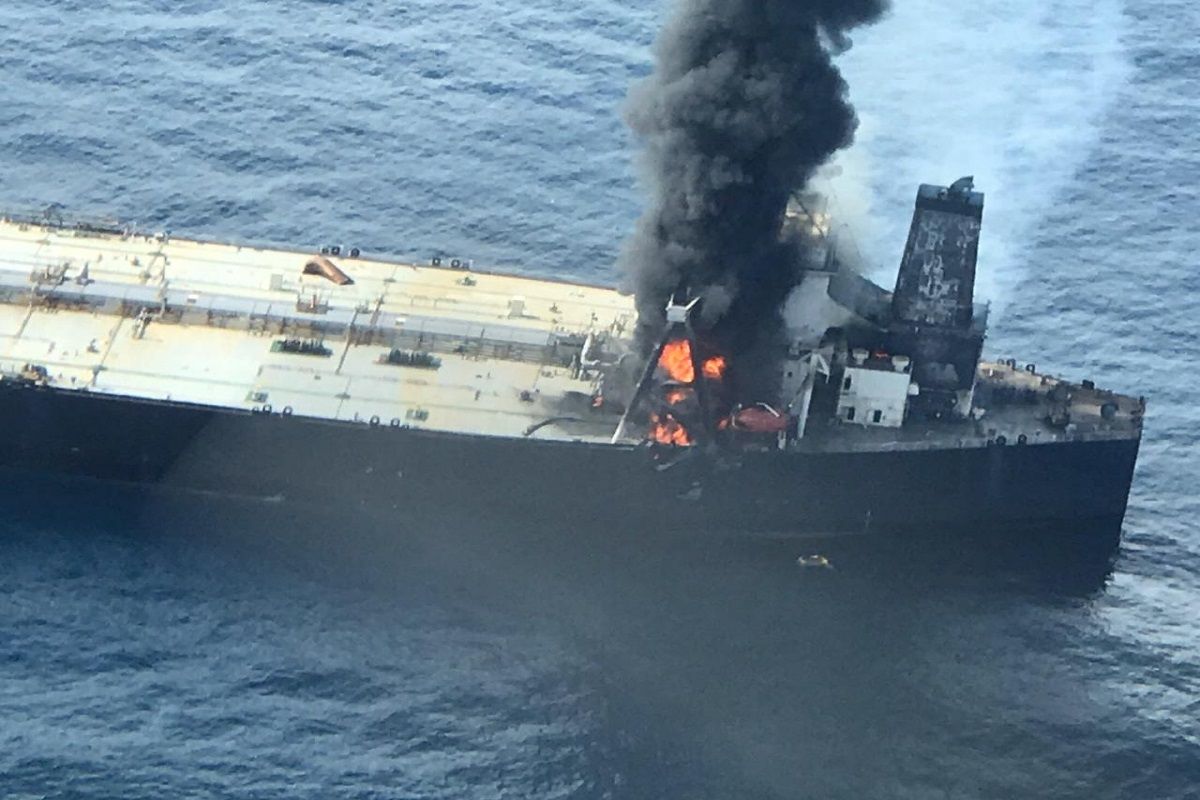 New Delhi: Oil tanker ‘New Diamond’, laden with about 3,00,000 tonnes of Kuwaiti crude, has been towed more than 35 nautical miles away from Sri Lankan coast to safe waters even as operation to control fire onboard continued for the third day on Saturday, the Indian Coast Guard said. Also Read – Heavy Rains Lash Parts of Delhi NCR, Waterlogging in Southern Avenue, Teen Murti Area

The coastal security agency said that the fire on the very large crude carrier (VLCC) was burning, but on a reduced scale and that there was no oil slick. Also Read – Australian Commission Confiscates Rs 14 Lakh Alligator Handbag as Woman Fails to Get Rs 3700 Import Permit

The fire was brought under control on Friday evening.

According to the Coast Guard, with the coordinated efforts of the Sri Lankan ships and aircraft, the ALP Winger vessel successfully towed ‘New Diamond’ away from the island nation’s coast.

The 20-year-old VLCC, sailing under the Panama flag, reported fire on Board on Thursday when it was about 37 nautical miles off the coast in Sri Lankan Exclusive Economic Zone.

According to the Coast Guard, the vessel reported a major explosion in its engine room while it was on its way to Pradip in Odisha where the IOC has a large refinery.

The first information about the vessel fire was received at the Coast Guard Maritime Rescue Co-Ordination Centre (MRCC) in Mumbai.

After intense and continuous efforts, the fire has been localised at the Port Bridge Deck and Aft Ready Use tank area, the Coast Guard had said on Friday.

A Coast Guard official had told IANS that the cargo pumping facility was also intact and that cargo area was not affected.

The Coast Guard had also said a two-metre crack has been observed near the port aft portion of New Diamond, 10 metres above the waterline.

A Coast Guard official, however, told IANS that the crack has not grown further.

A multi-pronged strategy is being undertaken to prevent an oil spill from the massive vessel.

The Indian coastal security agency said it had deployed six of its ships and two aircraft for firefighting and to handle pollution response in event of an oil slick.

The Coast Guard ships Sujay, Shaurya and Sarang are in action since Thursday in the firefighting operation by using specialised external firefighting system along with Sri Lanka ships/tugs.

Another tug TTK-1 arranged by Salvors joined along with Coast Guard ships, Tug Ravana and Tug Vasabha are also involved in the firefighting operations.

Aerial recce by Sri Lankan Air Force Beachcraft and spraying of water through Bambi Bucket by the island nation’s Air Force MI-17 is in progress.

The Coast Guard also said that emergency towing vessels from Mumbai and Chennai have been sailed for augmenting salvage and firefighting operations.

Meanwhile, officials of the IOC were not available for comments.