(NEW YORK) — Hal Holbrook, the award-winning character actor who toured the world for more than 50 years as Mark Twain in a one-man show and uttered the immortal advice “Follow the money” in the classic political thriller “All the President’s Men,” has died. He was 95.

Actors across the spectrum mourned Holbrook’s passing, including Bradley Whitford, who called him an “incredible actor” and Viola Davis, who wrote “RIP to the always wonderful Hal Holbrook.”

Holbrook pursued a busy career in theater, television and movies, winning five Emmys and a Tony. His more than two dozen film credits ranged from Steven Spielberg’s “Lincoln” to Oliver Stone’s “Wall Street.” He was a steady presence on TV as well, having appeared on such shows as “The West Wing,” “Grey’s Anatomy” and “Bones.”

But his most famous movie role was as a key source for Washington Post reporter Bob Woodward (played by Robert Redford) in the 1976 adaptation of “All the President’s Men,” the bestselling account by Woodward and fellow Post reporter Carl Bernstein about their investigation of Richard Nixon’s administration and the Watergate scandal that led to his resignation.

Holbrook played the mysterious informant “Deep Throat” (later revealed to be FBI official Mark Felt) who provided key information to Woodward. The most famous tip, uttered from the shadows of a parking garage — “Follow the money” — became an instant catchphrase but was never said in real life. The line was invented by screenwriter William Goldman.

“Follow the money” may have been his most famous film words, but Twain was his defining role. The association began in 1954 when an instructor at Ohio’s Denison University gave Holbrook the role as part of a thesis assignment.

Holbrook and his first wife, Ruby Johnson, later created a two-person show, playing characters from Shakespeare to Twain. After their daughter, Victoria, was born, he started working on a one-man Twain show while working on the soap opera “The Brighter Day.” 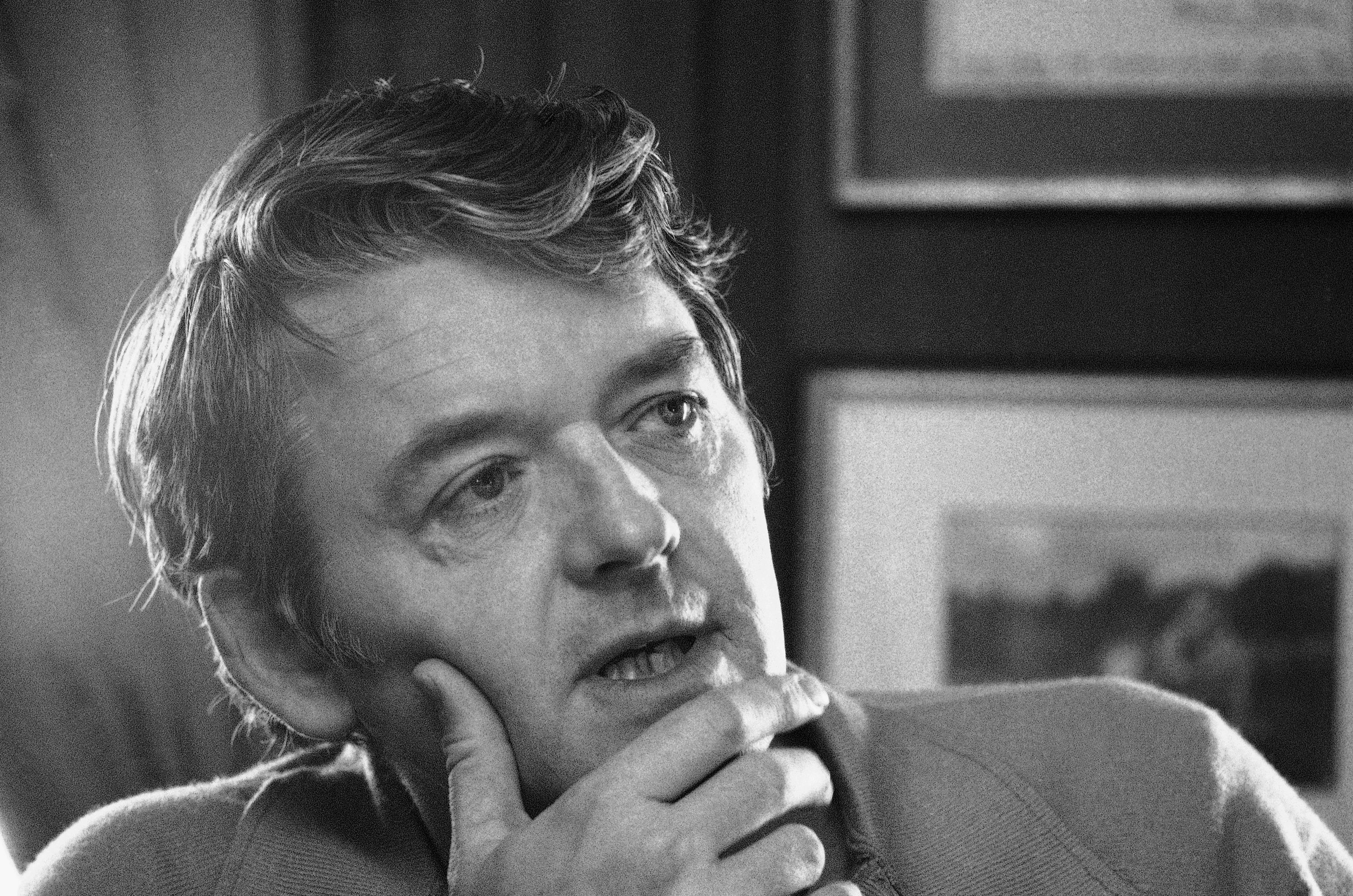 Actor Hal Holbrook appears during an interview in his New York apartment on Feb. 8, 1973.

Holbrook, raised in Cleveland, was 29 when he first performed as Twain (who was portrayed as 70) and eventually developed the role into a two-act, one-man show called “Mark Twain Tonight!,” taking it to schools, nightclubs and theaters. He took it to Broadway three times — 1966, 1977 and 2005 — and won a Tony Award as best dramatic actor for the 1966 version.

“The truth is that he’s been wonderful company,” Holbrook told The Plain Dealer newspaper in 2017. “It would be an understatement to say I like him. He never ceases to amaze me. Even after all these years, I’m still stunned by his insight into the human character. So much of what he had to say more than 100 years ago is right on the money for today.”

In 1959, after years of honing his material in small towns, Holbrook debuted his Twain at an off-Broadway theater in New York to high critical praise. “Mr. Holbrook’s material is uproarious, his ability to hold an audience by acting is brilliant,” said The New York Times. The New Yorker called it a “dazzling display of virtuosity.”

Holbrook would tour as Twain — with the writer’s familiar white suit and white hair — whenever he wasn’t busy with other acting jobs. He would update the show to fit the times and performed the role by his account some 2,200 times. He hung up the white suit in 2017.

“He did a ton of work over the years, never less than first-rate, but the Twain performances approached perfection, and they will stay with me forever,” tweeted Michael McKean.

He was meticulous in his preparations, taking as long as 3 1/2 hours to don his makeup and insisting on oversized stage furniture so that, at 6 feet tall, he wouldn’t appear larger than the 5-feet-8 1/2-inch Twain was. He read books by and about the author and scoured newspaper files in search of interviews with Twain and stories about his lecture tours.

During a performance on the open-sided stage at Wolf Trap near Vienna, Virginia, lightning flashed and thunder cracked just as Holbrook reached toward the humidor for a cigar. He scuttled backward. A roar of laughter followed. Holbrook looked out over his glasses at the audience. When he could be heard again, he spoke: “He wasn’t talking to you.”

When he wasn’t portraying Twain, Holbrook showed impressive versatility. He was Burt Reynolds’ crotchety father-in-law in the 1990s TV series “Evening Shade.” He appeared as Abraham Lincoln in two different miniseries on the 16th president and won one of his Emmys for the title role in the 1970-71 TV series “The Senator.”

Other notable stage credits included “After the Fall,” “Abe Lincoln in Illinois” and “I Never Sang for My Father.” In 2008, at age 82, he received his first Oscar nomination for playing a lonely widower who befriends young wanderer Christopher McCandless (Emile Hirsch) in director Sean Penn’s “Into the Wild.”

In 1980, he met actress Dixie Carter when both starred in the TV movie “The Killing of Randy Webster.” Although attracted to one another, each had suffered two failed marriages and they were wary at first. They finally wed in 1984, two years before Carter landed the role of Julia Sugarbaker on the long-running TV series “Designing Women.” Holbrook appeared on the show regularly in the late 1980s as her boyfriend, Reese Watson. She died in 2010.

Holbrook had two children, Victoria and David, with his first wife, and a daughter, Evie, from his second marriage to actress Carol Rossen. He was stepfather to Mary Dixie Carter and Ginna Carter.

Biden Wants to Reopen Schools Quickly. That Might Not Happen