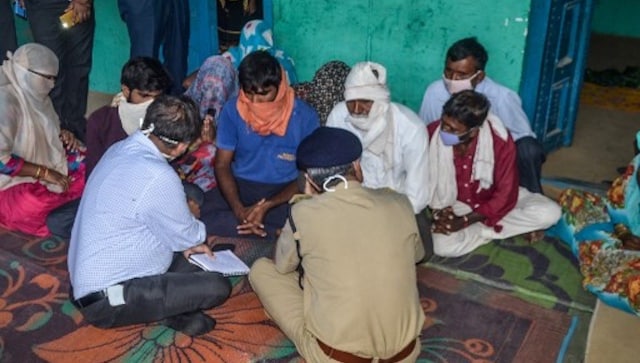 Police personnel interact with relatives of the 19-year-old woman allegedly gang-raped and killed by four men in Hathras district in Uttar Pradesh. AFP

The Uttar Pradesh government on Tuesday told the Supreme Court that the body of the 19-year-old Dalit woman, who was brutally tortured and gang-raped allegedly by four upper-caste men in Hathras district, was cremated at night to avoid “large-scale violence”.

The apex court, terming the rape as ‘horrible’, directed the Uttar Pradesh government to inform it by 8 October about the steps taken to protect witnesses, as per PTI.

The state government said that despite its “diligent probe” into the Hathras case, “different false narratives started gaining momentum at the behest of some vested interests”.

The Yogi Adityanath government in an affidavit further recommended a Central Bureau of Investigation (CBI) probe into the case as it would obviate hindrance being created by certain vested interests in the fair and impartial investigation. The affidavit said the state government has already requested the Central government to take over the investigation through CBI.

In the affidavit to the apex court, the state also claimed the victim’s family was present for the cremation and “agreed to attend to avoid further violence”,  Indian Express reported.

As per NDTV, the state government justified the 2.30 am cremation by saying there was a high alert in the district because of the Babri mosque verdict a day later and coronavirus safety rules. The cremation was performed with “full rites and customs” at night only to maintain law and order, the affidavit claimed.

It told the Supreme Court that the district administration of Hathras had been receiving “several intelligence inputs since the morning of 29 September of the manner in which the dharna had taken place at Safdarjung hospital and the whole issue was being exploited and a caste/communal colour was being given”.

The state claimed it had received specific inputs that lakhs of protestors of both communities/castes along with supporters of political parties and media would assemble the next morning at the village “which is likely to turn violent and will lead to major law and order problems”, reported NDTV.

‘Inform on steps to protect witnesses’

The apex court directed the Yogi Adityanath government to file an affidavit regarding and also ascertain whether the victim’s family has chosen a lawyer, as per PTI.

A bench comprising Chief Justice SA Bobde and justices AS Bopanna and V Ramasubramanian said it will ensure that the investigation is smooth.

The top court also told all parties appearing before it to give suggestions on the scope of proceedings before the Allahabad High Court and how the apex court can make it more relevant.

Jaising said the family has expressed that they are not satisfied with the CBI taking up the case and said an SIT, monitored by the apex court, should probe the case.

At this point, the bench asked Jaising what her locus standi was.

Advocate Kirti Singh, appearing for few woman lawyers, said the probe should be under the supervision of the court.

The apex court said this is a horrible incident but it does not want repetitive arguments in court.

“It is horrible incident but the question is how many similar arguments should we hear? Please understand that there is no need to duplicate concerns in the court of law,” the bench said.

“Court of law need not hear the same argument by every party. This is not a comment on the incident but please understand our point of view,” it added, as per PTI.

Meanwhile, a Special Investigation Team investigating the case, visited the crime scene on Tuesday morning. The panel, formed by the Yogi Adityanath government, will submit its report on Wednesday.

The state government has also sought a CBI probe into the FIR related to the alleged criminal conspiracy to spread caste conflict, instigating violence, incidents of vicious propaganda by sections of media and political interests.

On Monday, chief minister Yogi Adityanath accused the Bharatiya Janata Party’s political opponents of attempting to conspire against it by “trying to lay a foundation for caste and communal riots through international funding”, reported ANI.

The state government filed an FIR against unknown persons for attempting to trigger ‘caste-baste conflict’.

The Dalit teen died of grievous injuries in a Delhi hospital on 29 September, a fortnight after she was gang-raped allegedly at her village by four upper-caste men.

“We Owe It to Future Generations to Explain Why.” How Robert McNamara Came to Write His Memoirs About Vietnam