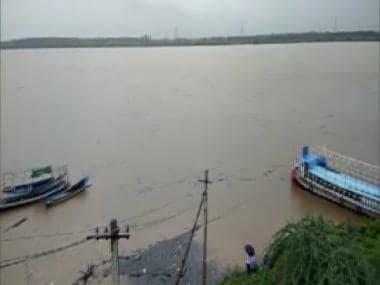 While reviewing the situation district-wise, the chief minister directed that two control rooms be set up in Hyderabad

Hyderabad: Telangana Chief Minister K Chandrasekhar Rao had asked officials to be on alert in view of heavy rains in the state and told ministers to stay put in their respective districts and have regular coordination with the officials.

Several tanks and canals are overflowing due to heavy rains and the floodwater inundated the roads at some places, an official release said.

Rao, who spoke to ministers, Chief Secretary and DGP and reviewed the situation district-wise, directed that two control rooms be set up in Hyderabad.

He asked the ministers to stay put in their respective districts and be in touch with district Collectors and police officials on a regular basis, it said.

“The Chief Minister said since several tanks were filled to the brim, they may breach, roads may be inundated and low-lying areas may be flooded,” it said.

The officials in Karimnagar and Warangal districts (as they existed before the reorganisation of districts) should be alert in view of the heavy rainfall there, he said.

As per Rao’s instructions, the officials have kept two helicopters ready for rescuing those stranded in the floods.

Along with the helicopter owned by the state government, one chopper from the military has also been kept ready for use, the release said.

Following Rao’s directives, Chief Secretary Somesh Kumar on Saturday held a teleconference with district collectors and took stock of the arrangements put in place for handling the situation arising out of incessant rains, a separate official release said.

Speaking on the occasion, the Chief Secretary asked the Collectors to be on high alert as indications are that rains may continue for a few more days.

He urged all the officials to remain in headquarters, work in close coordination and ensure that no loss of lives or property takes place in the state, it said.

He cautioned the district Collectors to be vigilant in respect of tanks situated near the railway lines and also those tanks which are vulnerable and likely to be breached.

Kumar urged the district Collectors to set up a round-the-clock control room in their districts to maintain a close watch.

He said a state control room (040-23450624) has also been set up and operationalised immediately.

Anyone having any problems can contact the control room, the release added.

According to official data, Bejjur and Yelkapalle in Kumram Bheem Asifabad district received 97 mm and 84 mm of rainfall respectively between 8.30 am and 4 pm on Saturday.

Several other places in the state received moderate rainfall, the data showed.

In its weather warning for Telangana, the MeT Centre of the IMD in Hyderabad said thunderstorms accompanied with lightning are very likely to occur at isolated places over Telangana on 16 August.

Heavy to very heavy rain is very likely to occur at isolated places over Telangana on 16 August, it said.