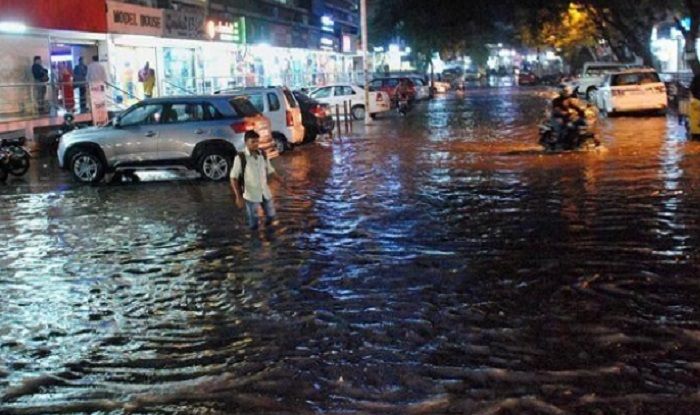 According to official data (from 8.30 AM to 10 pm on Saturday), Singapur Township in Medchal Malkajgiri district received 157.3 mm of rainfall, followed by 153 mm of rain at Bandlaguda near Uppal in the city. Several other areas in the city also witnessed downpour. Also Read – Hyderabad: Water From Overflowing Ramanthapur Lake Enters Homes, Residents Use Boats to Commute

Saturday’s rain damaged Falaknuma bridge in the city which leads to Mehboobnagar, forcing officials to shut that road. Also Read – In Pics: No Respite From Heavy Rains in Hyderabad, Several Areas Water-Logged

Panic gripped among public after the collapse of the Gurram Cheruvu aka Balapur lake bund. This resulted in the inundation of many residential areas like Hafiz Baba Nagar, Omer Colony Nabeel Colony, and other adjoining areas.

The Disaster Response Force (DRF) personnel of the Greater Hyderabad Municipal Corporation (GHMC) were continuously working on the field clearing water stagnations and inundations and all possible measures were being initiated in view of the rainfall, Vishwajit Kampati, Director, Vigilance and Disaster Management of GHMC, said in a tweet.

Officials advised people to stay at home as the rain has flooded many parts of the city. In case of danger, people have been advised to call 100.

Meanwhile, the Met department forecast thundershowers at most places in Telangana over the next four days, accompanied by lightning.

Speaking to reporters, Telangana minister KT Rama Rao had said that flood-hit families will be identified and given ration kits at their doorstep. According to a government release, each kit, costing Rs 2,800, will contain one month’s ration items and three blankets.