My great-grandmother Ida B. Wells was a suffragist. You probably have not heard her described this way before. She is most often honored for her journalism exposing lynchings in the South. To me, she is what great-grandmothers are to many: a teacher. From Ida, I learned that there is no end to a fight for justice. While most famous suffragists—Alice Paul, Carrie Chapman Catt—ended their fight in 1920, Ida did not. She continued to push for Black women’s voting access for the rest of her life, and taught me lessons that I take into my fight for suffrage. I, too, am a suffragist, because in 2020 many Americans still do not have access to the vote.

I grew up hearing about Ida’s willingness to speak up against injustice, inequality and indignity. About her refusal to be silenced, sidelined or marginalized. I heard about the time she wouldn’t go to the “colored car” on the Chesapeake, Ohio and Southwestern Railroad in 1884, and rather than leave the car, for which she had purchased a ticket, she was forced off. She promptly secured an attorney and sued the railroad. I heard about the time when, in 1892, three of her friends were lynched because they owned a grocery store that competed against a white-owned store, and she wrote about it so much in the Memphis Free Speech newspaper that her own life was threatened. She encouraged Black people to use what little power they had to protest, to boycott and ultimately to leave Memphis if they had the means to do so. She was not interested in being second in anything.

She learned that pride and deserving attitude from her father, my great-great-grandfather James Wells, who spent most of his life enslaved in Mississippi. After the Civil War ended and Black men got the right to vote through the 15th Amendment in 1870, he and his friends met at the house to talk politics. He encouraged Ida, who was among the first generation of formerly enslaved people to legally become educated, to read the newspaper to them. She learned that people should be politically and socially engaged in shaping their own destiny. She learned that her voice was important.

When her father cast his vote for a different candidate than the man who had enslaved him suggested, he lost his carpentry tools and house. Rather than be discouraged, he rebuilt and continued to live life on his own terms. Ida learned from her father to do what was in her heart and be willing to suffer the consequences. Sometimes the price of dignity came with the loss of something else. And that was O.K.

In 1913, the women of Illinois gained partial suffrage, which gave them the ability to vote in presidential and municipal elections. Ida dove into taking advantage of this new right. With the assistance of two white colleagues, Belle Squire and Virginia Brooks, she founded the Alpha Suffrage Club—the first all-Black suffrage club in the state—in order to exercise the power of the vote. She was also selected to represent the club at the 1913 Suffrage Parade in Washington, D.C., with the integrated Illinois delegation. 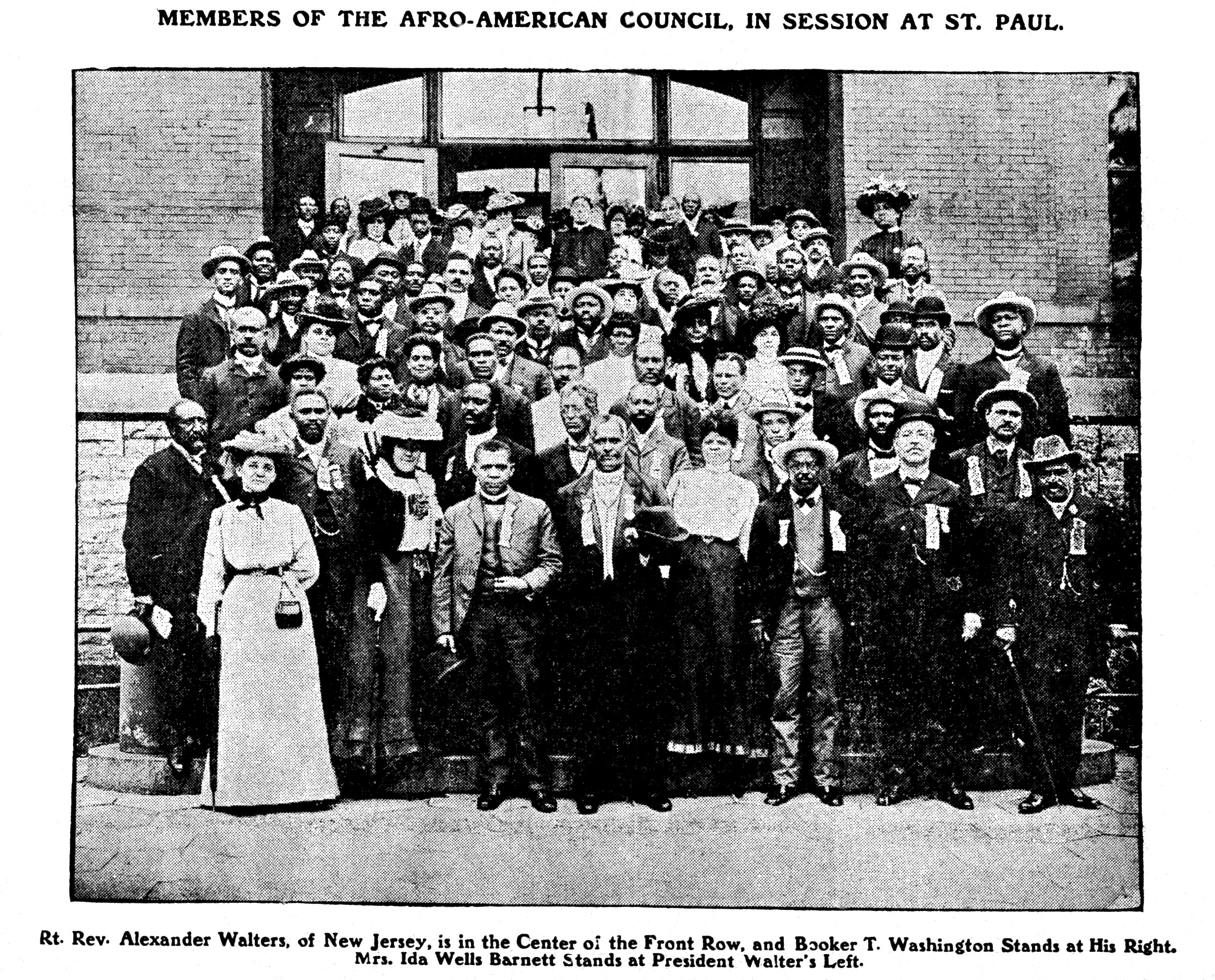 Ida B. Wells stands prominently, near Booker T. Washington, at the 1902 gathering of the National Afro-American Council

In deference to Southern white women, the organizers of the parade asked Black women to march in the back. My great-grandmother famously refused that request. After all, she was 50 years old, had been fighting for racial and gender equality for more than 30 years, and had founded a suffrage club herself. She was not about to comply with a request from white women who were half her age, or any white woman for that matter. As the parade proceeded down Pennsylvania Avenue, my great-grandmother took advantage of the chaos, “got lost” in the crowd, then inserted herself front and center of the Illinois delegation. She deserved to have that place in history, and she knew it.

Ida’s refusal to comply fortifies me whenever I face my own dilemmas of making myself small in order to placate someone else. Do I remain silent and compliant, or do I speak up? Do I play their game in order to make them feel comfortable, or do I run the risk of being considered “difficult” and be true to myself? I must speak up. I must not accept mistreatment silently.

In 1920, 100 years ago this month, the 19th Amendment was adopted, theoretically giving women the vote on a national basis. But the fight for women’s suffrage did not end in 1920. Many women of color were unable to vote until the Voting Rights Act was signed in 1965 and extended in 1970 and 1975. When we honor suffragists, we should not only think of Susan B. Anthony, Elizabeth Cady Stanton or even my great-grandmother; women of color in more recent history rightfully need to be considered among them. African Americans, such as Fannie Lou Hamer and Ella Baker, and Latinx women, including Dolores Huerta and Felisa Rincón de Gautier, fought for suffrage well into the 1960s and beyond. Even today we are witnessing efforts to implement barriers to voting that disproportionately affect communities of color. Even today we are fighting for suffrage.

There are increasingly strict requirements for voter IDs that are more difficult for people of color and younger voters to obtain. Laws in targeted areas that now require voters to have a street address, which discriminates against people who use P.O. boxes or do not have a permanent physical address. Fewer voting materials available in different languages. Voter-roll purges eliminating millions of eligible people of color based on small discrepancies in how their names appear or how recently they last voted. The disenfranchisement of those with felony records in most states. Lack of funding for elections in specific districts, which has contributed to malfunctioning voter machines in areas that are highly populated with people of color. Reduction of early voting days and hours—plus last-minute changes in voting locations that have disproportionately targeted communities of color—which effectively makes voting impossible for people who do shift work or lack flexible work hours. The combination of all of these barriers has reduced the number of people of color who have been able to cast their votes.

More than 100 years ago, my great-grandmother fought so that all women could win. She showed up. She wrote, organized, spoke and advocated for change while raising four children. Little did she know that women of color would need to fight for several more decades. Now, 89 years after she died, it’s time for white Americans—all Americans—to continue the fight for her.

During this centennial year of the 19th Amendment, it is important and exciting to acknowledge the determination and sacrifice of those who worked to pass it. But in the midst of the tributes and celebrations, we need to dismantle the false narrative of a whites-only suffrage movement and broaden the scope to be inclusive and reflect reality. The next generation is watching and will be inspired by the truth.