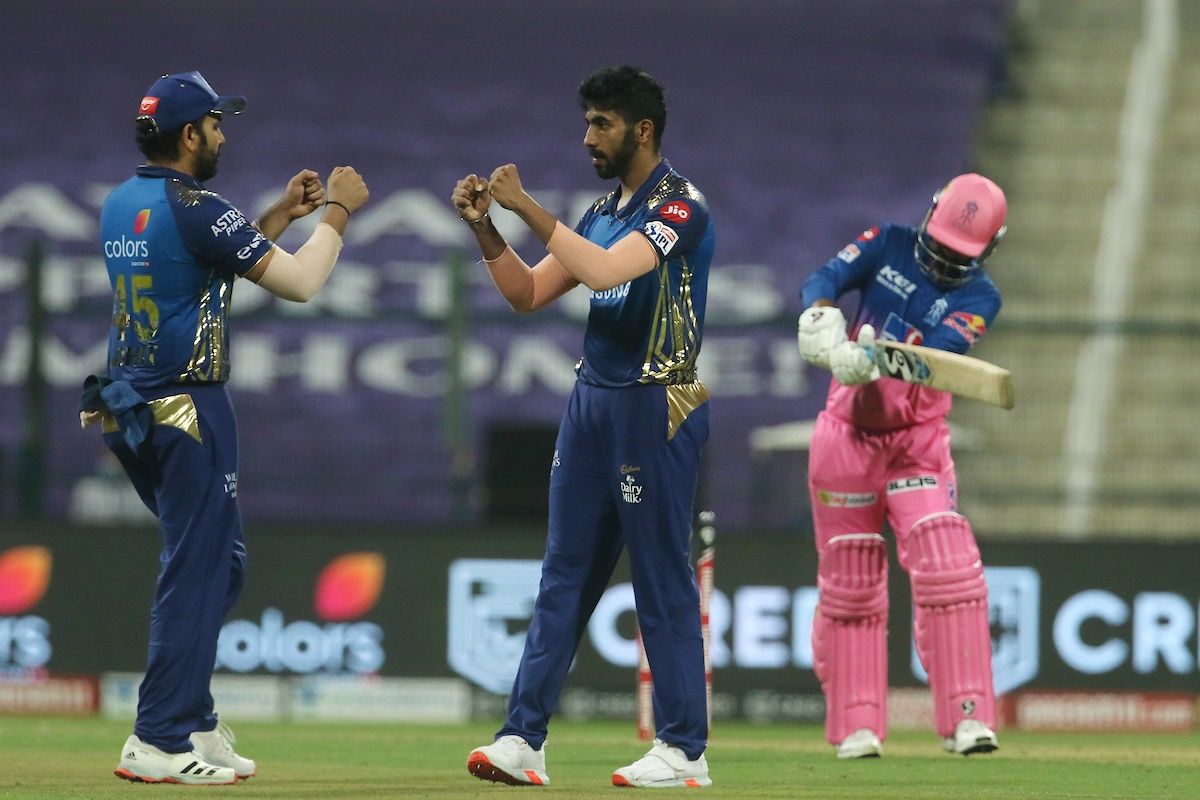 IPL 2020 Points Table Latest: Reigning champions Mumbai Indians produced yet another all-round show while riding on match-winning performances from pacer Jasprit Bumrah and top-order batsman Suryakumar Yadav as they thrash Rajasthan Royals by 57 runs in match no. 20 of IPL at the Sheikh Zayed Stadium on Tuesday. Suryakumar played a top-quality knock of unbeaten 79 off just 47 balls that powered Mumbai to a mammoth total of 193/4 in 20 overs. Also Read – Virat Kohli-led Team India to Play Day-Night Test vs Australia at Adelaide From December 17 | Report

Bumrah’s match-winning figures of 4/20 were also his best ever in the history of the T20 league. Apart from him, James Pattinson — 2/19 — and Trent Boult — 2/26 — scalped couple of wickets each to restrict Royals to a sub-par total of 136 all out in 18.1 overs. MI, after winning the toss and batting first, had scored 193 for four wickets in 20 overs. The win also helped Mumbai reclaim the top-spot on the IPL 2020 points table with eight points from six matches while Rajasthan slipped to the seventh place with four from five games. Also Read – IPL Match Today Report: Jasprit Bumrah, Suryakumar Yadav Fire Mumbai Indians to Third Straight Win, Beat Rajasthan Royals by 57 Runs

Chasing a stiff target of 194, Royals were down and out at 12/3 before Jos Buttler gave them a glimmer of hope with a 44-ball 70. However, the Englishman did not get support from the other batsmen and the Royals ended up well short at 136 in 18.1 overs for a 57-run loss, their third in a row. The three changes that they made also did not work for them. Also Read – IPL 2020 MATCH HIGHLIGHTS Mumbai Indians vs Rajasthan Royals Match 20: Bumrah Shines, Mumbai Thrash Rajasthan by 57 Runs

Mumbai’s pace trio was exceptional once again with Bumrah being the pick of them, returning with figures of four for 20, the best of the tournament so far. Boult struck twice in the powerplay while Pattinson removed Buttler in the 14th over. With another resounding win, Mumbai look the team to beat alongside Delhi Capitals. It is still early days in the tournament but it seems they have already figured out their best eleven on the park.

Mumbai Indians skipper Rohit Sharma has made a big jump and now occupy the fourth spot in IPL 2020 Orange Cap list – 211 runs – in six matches. He scored 35 against Royals and provided Mumbai a flying start in match 20 of Dream11 IPL. Kings XI Punjab captain KL Rahul manages to hold on to the number one and keep the Orange Cap, with 302 runs under his belt. CSK opener and ace Protea batsman -Faf du Plessis occupy the second slot with 282 runs in five matches. Rahul’s compatriot and opening partner Mayank Agarwal is at the third position with 282 runs. Rahul and Mayank are the only players to have scored centuries in this year’s edition of the IPL so far.

Delhi Capitals ace pacer Kagiso Rabada holds on to his Purple Cap – most wickets in the tournament, as his 4/24 helped Delhi demolish Bangalore on Monday. He is followed by Mumbai Indians pace trio – Jasprit Bumrah, Trent Boult, and James Pattinson. Bumrah with his outstanding figures of 4/20 versus Rajasthan has taken the second position, while Boult (10 wickets) and Pattinson (9 wickets) are at the third and fourth spot respectively. RCB spinner Yuzvendra Chahal, who gone wicketless vs Delhi Capitals, has eight wickets against his name – he is at the fifth slot.