Mika, my children’s 16-year-old half-sister, is posting old photos on Instagram, group shots with her best friends standing in close proximity to each other, with the simple caption Take me back. Even 16-year-olds are feeling nostalgic.

Madeline, my 4-year-old granddaughter, has invented imaginary friends. Madeline’s mother—my daughter Anna—has to call Salia’s mother to ask if Salia can come over. Madeline and Salia are not allowed to hug on their playdates. No, maybe that’s wrong. Maybe she and Salia are allowed to hug in the space Madeline has invented for herself in order to have playmates besides her younger brother. I have never been over when Salia was there, but I admire both Anna and Madeline’s ingenuity for stepping up to this game. In this unprecedented time, which is both fractious and fragile, we are all doing what we can to hold onto relationships and stave off loneliness.

My family has always been imaginative. My sister Nora wrote a play called Imaginary Friends. It wasn’t really about imaginary friends, though. It was about a feud between Lillian Hellman and Mary McCarthy. Nora imagined the fight escalating and ending up in court.

When I was a kid, my sister Delia invented imaginary friends for me, in a hilarious, terrifying, big-sister way. The little blue man and the little green man lived under my bed, and Delia would tell me stories about them when it was time for me to sleep. I have a distinct image of the little blue man (who was very little and blue), wearing blue shorts with red suspenders and a white T-shirt, popping out from under my wooden bed frame when I was 5 years old and scaring me. I am quite certain they do not live under my bed now. But I would trade the fear and anger I feel about the pandemic, about our politics, about the people I encounter without masks on the street, for any sight of the little blue man. Take me back.

Even though we all live in Los Angeles, my daughters and their respective spouses and children have only seen each other once in seven months. The parents all work, have contact with others and are not able to create a safe “bubble” around them. So, my husband Alan and I see them one pod at a time, with enormous amounts of space between us. They slide in through the garden gate, their kids taking seats on the swings. Occasionally we stand on the sidewalk and watch Roman, Madeline’s 2-year-old brother, speed down the street on a scooter. He has become remarkably coordinated. We missed the beginning of this developmental stage, but are happy to see the result.

The visits are fraught in their own way, sad, because we can’t hug them, push them on the swings or whisper something in one of their ears. But we have become used to them.

My son Ethan, who also lives in L.A., bought a dinosaur costume on Amazon and terrified my other daughter Maia’s 4-year-old son, Zachary, and 2-year-old daughter, Chloe, by popping up outside their window and dancing across the lawn while making dinosaur noises. I know this because there’s a video. At one point, Zachary hid under the table and screamed, “Mom, you told me dinosaurs were extinct!” When Ethan reprieved this performance at the more jaded cousins’ house (in fairness, a lesson learned, he did not appear unannounced outside anyone’s window), Madeline and Roman started laughing hysterically. I know this, too, because there’s a video, and their laughter as well as their parents’ is infectious. A month earlier, we celebrated Madeline’s birthday on Zoom. Aunt Maia bought an Elsa costume and showed up as a surprise guest. Dress-up, apparently, is trending in my family. 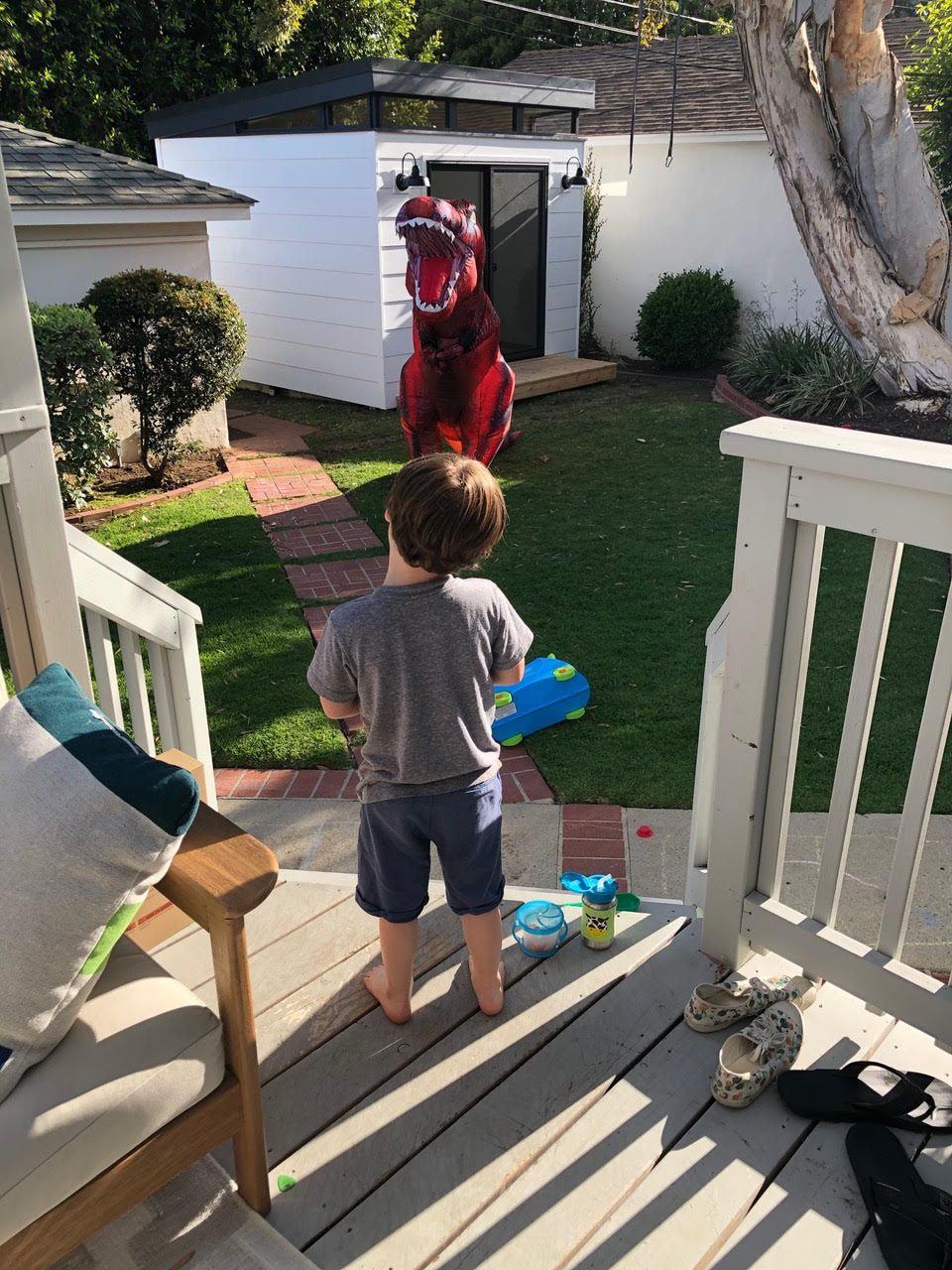 Ephron’s son, dressed as a dinosaur, with her grandson

Recently Madeline took a walk with her father. She pointed to a tiny cactus and asked if it was a germ. Her father, Kevin, sent me the picture. I see her point. But she’s only 4, and she’s thinking about science, about viruses. She even asked her mom why the healthy people couldn’t give their blood to the sick people and make them better.

Just a while ago, we were hopeful that there might be an end in sight. School would start, the children would be allowed to interact again, it would begin to feel less scary, less breakable, less precarious. In that moment, Madeline had a social-distancing play date with her two best friends at a public park. It was the first time they had seen each other in four months. All of them wore masks. It is no longer clear when they might be able to safely do that again. They are attending school remotely.

Now that the U.S. is well into a third spike in infections, and other countries are also experiencing a surge, we no longer know what to expect or how we are supposed to navigate it. Every day brings a new challenge, a need for further ingenuity to keep our family feeling connected and optimistic. But costumes and games, videos and imaginary friends are no replacement for the easy intimacy we have lost.

I find myself looking at a photograph of Madeline and two of her friends taken at daycare a year ago. In it, they’re playing dress-up in front of a pretend cardboard house. One of them, as if she was prescient, is wearing a bandana as a mask. They are standing right next to each other, close and smiling. I’m thinking about posting it on Instagram with the simple caption, Take me back.