Even fewer people expected the Democratic candidate, Jaime Harrison, to become a sensation who shattered the record for the highest quarterly fundraising total for a Senate candidate in U.S. history—$57 million between July and September.

But those who know Harrison—a 44-year-old Black man born to a teenage mother and raised by his grandparents in a mobile home— are less surprised the race in deep-red South Carolina is close. (It was recently re-categorized as a “toss up” by The Cook Political Report.)

One reason is that Harrison was a top aide to House Majority Whip Jim Clyburn, one of the most powerful Democratic members of Congress. Harrison’s job as floor director was helping the South Carolina Democratic icon count and whip votes. The second is Harrison’s former position as chairman of South Carolina’s Democratic Party, where his job was understanding every aspect of state politics.

There’s a third reason: his opponent. Once a moderate Republican who was part of the bipartisan group that devised a 2013 immigration reform bill, Graham has transformed from a Donald Trump critic to one of the President’s closest allies. In recent weeks, the Senate Judiciary Committee chair steered the confirmation of Justice Amy Coney Barrett, reversing his position on whether Supreme Court Justices should be voted on in an election year. In the Trump era, he’s become a national villain for Democrats, which has driven attention—and money—to his opponent.

Harrison has capitalized by focusing on local issues. “The urgency to get Supreme Court justices through, or tea time with the President, or going on Fox News—all those things are much higher on the priority level for Lindsey Graham than addressing the issues people are dealing with,” Harrison tells TIME in a phone interview. (The Graham campaign did not immediately respond to a request for comment.)

Harrison is hardly the first candidate to raise extraordinary amounts of money against a red-state incumbent whom Democrats detest. Liberals have gladly opened their pocketbooks for apparent long-shot challengers of Senators Ted Cruz in Texas (Beto O’Rourke) and Mitch McConnell in Kentucky (Amy McGrath). The difference between Harrison and other less-successful Democratic hopefuls may come down to his being qualified to determine how to make the best use of that money.

Harrison’s campaign is “completely organized, it’s extremely efficient,” says Amanda Loveday, chief of staff of Unite the Country, a pro-Biden super PAC, and former executive director for the South Carolina Democratic Party while Harrison was party chair. “It had to be flawless, and it has been. It’s purely based on energizing the base and reminding South Carolinians, no matter their political stature, what Lindsey has not done for them.”

Harrison has become a ubiquitous presence in the state, with ads blanketing the airwaves. He’s presented himself as a unifier and pledged to grow the middle class and protect health care. According to his campaign, Harrison’s paid staff grew from two when they kicked off in the spring of 2019 to 52 now. His campaign also has a service initiative for community needs, like helping families get personal and school supplies. “Too many people lack opportunity,” Harrison says, citing rural hospitals closing, a lack of broadband access and crumbling schools and bridges. 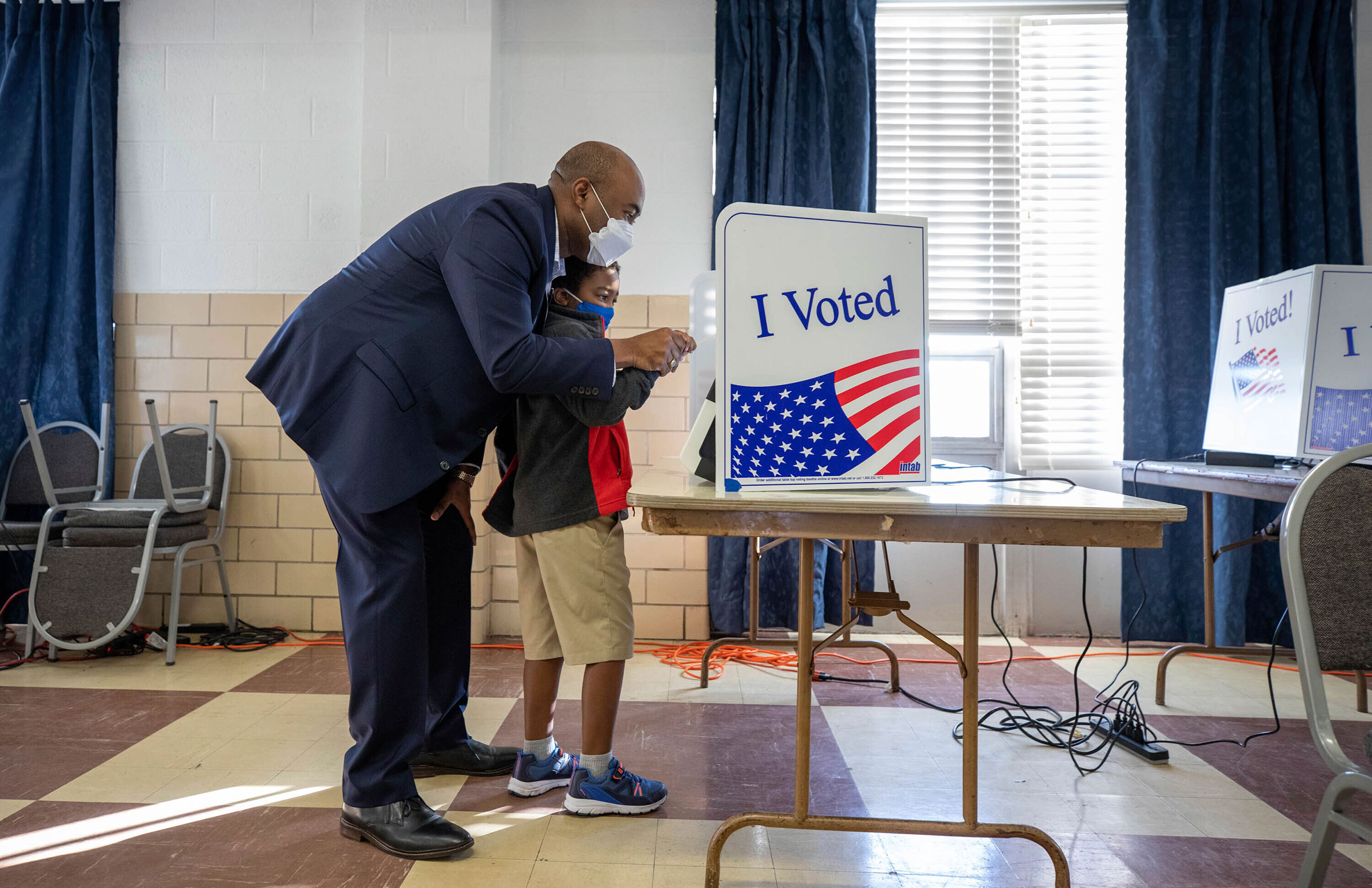 Senate candidate Jaime Harrison votes with his son, William, 6, at the Masonic Temple in Columbia, S.C. on Oct. 19, 2020.

As a child, Harrison was one of them. He grew up eating cereal with water because his family couldn’t afford milk. In one biographical ad, he says a con artist stole his grandparents’ life savings, which inspired him to become a lawyer. He went on to earn degrees from Yale and Georgetown Law. He worked for Clyburn for five years, starting in law school, before doing some lobbying and eventually becoming the South Carolina Party Chair.

Given Graham’s political straits, Harrison also happens to be in the right place at the right time. “It takes that sort of alignment for somebody with a ‘D’ after their name to have a shot at the top of the ticket in South Carolina, and I think he does have a shot,” says Laurin Manning Gandy, a Democratic strategist in South Carolina.

Democrats in the state believe Harrison can win if enough Trump supporters vote for him or skip the Senate race, or if the third-party candidate in the race—who endorsed Graham —siphons away enough support from the Republican. He also has to turn out Black voters. More than 1 million non-white voters are registered in the state. “We expect a record high in terms of the vote from minority communities in South Carolina,” Harrison says.

Win or lose, Harrison has created openings for other Democrats in the state by drawing national money to the state that’s trickling down to other candidates. Like O’Rourke in Texas, who narrowly lost a Senate race against Cruz in 2018, Harrison could buoy down ballot candidates. “The investment that’s being made at the county level, the state level, and then both caucus levels is going to transform the makeup of the Democratic party for at least 10 years,” says South Carolina state Rep. JA Moore.

Harrison’s campaign did not provide a total amount of money it has transferred to the state Democratic Party or other Democratic entities in the state, but a scroll through party receipts shows the Harrison campaign has passed along millions. If Democrats can flip five state Senate seats, for example, they could take outright control of the chamber, which has even higher stakes this year due to redistricting. According to Harrison’s campaign, the South Carolina Democratic Party’s “coordinated campaign” has 104 staffers across 46 counties, who have made 2.3 million calls and sent 4.2 million texts on behalf of Democrats in the state.

“All of the things that a normal campaign needs to have to win, we just never had those resources and we had to rely on a lot of volunteers. But now because of Jaime’s campaign efforts, it’s a new day in terms of Democratic infrastructure,” says Anton Gunn, a former Obama political director in a South Carolina primary. “Because he was state party chair, he knows the infrastructure needs of the state.”

On the Republican side, there’s some agitation over the money Democrats have raised, but confidence that voters will back Graham again. “Lindsey’s always had some measure of difficulty with the Republican base,” says former Republican Governor and U.S. Rep. Mark Sanford. “I think when it comes down to actually pulling the lever between Lindsey, as much as they may not like him, and a Democrat, they’re going to go Lindsey.”

Asked if he thought it was fair to say that that the money would help other Democrats down-ballot, Sanford responded, “totally.”

Other Republicans are similarly confident in Graham’s chances. “I’m not worried. Lindsey’s going to win. Senator Graham’s going to pull it out, he’ll win comfortably,” says Chad Connelly, former South Carolina GOP chairman. “The only reason the race was ever tight was money.”

Harrison has used that skepticism as fuel. “For me, that’s inspiration,” he says. “Tell me I can’t do something, and you will see a very determined person that shows you that you’re wrong.”

Write to Lissandra Villa at lissandra.villa@time.com.