North Korea watchers are warning that Kim Jong Un could ratchet up tensions with the U.S. as President-elect Joe Biden prepares to take office in January. Biden will have daunting domestic challenges—the coronavirus pandemic and the recession chief among them—but he could also find his Administration quickly drawn into a nuclear standoff with North Korea.

“It is possible Pyongyang will conduct a nuclear or long-range missile test prior to the inauguration or shortly thereafter as a way of laying down a marker with the new president and increasing its negotiating leverage with Washington,” Evans Revere, a member of the Council on Foreign Relations and former State Department official with extensive experience in negotiations with North Korea, tells TIME.

In many ways, North Korea is more isolated, more desperate and more dangerous than ever. The pressures of crushing international sanctions, natural disasters and the coronavirus pandemic have worsened living conditions for regular North Koreans. And although President Donald Trump boasted about his friendly relationship with North Korea’s brutal leader and claimed that he had averted a war, experts say his strategy of face-to-face summits led to no real progress toward disarmament.

“The Biden team will be mindful of the failings of Trump’s approach, which has amounted to turning a blind eye to North Korea’s steady accumulation of nuclear weapons and testing of medium-range missiles,” Revere says.

How North Korea got more dangerous 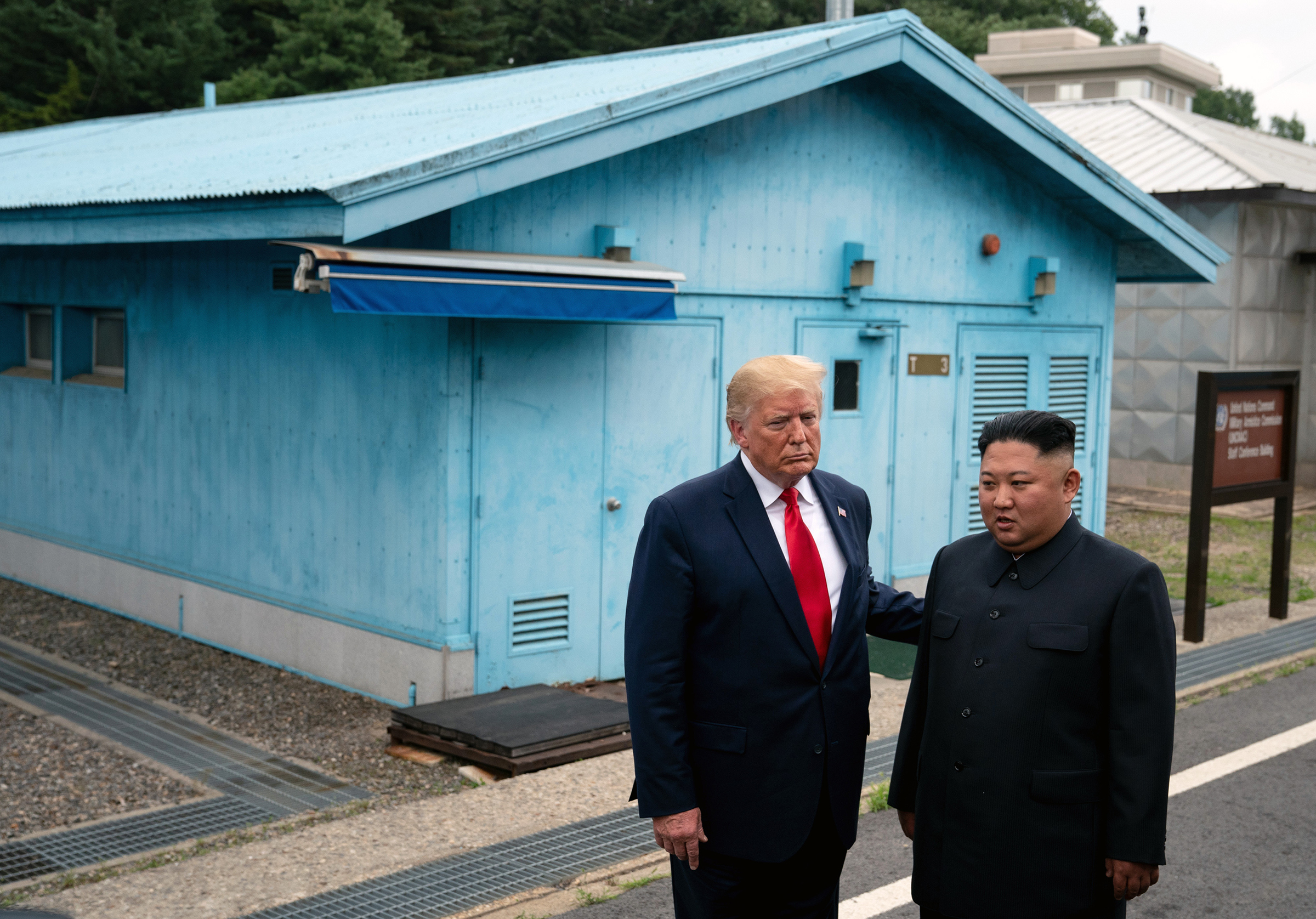 President Donald Trump and North Korean leader Kim Jong-un stand on the South Korean side of the Demilitarized Zone between on June 30, 2019

Pyongyang has a track record of carrying out provocations early in the terms of U.S. presidents, and tensions with North Korea began to spike soon after Trump took office in 2017.

Read more: How a North Korean Nuclear-Armed Submarine Could Make It Even Harder to Strike a Deal

The tenor of the two leaders’ exchanges had changed significantly by spring of 2018, when Trump and Kim met for the first-ever summit between the leaders of the U.S. and North Korea. After that exchange, Trump and Kim vowed “to establish new U.S.–[North Korea] relations in accordance with the desire of the peoples of the two countries for peace and prosperity.”

With Trump now on his way out of office, those lofty claims have come to nothing, as North Korea has continued to develop advanced weaponry. In October 2019, North Korea fired a submarine-launched ballistic missile that American officials said had a range of more than 1,200 miles—a capability that would make North Korea’s nuclear threat even harder to contain. At a military parade last month, the North’s military displayed what experts said is a new, bigger intercontinental ballistic missile.

How North Korea got more desperate 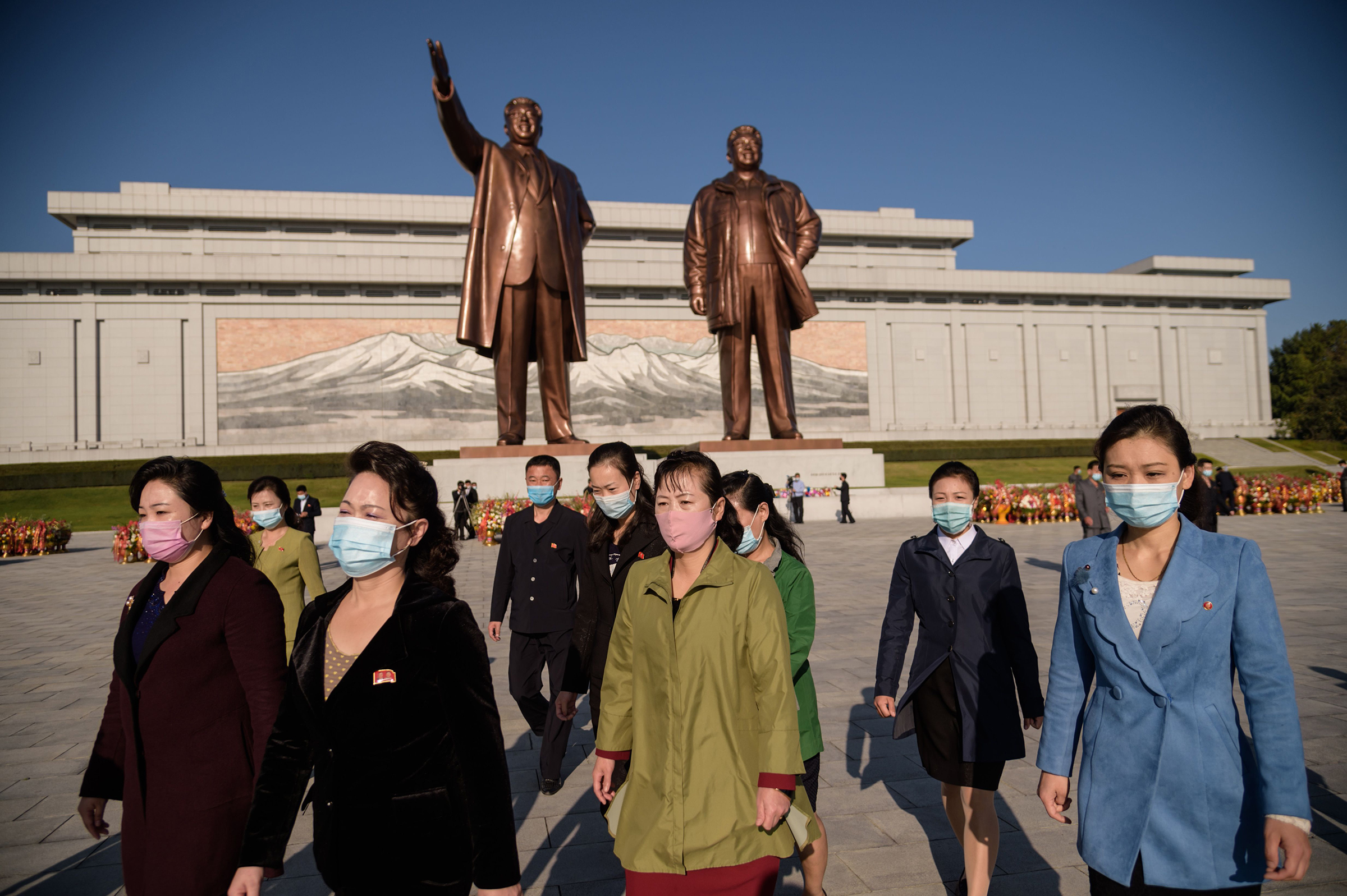 North Korea has not reported any cases of coronavirus, though experts doubt that the country is free of COVID-19. In an effort to defend its fragile health system it closed its border with China—the only active overland frontier and the conduit for much of the country’s international trade.

As a result, vital trade has plummeted. United Nations Security Council data shows imports of oil from China fell to just 142 tons in August, the most recent month for which data are available, compared to 2,200 tons in the same month last year.

Read more: North Korea Says It Has No Coronavirus – Despite Mounting Clues to the Contrary

Doh Hee-youn, a human rights worker and director of Happy Unification, a civic group that educates young South Koreans about North Korea, says, “All movement toward the border has been cut off by the military, which has made the unusual move of deploying more soldiers around the border.”

“Daily life has gotten extremely difficult there, as even the informal markets are not operating,” he adds.

How Biden is likely to react to North Korea 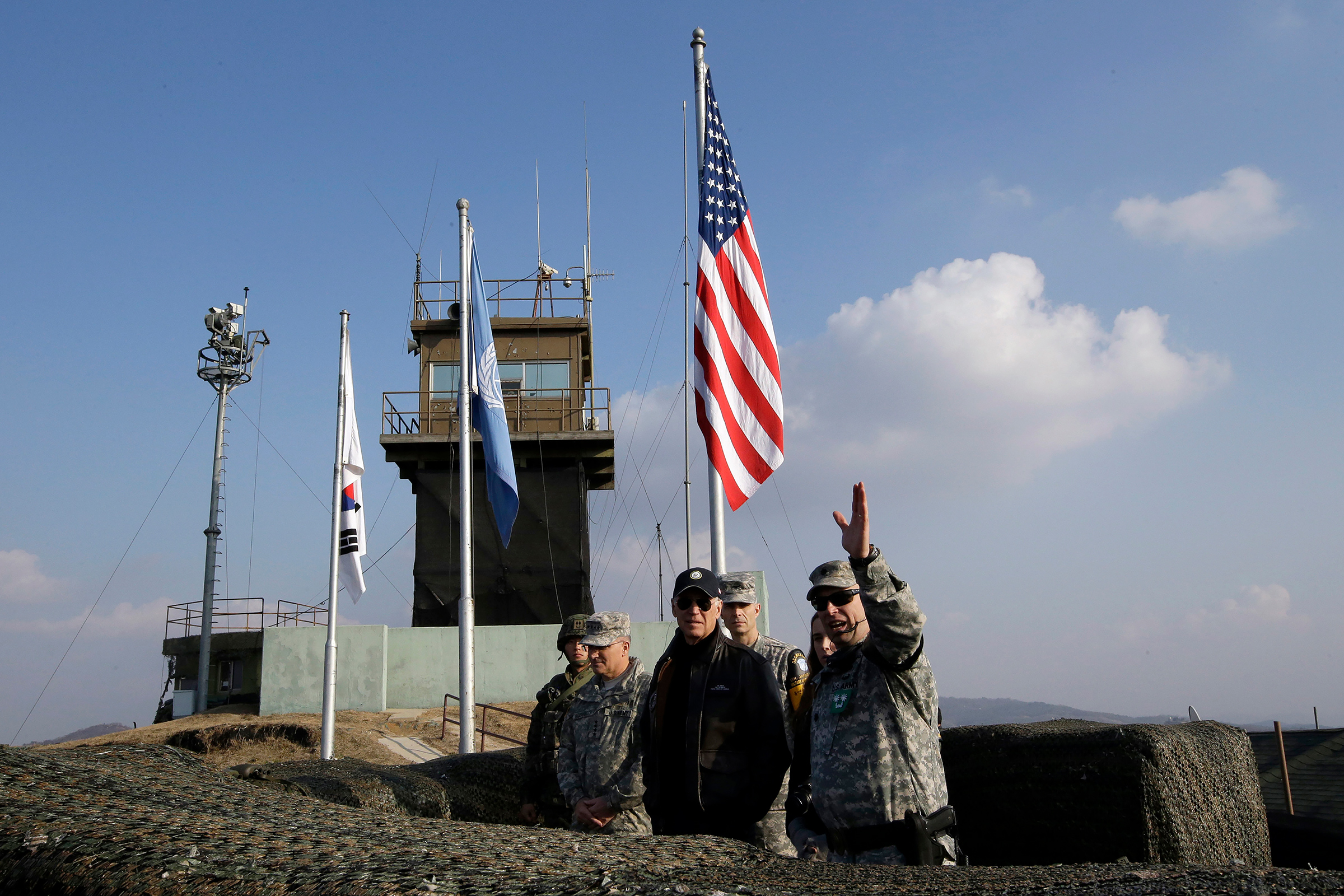 On Dec. 7, 2013, then U.S. Vice President Joe Biden, center, visits Observation Post Ouellette inside the Demilitarized Zone, which has separated the two Koreas since the Korean War

Analysts say that once Biden takes office in January, he is likely to take a far more conventional approach to relations with North Korea than his predecessor—who famously eschewed formal diplomatic channels and instead put his faith in his personal relationship with Kim.

“I strongly suspect the Biden Administration’s approach on North Korea will rely on pressure and sanctions to raise the cost to North Korea of its nuclear and missile programs,” Revere says.

Having served as Vice President from 2008 to 2016 under Barack Obama, Biden comes into office familiar with the North Korea question. The Obama Administration took a starkly different approach to Pyongyang than the outgoing Trump administration did, refraining from any high-level dialogue as part of a policy dubbed “strategic patience.”

The core of the policy was waiting for international sanctions to cut off North Korea’s sources of outside revenue, eventually forcing Pyongyang to take verifiable steps toward denuclearization as a way of winning sanctions relief and gaining access to the international trade system.

The policy achieved none of its objectives, however, as North Korea expanded its nuclear capability throughout Obama’s term. South Korea’s Foreign Minister Kang Kyung-wha has said she expects a Biden Administration to formulate a new policy.

If North Korea resorts to provocation, Biden is likely to shut down any chance of talks, says Clint Work, a security fellow at the Stimson Center in Washington D.C. “Biden is not inclined to give Pyongyang the benefit of the doubt, nor are those who advise him,” he says. 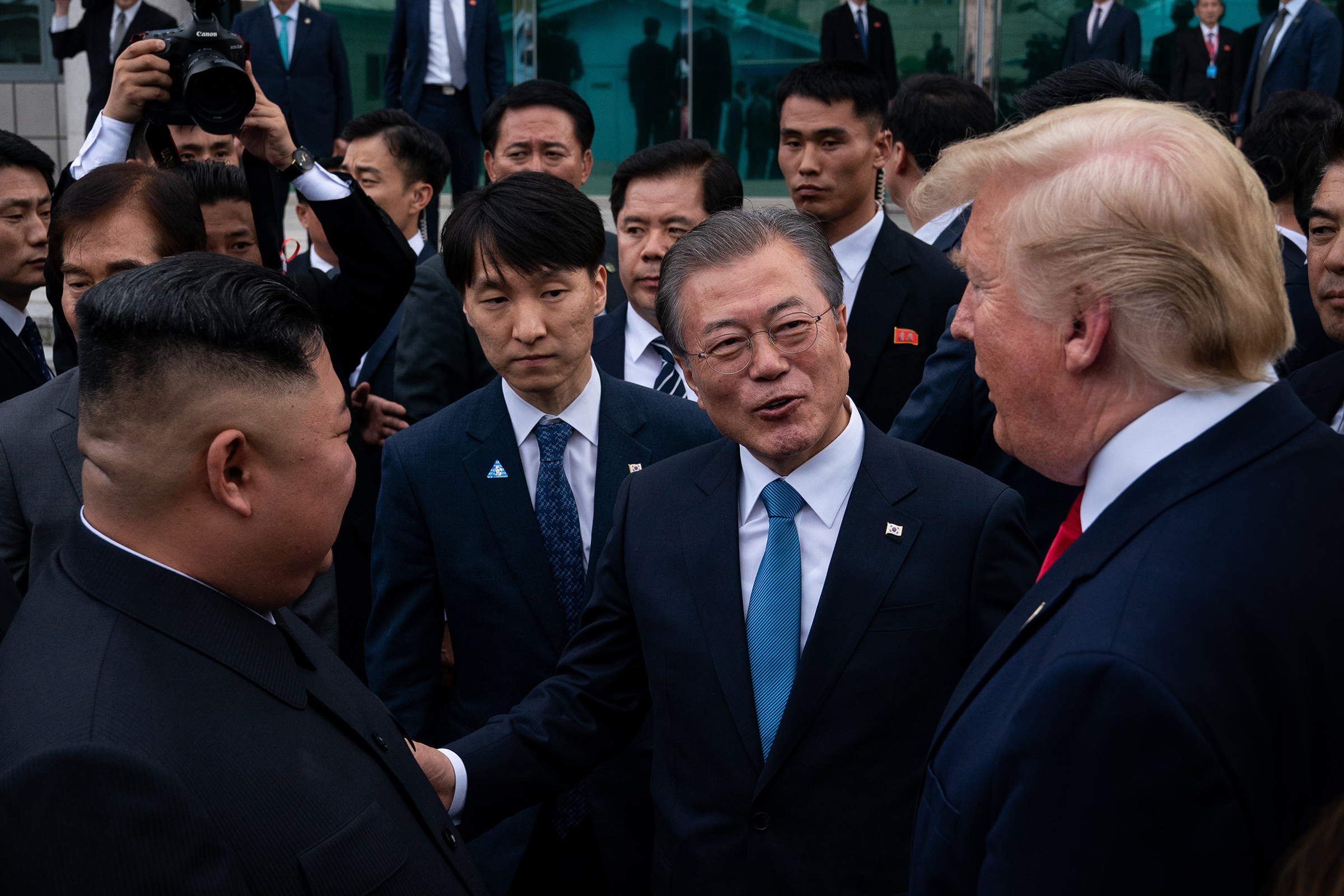 President Donald Trump, President Moon Jae-in, and Kim Jong Un speak outside the Freedom House on the South Korean side of the truce village of Panmunjom, June 30, 2019

The challenge presented by North Korea will also motivate Biden to improve Washington’s relations with allies in the region—particularly South Korea. Trump frequently depicted South Korea and other allies as taking advantage of the U.S. as a defense partner. He even floated the possibility of withdrawing U.S. troops from South Korea, which has been divided from the North since the end of World War II.

“Biden’s diplomacy can start with a very deep consultation with our allies in Seoul, to get an understanding of the viewpoints there, to allow Seoul and Washington to find a common approach,” says Kathleen Stephens, president of the Korea Economic Institute and U.S. ambassador to South Korea from 2008 to 2011.

She adds that Biden will reassure Seoul “on the issue of U.S. commitment to defend South Korea, and try to do things that will forestall the incipient feelings that maybe they can’t depend on the U.S.”

In South Korea, the left-leaning administration of President Moon Jae-in has made rapprochement with North Korea a key policy objective, despite a current lack of momentum in inter-Korean relations. Officials in Moon’s administration have spoken of South Korea playing an active role in fostering dialogue between Washington and Pyongyang.

“Seoul will likely seek to persuade Washington to restart the suspended nuclear talks next year,” says Shin Kak-soo, a former diplomat who represented South Korea at the United Nations.

“Biden prefers bottom-up diplomacy, unlike President Trump, and that will make it difficult for both sides to enter into real nuclear negotiations, as no North Korean official except Kim Jong Un has the authority to discuss nuclear issues.”

The lingering problems in North Korea mean that even if Kim doesn’t provoke a crisis in the coming months, Biden’s grace period will be limited, according to Revere, the former State Department official: “As I have long said, the North Koreans won’t allow you to ignore them.”