Just before 5 a.m. Monday, three officers from Myanmar’s national police force showed up at Po Po’s home in Yangon. The officers, two of whom carried rifles, asked for her husband Min Thway Thit, a former leader of a prominent dissident student union. “They said they wanted to ask some questions,” says Po Po. “I asked whether they had a search warrant to enter his room, and they told me it wasn’t necessary.”

Myanmar’s military, known as the Tatmadaw, staged a coup against the democratically-elected government of Nobel Peace Prize laureate Aung San Suu Kyi on Monday. She and more than 40 government officials from her National League for Democracy were arrested and the military declared a yearlong state of emergency under the leadership of Commander-in-Chief Senior General Min Aung Hlaing.

The military did not stop at arresting politicians associated with the ruling government, however: Min Thway Thit is one of 16 members of civil society, including prominent dissident activists, writers, a musician, a filmmaker and two monks, who were also detained, according to a list compiled by U.S. government-funded Radio Free Asia.

Read more: How Myanmar’s Fragile Push for Democracy Collapsed in a Military Coup

Po Po says she doesn’t know where police took her husband, and she has not heard from him since police took him away. “They didn’t tell me anything about why [my husband] was arrested,” she says. “They told me they had some questions to ask him, and they said that I should prepare some clothes for him and other personal items.”

For many activists and journalists, these arrests were a sign that the coup went beyond unseating Aung San Suu Kyi and her party—it is an attempt to crush the fragile political liberalization that the military junta itself had opened the door to following its oppressive rule from 1962 to 2011. 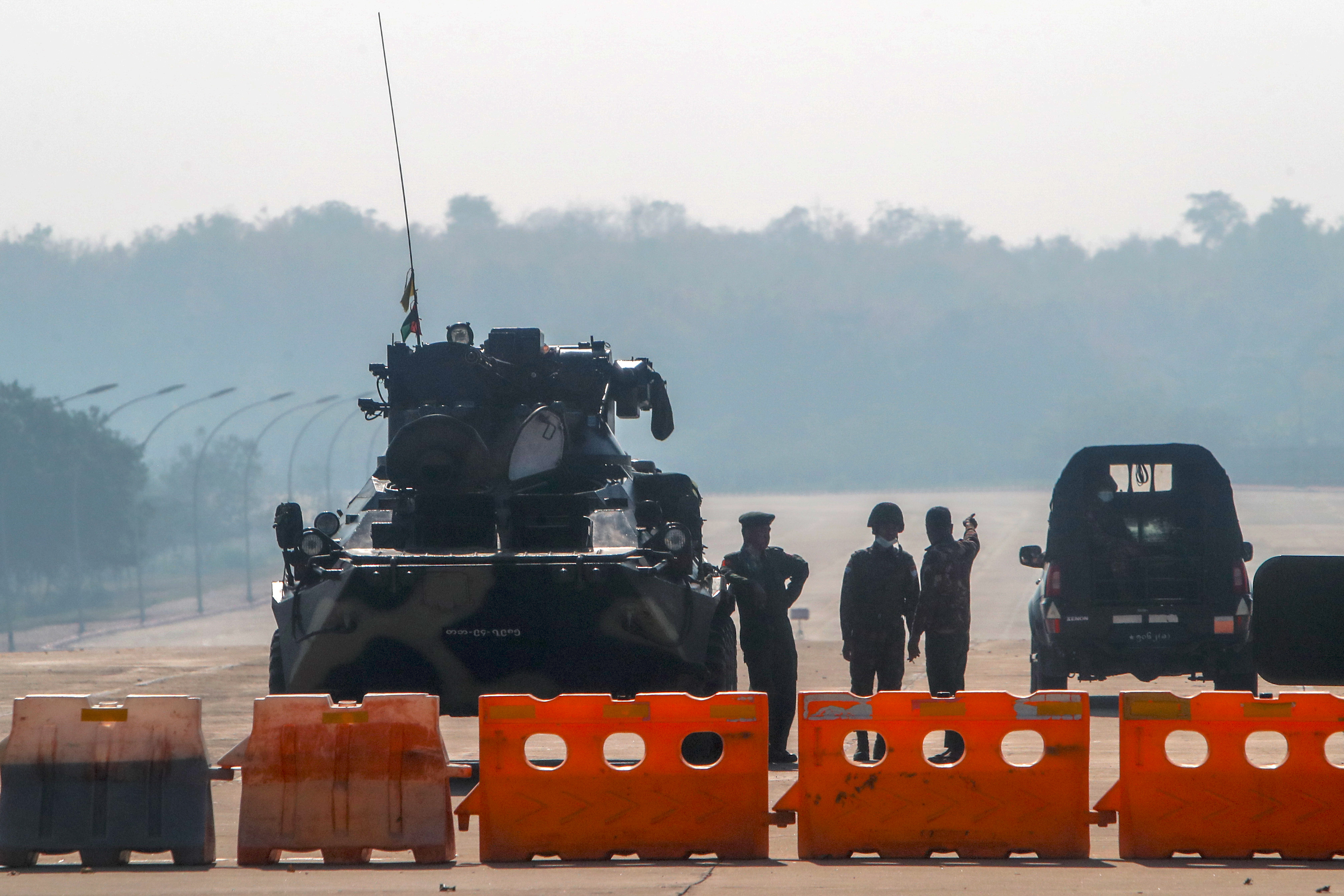 Myanmar’s military stand guard at a checkpoint manned with an armored vehicle in a road leading to the parliament building Tuesday, Feb. 2, 2021, in Naypyitaw, Myanmar.

After Aung San Suu Kyi was released from 15 years of house arrest in 2010, young activists pushed to expand freedom of expression and fought to improve civil rights and the rule of law, hoping to move the country on from the decades of censorship and arbitrary detention enforced by the military. Now, they fear what comes next.

Thet Swe Win, an activist who works to promote peace and interfaith harmony, says that he and most fellow activists in Yangon have left their homes and gone into hiding. “This is a really threatening situation for human rights defenders and all political activists. We will be the first targets,” he says.

Others have already ended their work, at least temporarily. “I resigned from my position, since the work I am involved in is sensitive from the perspective of the military,” says a civil society worker advocating on human rights issues in Myitkyina, the capital of Kachin State. He spoke to TIME on the condition of anonymity, fearing arrest. “We are like birds in a cage; anyone can be arrested….anything can happen under this military regime.”

The military’s seizure of power came just hours before parliament was set to convene for the first time since national elections in November. Aung San Suu Kyi’s NLD party won by a wide margin, but the military has repeatedly alleged voter irregularities and contested the results—even though international observers have said the election was without major irregularities.

Bo Kyi, Joint Secretary of the Assistance Association for Political Prisoners, a rights organization based in Yangon and Thailand that was founded by former political prisoners, says that it is the “military’s nature” to restrict civil society and the media. “Later [the military] will target civil society and impose more restrictions. We cannot expect much from them regarding respecting human rights and the rule of law.”

Media workers are also concerned. “I am really worried about freedom of expression, because it will be the first thing the military will attack,” says a Yangon-based filmmaker who spoke to TIME on the condition of anonymity because she feared arrest. Some of her friends, she says, have moved to undisclosed locations for their safety, while she had lost contact with others.

Hours after the coup, a photojournalist was beaten up in downtown Yangon while he was filming a pro-military celebration.

A freelance journalist who works under the pseudonym Cape Diamond tells TIME from the capital Nay Pyi Taw on Tuesday that he was concerned for the safety of journalists working in the field. “It will be a big loss for all of us if journalists don’t continue their reporting due to fear of action against them,” he said. “I am afraid journalists might censor themselves.” 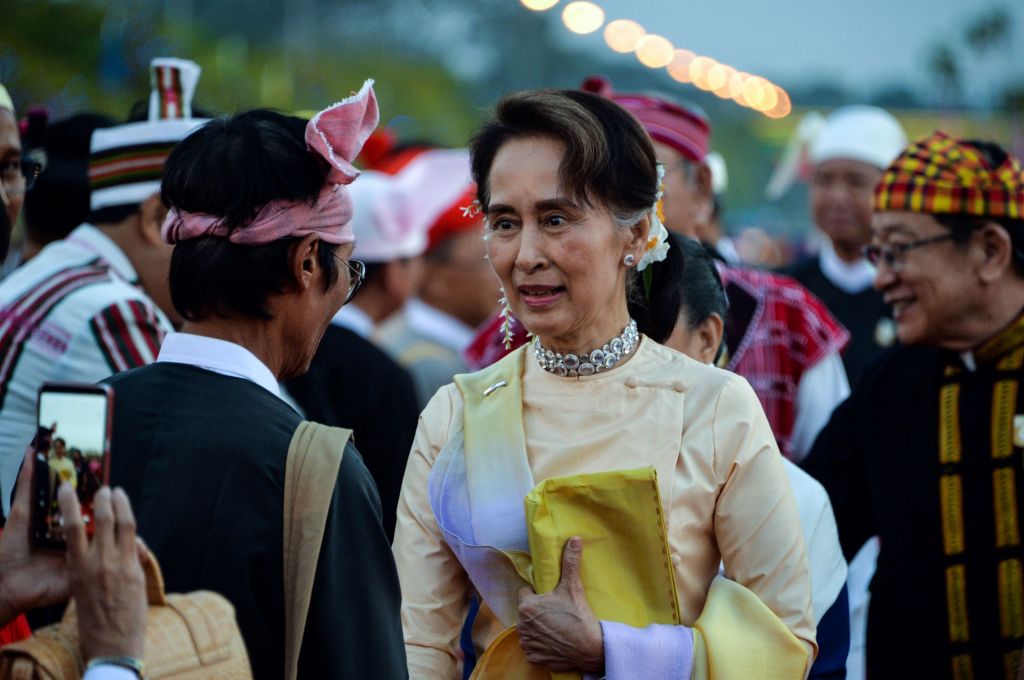 Aung San Suu Kyi became a global human rights icon following pro-democracy uprisings in 1988, but her reputation fell internationally when she defended military atrocities committed against the mostly-Muslim Rohingya population of Rakhine State—which United Nations investigators say were carried out with “genocidal intent.” Although the majority of people in Myanmar are fiercely loyal to her—her party won 80% of the popular vote in November, with many seeing her as the antidote to military rule—some activists have protested the erosion of civil liberties and human rights during her term.

As of December, there were more than 600 political prisoners across the country, including 42 serving prison sentences, 196 awaiting trial in jail, and 363 awaiting trial outside. Although the NLD had vowed in 2016 to formally define the term political prisoner and refrain from arresting anyone for political activities, it did not deliver on these promises, and itself filed more than 250 lawsuits against those who criticized it.

The government also failed to hold the military accountable for systematic violence against civilians from ethnic minorities, including the Rohingya. Since June 2019, the government also imposed the world’s longest internet restrictions over areas of Rakhine and Chin States.

“We have already been facing ongoing human rights violations, and now we will continue to face them,” says Thinzar Shunlei Yi, one of the country’s leading youth activists and the host of a TV youth dialogue series. “Human rights defenders were always targeted and activists arrested. The group who arrests them will change, but the arrested people will remain the same.”

Thinzar Shunlei Yi hopes the coup would draw attention to the flawed military-drafted 2008 constitution that enshrines the military’s dominant role in Myanmar’s politics. The constitution gives unelected members of the military 25% of seats in national and state legislatures, making amendments impossible without military support. It also mandates that the Commander-in-Chief appoints key ministerial positions, and allows the military to take over in times of emergency. Although the NLD government had made constitutional reform one of its key campaign promises in 2015, it was unsuccessful at pushing through meaningful results.

As of Tuesday, streets remained quiet, while activists told TIME they were assessing the situation carefully. On Tuesday afternoon, a group of youth activists known as the Yangon Youth Network released a statement announcing the launch of a civil disobedience campaign in Yangon and Mandalay, Myanmar’s two largest cities. Youth activist Thinzar Shunlei Yi tells TIME it will be a “non-cooperation and civil disobedience campaign launched by youth in Mandalay and Yangon to attack the military junta nonviolently.” It remains to be seen, however, whether the kind of large scale protests seen in 1988 and 2007 will follow.

Many activists interviewed by TIME issued a plea for solidarity from the international community, and swift actions to condemn the coup and punish the perpetrators.

“We need support, including emotional support, because the situation is really devastating. For us, the younger generation, it is the first time [to experience a coup]…It is shocking,” says the Yangon-based filmmaker.

Ye Wai Phyo Aung, founder and research manager with the freedom of expression group Athan, said he is determined to push forward as an activist. “I am still hoping for democracy, freedom and human rights,” he said. “I will not give up in the struggle. We must believe in ourselves that we can overcome this hardship.”