Despite months of warnings, threats and fears over possible civil unrest, Election Day 2020 came and went in the United States without major incident. It’s a welcome development for an anxiety-ridden nation that boarded-up its main streets, readied emergency plans and mobilized National Guard forces in anticipation of confronting more of the chaos that has come to define this extraordinary year.

Concerns over extremist violence and voter intimidation at polls failed to materialize to the delight of voters, voting rights groups and local governments, which attributed the peace to preparations, plans and drills. Similarly, national security experts breathed a collective sigh of relief that no widespread foreign meddling efforts in the cyber realm have yet emerged.

Now, as votes are tabulated in several states and Americans await to see who their next president will be, comes the next challenge: Trusting the government officials tallying the results. Tensions are expected to heighten in the days ahead amid a protracted vote-counting process without a clear winner, security analysts and voting rights experts say.

“This, in some respects, may be the calm before the storm,” said Kristen Clarke, president and executive director of the Lawyers’ Committee for Civil Rights Under Law. “We know that a big part of this election will be proper handling and counting of absentee ballots.” 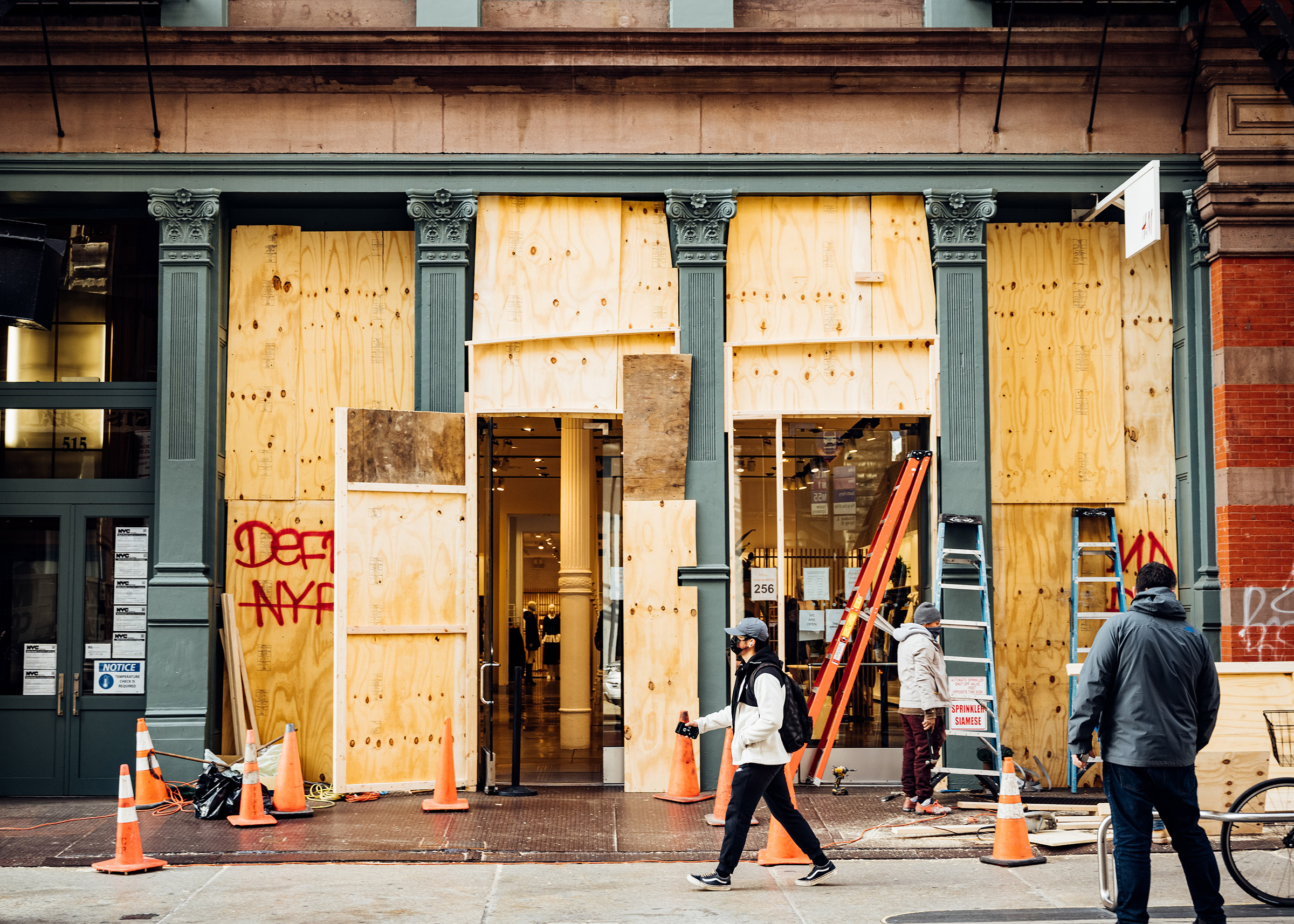 Businesses board up their windows in New York City on Nov. 3, 2020.

The absence of a declared winner creates an information vacuum that is already being filled by disinformation. And while the 2016 cycle showed how foreign operatives were exploiting social media to influence the U.S. election, the lesson of 2020 is already clear and even more worrisome: the greatest threat to a credible vote is homegrown. As election officials worked around the country to tally Americans’ votes, President Donald Trump, his eldest sons, and his supporters took social media to falsely declare voter fraud with legitimate mail-in ballots. “We are up BIG, but they are trying to STEAL the Election. We will never let them do it. Votes cannot be cast after the Polls are closed!” Trump said on Twitter not long after the last polls closed.

On Wednesday morning, Trump continued to make baseless allegations about voter fraud in key states in false and misleading social media posts. At least four tweets prompted Twitter to append a note labeling them as “disputed” or “misleading,” while Facebook clarified that final results may differ from initial tallies.

Bill Stepien, Trump’s re-election campaign manager, announced plans to file a lawsuit to stop counting votes in Michigan until the campaign obtained “meaningful access” watch the ballots come in. Trump supporters seem to be taking their cue. On Wednesday, video footage captured at the Detroit convention center where Michigan officials tallied votes showed a throng of protesters chanting “stop the count,” and “stop the vote.”

Trump’s false claims and calls for voting to stop are part of the latest attempt by the President to capitalize on the fear and uncertainty surrounding a national election held in the midst of the COVID-19 pandemic. For several months, Trump has falsely claimed that mail-in ballots “lead to massive corruption and fraud,” that foreign powers will “forge ballots” and that the “only way we’re going to lose this election is if the election is rigged.”

The message has resonated with right-wing extremist and self-styled militia groups that have continued to spread conspiracy theories about how Democrats planned to rig the election, said Mary McCord, legal director at the Institute for Constitutional Advocacy and Protection at Georgetown University. While the threats of violence at polling places did not materialize, these groups still could create chaos, particularly if mass protests or demonstrations begin taking place in American towns and cities.

“We were very pleased to see that unlawful militia groups did not attempt to patrol the polls or otherwise intimidate voters,” McCord said. “We recognize that many of them are spreading false information about the election and the ballot-counting process and we urge law enforcement to remain vigilant and take prompt action against any unlawful paramilitary activity in the coming days.”

A senior official with the Cyber Infrastructure Security Agency, or CISA, told reporters that Election Day was “just another Tuesday on the internet.” But disinformation experts have warned for months that claims of fraud are often amplified by foreign nations seeking to meddle in the election.

While National Guard units weren’t called upon to deal with civil unrest on Tuesday, thousands of troops remain prepared to protect their cities and counties. Armored vehicles and camouflaged soldiers were spotted patrolling the streets of Philadelphia and Chicago.

It was part of Chicago Mayor Lori Lightfoot’s 10-day “preparedness plan,” which also included extra police and hundreds of heavy trucks ready to deploy around the city to protect neighborhood and business corridors in case of widespread violence. Chicago, like other cities around the nation, will continually re-evaluate security measures all the way to Jan. 20, 2021, Inauguration Day.

“We’re preparing for the worst,” Lightfoot said. “Win or lose, someone’s going to be unhappy.”

Write to W.J. Hennigan at william.hennigan@time.com.