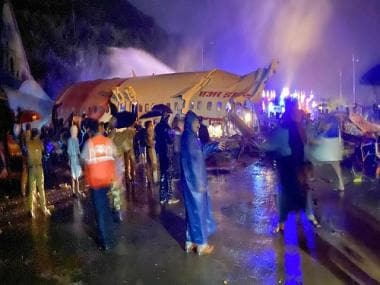 The Ministry of Civil Aviation said that there were 190 onboard the flight, including 10 infants, 2 pilots and four cabin crew members, of whom 17 have died in the accident

Politicians across the board condoled the deaths and injuries caused when an Air India Express flight bringing Indian home from Dubai skidded off the runway at the Karipur Interantiaonl Airport in Kerala’s Kozhikode.

Reports said that 17 people have died several are injured. The flight was reportedly a repatriation flight under the Centre’s Vande Bharat Mission.

The Ministry of Civil Aviation said that there were 174 passengers, including 10 infants, 2 pilots and 5 cabin crew members on board the aircraft.

Kerala chief minister Pinarayi Vijayan expressed shock over the accident. CMO sources were quoted by PTI as saying that Vijayan spoke to Prime Minister Narendra Modi and the latter assured him all help and assistance from the Centre.

These numbers will assist you in providing information about passengers who were on the Air india Express AXB1344 from @DXB to CCJ.

Modi said he was “pained” by the Kozhikode accident and said, “My thoughts are with those who lost their loved ones.”

Pained by the plane accident in Kozhikode. My thoughts are with those who lost their loved ones. May the injured recover at the earliest. Spoke to Kerala CM @vijayanpinarayi Ji regarding the situation. Authorities are at the spot, providing all assistance to the affected.

External Affairs minister S Jaishankar said he is deeply distressed to hear the news about the Air India Express flight tragedy and said further details are being ascertained.

Congress leader Rahul Gandhi, who is also the Wayanad MP, expressed shock “at the devastating news” of the mishap.

“Deepest condolences to the friends and family of those who died in this accident. Prayers for the speedy recovery of the injured,” he said on Twitter. “My thoughts are with the crew, the passengers and their families and friends at this time,” he added.

My heart goes out to the crew and passengers of the Air India plane that has crashed in Calicut and to their families. Our prayers are with you at this tragic and painful moment.

Other Congress leaders also extended condolences over the “unprecedented tragedy”.

Congress general secretary KC Venugopal said, “The unprecedented tragedy at Calicut (now known as Kozhikode) has shocked our collective conscience. Pray to the almighty for the well being of passengers and extend my heartfelt condolences to the families of the deceased. Urge the Congress friends to extend all efforts in rescue efforts.”

Congress chief spokesperson Randeep Surjewala also said, “Shocked at the news of Air India plane crash in Kozhikode. My prayers with passengers onboard the flight. Hope missing passengers are found soon. Wishing a speedy recovery to those injured. Deepest condolences to those who lost their loved ones. May the souls of the departed RIP.”

It must be a nightmarish experience for everyone on the unfortunate ill-fated flight. There are 4 people yet reportedly stuck in the aircraft.

I do hope that most will be fine, but distressed to know that there are casualties including the pilot ( s).

Let’s pray for them.

Senior Congress leader Shashi Tharoor said it was a “tragic day” for Kerala.

“Tragic day for Kerala. First the deaths in Munnar & now this: I hear both pilots have died. Hope rescue efforts will succeed in saving all the passengers,” the MP from Thiruvananthapuram tweeted soon after the news of the accident broke.

Tharoor was referring to a landslide incident, which took place in the wee hours on Friday,  in Rajamala area of Idukki district. At least 15 have died and 50 were feared trapped in the debris. Rescue operations are still underway in Idukki.

Karnataka chief minister BS Yediyurappa also expressed shock over the Kozhikode accident. In his message, he said, “Shocked to hear about Air India Express plane skidding off the runway at Kozhikode airport.

My thoughts are with the passengers, crew and their loved ones.”

Puducherry chief minister V Narayanaswamy took to Twitter and said that he was praying for the speedy recovery of the injured in the mishap.

“I offer my prayers to the dead in the air-crash,” he said.

NCP chief Sharad Pawar and his party colleague and Maharashtra deputy chief minister Ajit Pawar among others expressed grief over the plane crash.

“Disheartened to learn about the plane crash in #Kozhikode. Condolences to the family members of those who have lost their lives. #AirIndiaExpress,” Pawar tweeted.

“Saddened to hear about the #AirIndiaExpress tragedy in #Kozhikode. Praying for speedy recovery of the injured,” said Ajit in a tweet.

“Saddened to hear about the #AirIndiaExpress Plane Crash in Kerala. My thoughts and prayers with family members who lost their loved ones. Wishing the injured a speedy recovery #KozhikodeAirCrash,” Sule tweeted.