Protesters with the activist group Shut Down DC gathered outside the Washington, D.C. home of Postmaster General Louis DeJoy on Saturday morning, banging pots and blasting airhorns in what they said was a “wake up call” for DeJoy to defend the U.S. Postal Service (USPS).

“We need the postal service to #DeliverDemocracy this fall. Stop the attack on our mail!” the group tweeted.

DeJoy, a top GOP and Trump campaign donor, was appointed in May and has launched a major restructuring of the Postal Service, including a hiring freeze and other budget cuts that postal workers say limit their ability to effectively deliver the mail. The Postal Service has recently decommissioned 10% of its sorting machines at facilities across the country, per the Washington Post, leading to growing concern that the slow down of mail delivery will only worsen. In the past week, many examples of USPS workers removing allegedly under-used mailboxes were also documented on social media.

Attention on DeJoy’s actions further increased on Thursday after President Donald Trump appeared to insinuate that he opposed funding the Postal Service in part because it would make it more difficult for Americans to vote by mail. Many states are expanding absentee voting so Americans don’t have to risk their lives by voting in person amid the COVID-19 pandemic come November.

“They need that money in order to have the Post Office work so it can take all of these millions and millions of ballots,” Trump said in an interview on Fox Business Network. “Now, if we don’t make a deal, that means they don’t get the money. That means they can’t have universal mail-in voting, they just can’t have it.”

In the same interview he also repeated the false claim that increasing mail in voting would create “one of the greatest frauds in history.” In reality, states with mail in voting report very low rates of fraud. 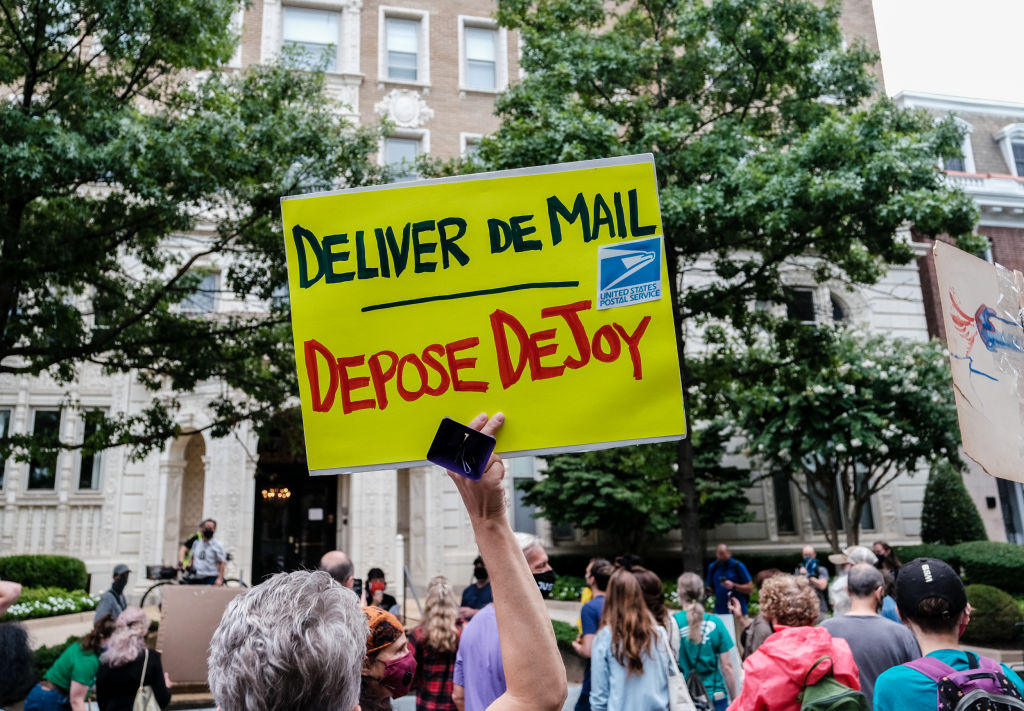 Demonstrators gather outside of the condo of President Donald Trump donor and current U.S. Postmaster General Louis Dejoy on August 15, 2020 in Washington, DC.

In a statement on their website, Shut Down DC said the “purpose behind DeJoy’s appointment as postmaster general became even clearer” after Trump’s interview on Thursday. “During a global pandemic, the postal service is essential to democracy: Postal workers are literally delivering democracy by safely delivering Americans’ votes. And Trump appointed DeJoy, a logistics executive, to gut the safest and most accessible way to vote,” the statement continued.

On Wednesday, Congressional Democrats sent a public letter to DeJoy expressing concern that his restructuring is already causing delays in mail delivery, impacting critical services such as paycheck distribution, tax refunds and the livelihood of many small businesses, as well as the dissemination of crucial medication for many seniors sent through the mail.

“It is always essential that the Postal Service be able to deliver mail in a timely and effective manner. During the once-in-a-century health and economic crisis of COVID-19, the Postal Service’s smooth functioning is a matter of life-or-death, and is critical for protecting lives, livelihoods and the life of our American Democracy,” House members wrote.

In a statement on Saturday, House Speaker Nancy Pelosi said President Trump is “openly working to destroy the Post Office and sabotage its ability to deliver absentee ballots in time to be counted… All patriots, Democrats, Independents or Republicans, should reject the President’s assault on the Postal System in this election season.”

Massachusetts Sen. Elizabeth Warren has called for an internal investigation into DeJoy’s actions, which was launched by the Postal Service inspector general on Friday.

Get our Politics Newsletter. Sign up to receive the day’s most important political stories from Washington and beyond.

Write to Madeleine Carlisle at madeleine.carlisle@time.com.