Control of the United States Senate remained in limbo Thursday as the results of four Senate races were unclear, and while the pathway for Democrats to win the seats needed for a majority still exists, Republicans had strong standing in all of the still-uncalled races.

Going into Election Day, Democrats were bullish about their chances, confident that a presidential election would sweep them into control of both the White House and the Senate as well as expand their majority in the House. The presidential race loomed large over the down-ballot Senate races, and Republican candidates were often strapped to a divisive President who did not go out of his way to help many of them. But by keeping several seats in Republican control in states like Iowa, Montana, and Maine, Republicans at the very least have denied Democrats a straightforward road to the majority they craved.

“This has been overwhelming. I’ve never been challenged like this, and I’ve never had more support than I do tonight,” South Carolina Senator Lindsey Graham, who held off a competitive and well-resourced challenge from Democrat Jaime Harrison, said in his victory speech Tuesday night.

In Georgia, at least one Senate race — the special election — is bound for a January runoff between incumbent Republican Senator Kelly Loeffler and Democratic challenger Raphael Warnock. The other Georgia election, involving Republican Senator David Perdue and Democrat Jon Ossoff, had yet to be called Thursday, but the possibility that it too would head to a runoff seemed likely.

North Carolina Senate results were still pending; Associated Press projections put Republican incumbent Senator Thom Tillis ahead by fewer than 100,000 votes. The Alaska race between incumbent Republican Senator Dan Sullivan and Al Gross, who ran as an Independent with the backing of the Democratic nomination, was also outstanding.

Democrats needed a net gain of four seats to control the Senate but as of Thursday had only a net gain of one, with projected wins in Colorado, of John Hickenlooper, and in Arizona, of Mark Kelly. In Michigan, they were able to defend a vulnerable incumbent in Senator Gary Peters, but Republicans were projected to pick up at least one Democratic-held seat in Alabama. Two days after polls closed, the projected Senate stood at 48-48, far from what Democrats had hoped.

“Everything’s up for grabs in a presidential year like this, where there’s a lot of money being poured into a lot of different places,” says Nate Brand, press secretary at the National Republican Senatorial Committee. 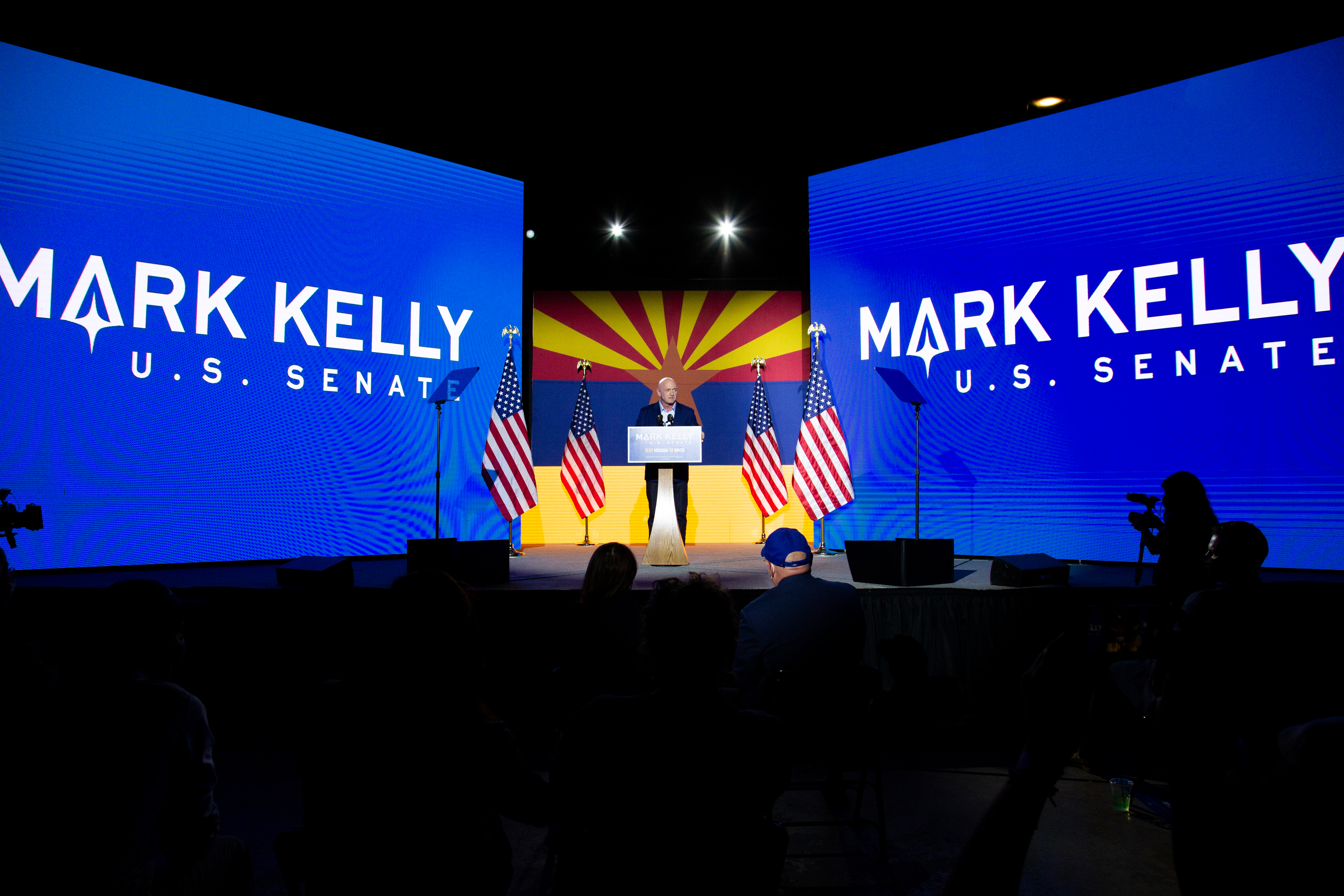 Democrat Mark Kelly speaks to supporters in Tucson, Ariz., on Nov. 3, while awaiting results of his Senate race against Republican Martha McSally.

Results were always expected to trickle in slowly, but the nail-biter ending is surprising given that the Senate battleground was strung out across roughly a dozen competitive states that gave Democrats openings. It’s all the more striking given that Democrats were well resourced, had disciplined candidates and messaging, and were running against what they saw as an unpopular President. This election was understood to be a referendum on the Republican Party, whose candidates were constantly on the defense on issues like their response to the coronavirus pandemic, which has left more than 233,000 Americans dead, and the Affordable Care Act, which Republicans repeatedly attacked.

In the weeks preceding the election, Republican Senate candidates also made unforced errors. Loeffler, the Republican who was appointed to her Senate seat and is moving on to the runoff, claimed she was “not familiar” with the Hollywood Access tape in which Trump brags about sexually assaulting women; the tape made major news when it came to light during the 2016 presidential campaign. Perdue, up for his first reelection in Georgia, race-baited by intentionally mispronouncing vice presidential candidate Kamala Harris’s name. Iowa’s Joni Ernst was off by several dollars when asked at a debate for the breakeven price of soybeans, and she cast doubt on the death toll of the coronavirus pandemic, saying she was “skeptical” of the numbers.

Republicans, meanwhile, were hoping that seating one last Supreme Court justice, which they did with Justice Amy Coney Barrett, would bring persuadable voters back to them. Judiciary issues were traditionally understood as issues that motivated conservative voters more than left-leaning voters, and Republicans attacked Democrats as wanting to expand the courts. By going through a Supreme Court confirmation so close to an election, Democrats were given an opportunity to paint the Republicans as hypocrites for refusing to do so in 2016.

Ahead of the election, even the Senate Majority Leader, Mitch McConnell, openly acknowledged the tough odds stacked against his conference, calling it a 50-50 proposition the week before the election.

President Trump, who some Republicans openly acknowledged was a drag on their efforts at keeping the Senate, was not exceptionally helpful and at times interfered with members of his own party. One example was his tweeting that Maine Senator Susan Collins, a longtime moderate often at odds with the President who was fighting for her political career in her fourth reelection campaign, was not “worth the work.”

“The Senate is very tough,” Trump reportedly said at a private fundraiser in October, according to The Washington Post. “There are a couple senators I can’t really get involved in. I just can’t do it. You lose your soul if you do. I can’t help some of them. I don’t want to help some of them.”

But Collins won her race, apparently beating Democrat Sara Gideon by a healthy margin, even as the state went to Biden.

—With reporting by Madeleine Carlisle

Write to Lissandra Villa at lissandra.villa@time.com.