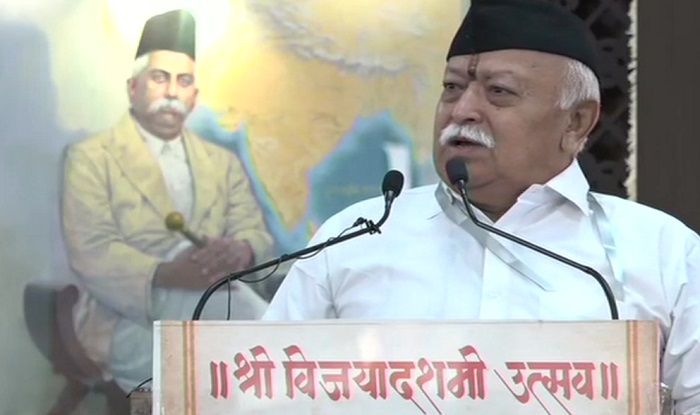 New Delhi: “The Citizenship Amendment Act (CAA) doesn’t oppose any specific religious community”, said Rashtriya Swayamsevak Sangh (RSS) chief Mohan Bhagwat, in his address at the annual Dussehra function at Maharshi Vyas auditorium in Nagpur.  He asserted that those who wanted to oppose this new law misled our Muslim brothers by propagating a false notion that it was aimed at restricting the Muslim population. Also Read – Indian Muslims Most Content in World, Constitution Did Not Say Only Hindus Can Stay in The Country: RSS Chief Mohan Bhagwat

“Using CAA, opportunists unleashed organised violence in the name of protests. Before it could be discussed further, the focus shifted on coronavirus this year. So, communal flare in minds of few people stayed in their minds only. Coronavirus overshadowed all other topics. In the background, the efforts by rioters and opportunists to reignite the conflict still continue,” he added. Also Read – ‘I Am With BJP-RSS Now, Will Control ‘Goondagardi’ Says Ex-Navy Officer Madan Sharma Who Was Attacked by Shiv Sena

Listing ‘noteworthy’ incidents that took place this year, Bhagwat said, “Before last year’s Dussehra function Article 370 became ineffective following due parliamentary procedures. Bhoomipujan for grand Ram Mandir was performed on August 5, 2020, based on Supreme Court’s unambiguous judgment on November 9, 2019. During the groundbreaking ceremony of the Ram temple, we witnessed the patience and sensibility of all Indians during these events. The lawful passage of the Citizenship Amendment Act (CAA) also took place”. Also Read – IPL 2020: VIVO Should be Removed Permanently as IPL Sponsors: RSS-Affiliate SJM

He also spoke about the ongoing standoff between Indian and Chinese army along LAC. “India’s defence forces and citizens stood firmly in front of China’s attack, displaying their determination & valour. From both strategic & economic point of view, China got an unexpected jolt. We don’t know how China will react, so we need to be vigilant”, said Bhagwat.

The RSS chief also performed Shastrapuja, the Hindu tradition in which arms are worshipped annually in Dussehra by warriors.

RSS marks Vijay Dashmi as one of its biggest events when the RSS chief addresses the RSS workers on a number of issues concerning politics, society, national security and family values. This year, only 50 volunteers were allowed inside the auditorium due to the COVID-19 pandemic.

“This is probably the first time in Sangh’s history since its foundation day that a # RSS Vijay Dashmi programme, is being organised with such a restricted low number. We have done this keeping in view the COVID-19 protocol,” Bhagwat said.