On Oct. 2, just a few hours after President Trump announced on Twitter that he was infected with COVID-19, his national security adviser sat down in Geneva with a group of Russian officials. At the top of their stated agenda was the Kremlin’s effort to influence the U.S. elections, an issue that Russia had shown a sudden eagerness to discuss with the Trump Administration barely a month before the vote.

The talks in Geneva – between National Security Adviser Robert O’Brien and his Russian counterpart, Nikolai Patrushev – were the latest sign of how Russia has shifted tactics since 2016. The risks of launching another full-scale campaign of cyber interference have come to outweigh the foreseeable rewards, sources in Moscow’s security and foreign policy establishment tell TIME. Given how badly President Trump is doing in the polls, the Kremlin appears to be hedging its bets, pursuing a less aggressive influence campaign in these elections while also offering the Americans a half-hearted truce.

“From our side, it’s a pre-emptive step,” says a former senior intelligence officer in Moscow who maintains close ties with the security establishment. If Joe Biden defeats Trump at the polls, says the former officer, “We need a way to start the process of normalizing relations.” He adds: “We don’t want to be accused of interfering again. We’ve had enough of that.”

Russia’s actions in recent weeks have reflected those concerns. By this point in the 2016 election cycle, Russian operatives had launched an attack on two fronts: spreading disinformation through social media and, at the same time, using cyberattacks to hack U.S. election infrastructure and the Democratic Party. “We have not seen that second part yet this year, or this cycle,” Christopher Wray, the FBI director, told the House Homeland Security Committee on Sept. 17.

Russia has focused instead on less invasive forms of interference, which Wray described as a “very active” Russian effort to influence the elections through social networks and state-run media, “both to sow divisiveness and discord and … primarily to denigrate Vice President Biden.”

These efforts also appear to be weaker this time than they were in 2016, says Bret Schafer, who tracks foreign disinformation campaigns at the Alliance for Securing Democracy, a bipartisan advocacy group founded in 2017 to study election interference. “To date, they don’t seem to be particularly successful,” Schafer wrote in an email to TIME on Tuesday.

The reason, he says, comes down to two factors. Facebook and other social networks have begun actively shutting down the kinds of fake accounts that Russia used in 2016 to spread disinformation among U.S. voters. The other reason Russian propaganda might seem less visible online, says Schafer, is that “our own discourse on social media is so toxic, polarized, and filled with wild conspiracy theories, that it is somewhat unnecessary for Russia to do too much more than amplify what’s already out there.”

With several weeks to go before Election Day, the Kremlin still has plenty of time to launch a more aggressive influence operation or hacking attack. Michael Carpenter, a former Pentagon official, says Russia’s cyber operatives may also have become much better at covering their tracks. “While it appears that they have perhaps not been as aggressive in the cyber domain as they were in 2016,” he says, “I’ll want to see the after-action report in, say, January 2021, before making any definitive pronouncements.”

Even in contemplating an attack on these elections, Russia risks a greater backlash from the U.S. than it did in 2016, while the potential payoff from another Trump term feels almost negligible from Moscow’s perspective, says Fyodor Lukyanov, a foreign policy expert who advises the Russian government on international affairs. During his first four years in office, Trump has not delivered on his promise to improve U.S. relations with Russia. “If we look at the situation in our relationship at the end of Trump’s term, it’s a real disaster,” he says. “It doesn’t matter what kind of ideas he had initially. He failed, or he disregarded them.”

That doesn’t mean Russia is taking a neutral stance in these elections. Even a cursory look at the coverage on Russia state TV is enough to understand that Trump is the Kremlin’s favored candidate. After Trump was hospitalized over the weekend with symptoms of Covid-19, the main news and analysis show on Kremlin-owned Channel One aired a lengthy segment extolling the President’s virility. “Both to his friends and enemies, he answered like the Terminator: I’ll be back,” the voiceover intoned.

A few days earlier, President Vladimir Putin had paid Trump similar compliments in a get-well message. “I am sure that your inherent vitality, vigour and optimism will help you overcome the dangerous virus,” Putin wrote in a statement on the Kremlin website.

But his apparent preference for Trump has mostly to do with his aversion toward Biden, says Lukyanov. Moscow has surmised that many of Biden’s advisers still hold a grudge over the Russian campaign of interference in 2016, he says. And if Biden wins, “They would love to take some kind of revenge.”

At the very least, Biden has said he would exact a high price for any interference in this year’s election. In a statement issued in July, the candidate said he was “putting the Kremlin and other foreign governments on notice.” If elected president, he added, his administration would retaliate against any election meddling through “sanctions, asset freezes, cyber responses, and the exposure of corruption.”

Russia is in no position to take such warnings lightly. The recent collapse in the price of oil and gas, Russia’s most important exports, has strained the national economy, as have the lockdowns imposed to curb the pandemic. The value of Russia’s national currency plummeted at the end of September to its lowest levels since April, driven down in part by fears of U.S. sanctions against the Russian economy, according to a report in Bloomberg. “When one side imposes sanctions, the other side likes to say, ‘We don’t care,’” the former Russian intelligence officer tells TIME by phone from Moscow. “But in reality, we do care.”

The same goes for the potential blowback Russia could see in cyberspace. In response to Russia’s hacking offensive in 2016, the U.S. military has reportedly installed malware in Russia’s power grid, the digital equivalent of planting remote-controlled bombs. If the U.S. deploys such weapons to retaliate against a Russian hacking operation, it could escalate into a full-blown cyber war, says the former Russian intelligence officer.

“Yes, all these other campaigns are unpleasant – the disinformation campaigns, the influence on mass perception,” he says. “But the bigger problem is with military applications of information technology, like the hijacking of critical infrastructure. That is worrying. The rest is secondary.” 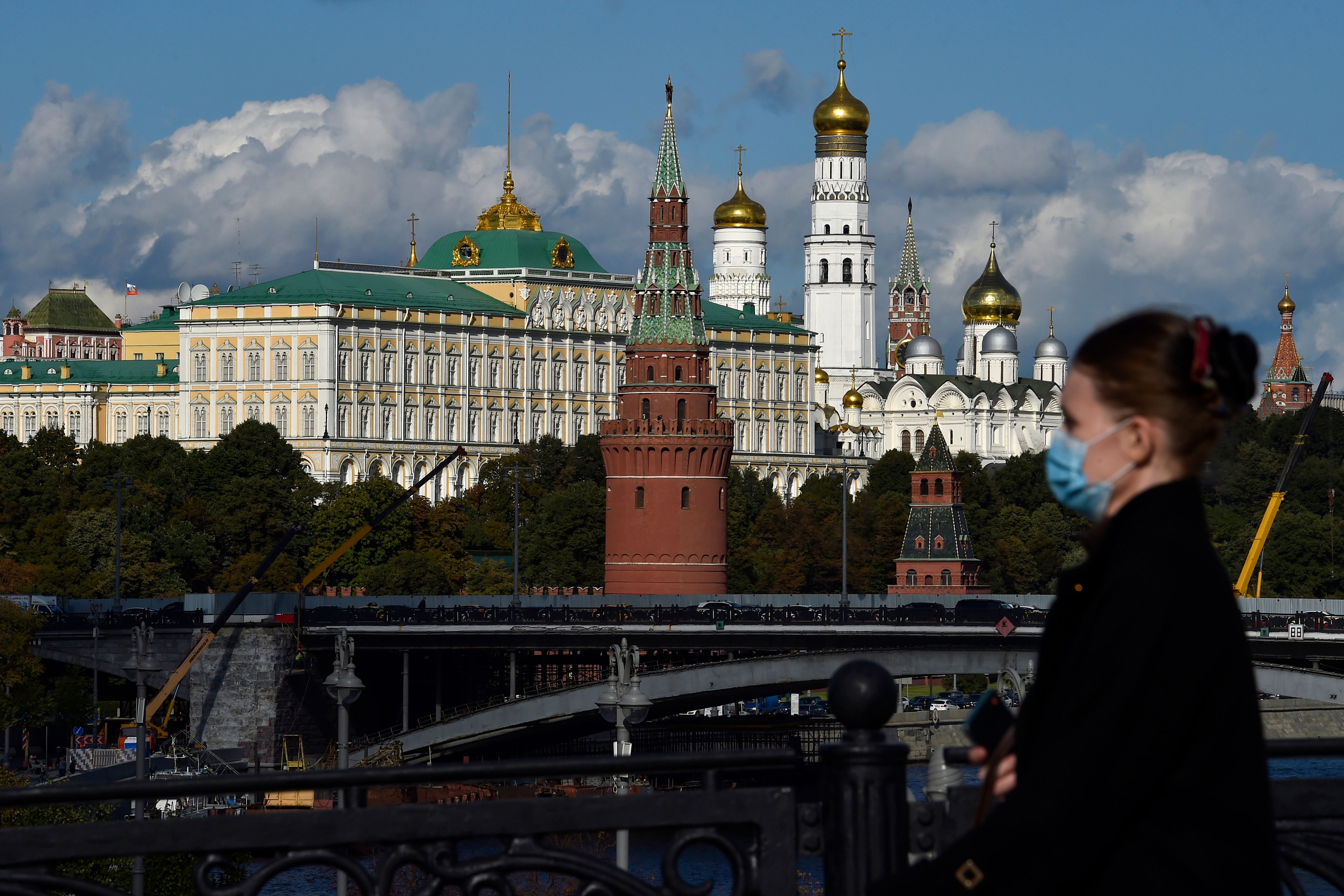 A woman wearing a face mask to protect against the coronavirus disease walks in downtown Moscow, with the Kremlin seen in the background, on Sept. 15, 2020.

That seemed clear from the unsolicited peace offer Putin made last month. In a statement published Sept. 25 on the Kremlin website, he warned the U.S. about the “risk of a large-scale confrontation in the digital field.” To help avert that risk, he said, the U.S. and Russia should exchange “guarantees of non-intervention into internal affairs of each other, including into electoral processes.”

Putin has made similar appeals to the Trump Administration before. During their summit in Helsinki in July 2018, the Russian President even suggested creating a “joint working group on cyber security” to investigate Russian meddling in the 2016 elections. Trump initially supported the idea. But he backed away after it was widely ridiculed, even within his own party.

This time around, the Trump Administration took Putin seriously enough for O’Brien to discuss the offer with Patrushev, a hardline veteran of the KGB who has served as Putin’s right hand on defense and security issues for two decades. The two sides came out of the talks Friday with diverging messages. In an interview with Face the Nation, Trump’s envoy said he had delivered a stern message to the Russians: “There would be absolutely no tolerance for any interference with our Election Day.” His Russian counterpart put a different spin on the outcome: “Both sides confirmed a lack of intentions to interfere in each other’s internal affairs.”

Coming on the day of Trump’s hospitalization with Covid-19, the meeting in Geneva made barely any headlines, though it did attract some sarcastic remarks about Putin’s supposed promise not to interfere this time. “No problem at all then,” Michael Hayden, the former director of the CIA, wrote on Twitter. “Thank you Mr. Putin.”