“The legend says this sword belongs to the one true king. But what if the sword chooses a queen?” That’s the question at the heart of Cursed, a new Netflix series billed as an epic reimagining of the ancient Arthurian legend, told through the eyes of Nimue, played by Katherine Langford (13 Reasons Why). The series follows Nimue, a young woman belonging to the magical Fey people, as she seeks to fulfill her mother’s dying wish and reunite the mysterious Sword of Power with the sorcerer Merlin, with the help of Arthur, a mercenary she meets along the journey.

Based on an illustrated novel by Tom Wheeler and artist Frank Miller, the series includes several references to the myths of Arthur and the famed sword Excalibur. Nimue’s own character is based on the mystical Lady of the Lake, an enchantress who was said to have gifted Arthur with Excalibur. Here’s a look at the Lady of the Lake’s story, and how her tale has continued to captivate people throughout the centuries.

The origins of the character

Sometimes referred to by the names Nimue or Vivienne, the character of the Lady of the Lake first appeared in early 13th-century French literature. But her exact role is often ambiguous, conflicting among different versions of the legends. In one early version of the story, in which she is depicted as a young woman called Viviane, Merlin becomes besotted with her, although she refuses him until he has taught her all of his magical powers, later using the magic to entrap him in an invisible tower.

In a later version, the character appears as an adult woman, and the narrative is dedicated to her role as a foster mother to a young Lancelot, who would later grow up to be one of King Arthur’s heroic knights. She’s depicted as caring and motherly, giving Lancelot the advice: “A knight should have two hearts, one as hard and impenetrable as diamond, and the other as soft and pliable as hot wax.” The storyline with Lancelot echoes a German medieval romance written around the late 12th century, where the hero’s childhood and upbringing was guided by a magical water fairy. 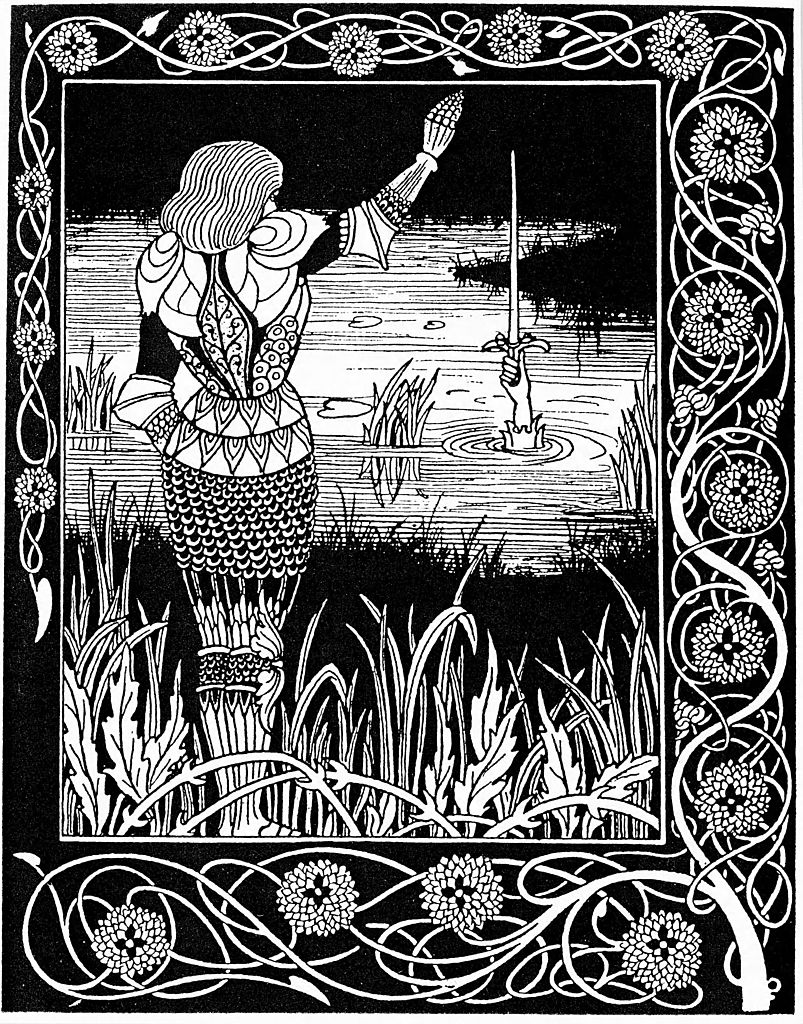 Excalibur being reclaimed by the Lady of the Lake, 1893. A hand emerging from the lake to reclaim Excalibur, the sword which, according to legend, the young Arthur pulled from the stone to prove he was the rightful king. The sword was returned to the lake upon Arthur’s death. From Thomas Malory’s Le Morte Darthur.

Historians have noted the inconsistencies in her character, as the tales have depicted her both as virtuous and devious, benevolent and malicious, a powerful prophet bestowed with magical powers and a young ingenue who was capable of wisdom. While some of these early texts presented the Lady of the Lake character in a negative light, the 15th-century compilation by English writer Thomas Malory, titled Le Morte d’Arthur, reimagined her as a more positive force. The title “Lady of the Lake” is thought to refer to two different people in this version, one of whom is called Nymue, who is seen as heroic and characterizes her magical powers as gifts granted to her by God, indicating the growing religious values and concerns of the era. In Malory’s version, the unnamed Lady of the Lake gives King Arthur the famed Excalibur sword at a lake in exchange for an unspecified promise he must later fulfill. Later, Nymue becomes one of King Arthur’s key advisers, and it is she who is reunited with the magical weapon when he becomes fatally wounded.

Her evolution in later depictions

More than 300 years later, the Scottish novelist Walter Scott drew on the legends for inspiration in his 1810 poem titled The Lady of the Lake, a romance story that departs from the original myths and transplants the story to the Scottish Highlands. But it was English poet Alfred Lord Tennyson’s retelling of the legends of King Arthur in Idylls of the King, a cycle of twelve narrative poems published between 1859 and 1885, that firmly tarnished the Lady of the Lake’s character. Like Malory, Tennyson split the overall figure of “the Lady” into two: In a poem dedicated to the relationship between Merlin and Vivien, she is portrayed as a wily temptress, trying to seduce first the King, and then Merlin, with the villainous intentions of trapping the sorcerer and destroying the King’s Round Table. In a second interpretation, a figure reaches up from a lake on the island of Avalon to retrieve Excalibur from one of King Arthur’s knights. Idylls is widely thought to be an allegory for Victorian society, and the reversal of strict gender roles in the story of Merlin and Vivien is designed to show the havoc that “untamed women” could wreak.

Some more recent interpretations have been more favorable to the Lady of the Lake. Novels including Mary Stewart’s The Last Enchantment (1979) and Marion Zimmer Bradley’s The Mists of Avalon (1983) have sought to show more well-rounded representations of her and other female characters from the Arthurian legends, and in Meg Cabot’s 2005 young adult novel Avalon High, the Lady of the Lake is loosely reinterpreted in the form of Ellie, a heroic high school student. Depictions of the Lady have spanned across mediums too; in the 2008-2012 television series Merlin, the witch Nimue served as the primary antagonist, and in Guy Ritchie’s 2017 fantasy film King Arthur: Legend of the Sword, the Lady features in a minor role in returning Excalibur to Arthur.

How Cursed moves the Lady of the Lake’s story forward

Continuing in the tradition of more recent reimaginings of the Lady of the Lake’s role, Cursed positions Nimue as the protagonist and gives her a more nuanced character beyond the enchantress who gave King Arthur his sword. We see a young Nimue taunted by other children in her village for the strength of her magical powers, and when she is chosen by mystical forces, known as the Hidden, to become her people’s protector and leader, she tries to run away and escape the responsibility. When Nimue’s village is the target of a brutal attack by the Red Paladins, Christian crusaders intent on ridding the land of magical folk, her mother smuggles the sword of power to her and asks, as her dying wish, that Nimue give the sword to Merlin. 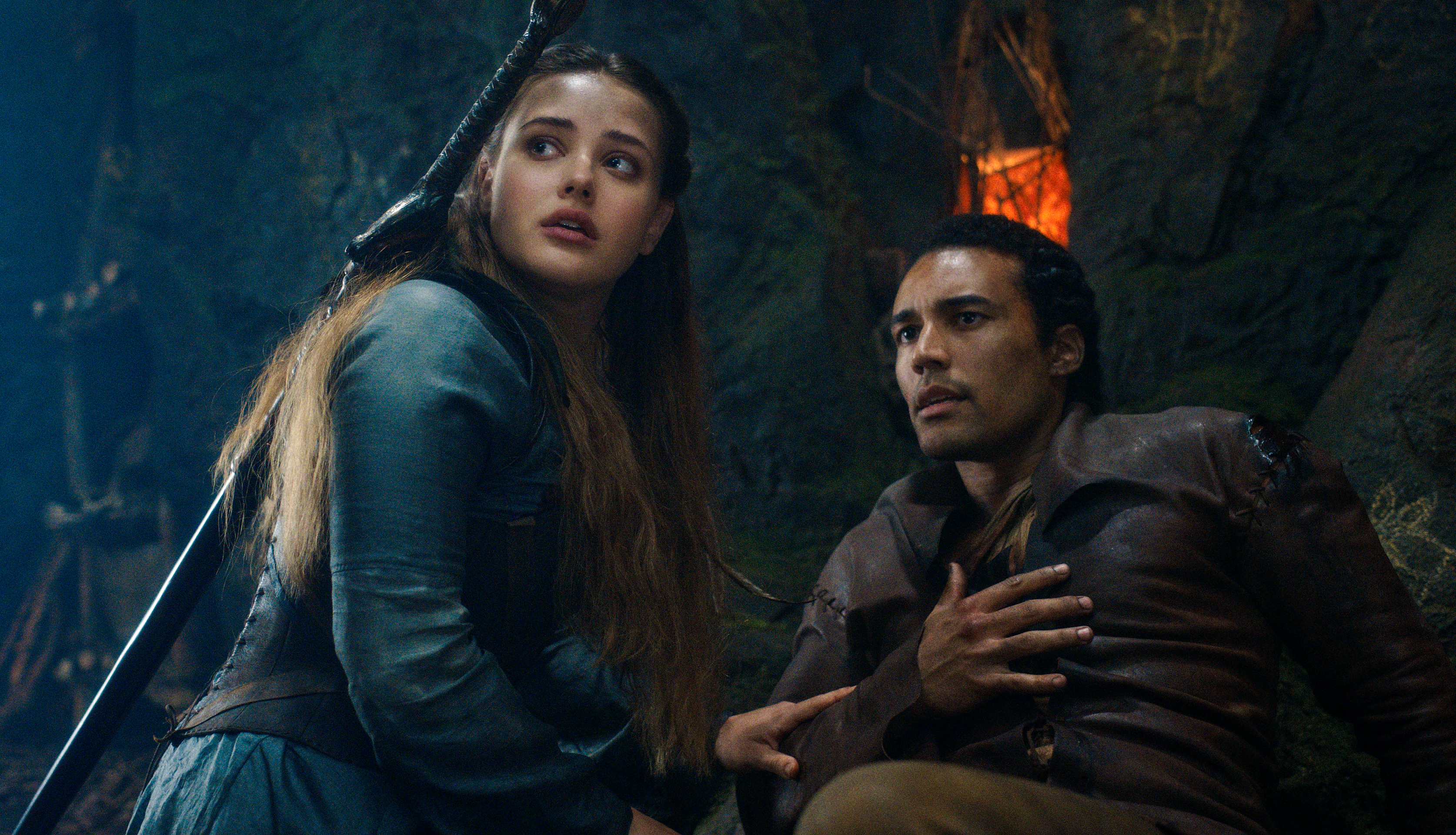 Katherine Langford as Nimue and Devon Terrell as Arthur in ‘Cursed’

During her quest to bring the mystical sword to the chief sorcerer, Nimue crosses paths with Arthur, a lowly aspiring knight-turned-mercenary whose family has fallen on hard times, and develops a fearsome reputation as the “Wolf-Blood Witch,” intent on avenging her people. Unlike in the legends, Merlin is not Nimue’s lover; their relationship is reinterpreted with surprising new complexities. Her narrative arc shows how she grows into an active leader, rather than some of the more passive, or overtly villainous, past characterizations of the Lady of the Lake.

The series starts and ends with Nimue’s body submerged in a lake, having suffered injuries in an assassination attempt. Yet the final frame is left slightly ambiguous as she is suspended in the water, leaving the audience to wonder whether she might wield the “sword of the first queen” once more.