Bunkueanun ‘Francis’ Paothong, a 21-year-old bespectacled university student, is one of three protesters recently arrested under the rarely invoked section 110 of Thailand’s criminal code. The charge of violence against the queen carries a maximum sentence of life imprisonment, or, if the queen’s life is perceived to have been endangered, the death penalty can be applied. The protesters were attending an Oct. 14 rally when Queen Suthida’s motorcade drove by. Francis and another protester, Ekachai Hongkangwan, were arrested on Oct. 16, while child welfare activist Suranat Paenprasert was arrested the following week.

This is Francis’ account of how he wound up facing the harshest penalty levied against a demonstrator since this round of rallies against the Thai government and monarchy began in June. What follows has been edited for length and clarity.

You can say that my household is conservative in its nature. Initially, I was pretty much a conservative too.

I began to disagree with my parents when I was in senior high school. As I started reading newspapers and following American politics, I began to formulate my own opinions about how things could be if this country was still a democracy.

Three-quarters of my life have been spent under military dictatorship. At first, I did not really see any difference between democratically elected governments and military dictatorships, but at this point I am seeing that it has already had an effect on me and my future. In my mind, I began to question the government.

Read more: Why Are Thai Protesters Risking Jail to Criticize the King?

This was when I went to Canada as an exchange student. It was around the 2016 U.S. presidential debates. I recognized that whoever becomes president of the United States determines what will happen next around the world. During the debates, it dawned on me that I was drawn more to the Democrats, specifically to the ideas of Senator Bernie Sanders.

My thinking about the monarchy’s role in politics also developed over the years, although of course I still had a full-blown cry when the previous monarch, Rama IX [King Bhumibol Adulyadej], died. He was a father to our people.

My mother is a royalist through and through. While my parents believe that the king should be all powerful, that we should not touch even the issue of the monarchy, this is where I disagree. We should at least be able to talk to them about how this is going to work going forward. We are now living in the 21st century, it’s not like the Dark Ages anymore.

A week before I returned to Bangkok, when my university reopened [on Sept. 7], my parents and I had some discussions about me going to the protests. They said I could say whatever I like about [Prime Minister] Prayuth Chan-ocha or the constitution. But don’t touch the issue of the monarchy. I’ll do what I can, that’s what I said.

But by September, the whole landscape of the protests had changed and now there were these very lively, very public discussions about reforming the monarchy itself. I didn’t really know what to do. I thought I would be safe because I am more in the middle ground and not advocating for abolishing the monarchy.

Still, I tended to tell my parents I was not going to go, and they tended to believe me. But at the Oct. 14 protest, well—it was evident with my face on TV as the royal motorcade went by.

On that day, I was going to the protest, sure, but I was also there with a group called Anti One China-Thailand and we went to sell our merchandise to fund raise. But when we got to the Government House there was a whole series of events that transpired that resulted in me getting charged.

The police tried to move my friend away, grabbing her by the back and causing her to fall to the ground. That’s when I started using my megaphone. In the next 10 minutes, the police formed into what looked like what was about to be an anti-riot operation. The police started charging and the protesters moved in, and there I was in the middle. The next thing I knew, I saw the royal motorcade coming from over the police’s shoulder.

I was like, sh-t. Because something is bound to be wrong if you’re in front of the royal motorcade.

I tried to calmly tell the protesters to move away from the police barriers so that the royal motorcade could move through. People flashed the three-finger salute [from the Hunger Games]. Some shouted “My taxes!” meaning is like, hey, we are taxpayers, we should be able to have a say in running this country too.

The instant my parents saw me on TV they called me. They began to shout, ‘Francis, go back home.’ They told me they were coming to [Bangkok to] check on me. It was maybe a three or four-hour drive from my hometown. When I got back to my apartment, they were there and gave me an earful about how I should not have been [at the protest] in the first place. There was a lot of shouting. We fought for well over two hours.

It was the next day that I found out I was being charged.

I was reading a Thai language news outlet called Matichon and they had some details about the arrest warrant for Ekachai Hongkangwan and myself on charges of harming the queen’s liberty, section 110. When I saw the charges I was like f–k me, excuse my language, but I was dumbstruck. Protesters have been facing different charges, like maybe section 116 [for sedition] and section 112 [lese majeste] and violations of the public gatherings act and some other things like that. But these charges—oh God. Those who harm the queen’s liberty or intend to harm the queen’s liberty will face the jail time no less than 16 years up to life imprisonment. How the hell?

I told my mum about it. I had her read the news. And she began to panic. 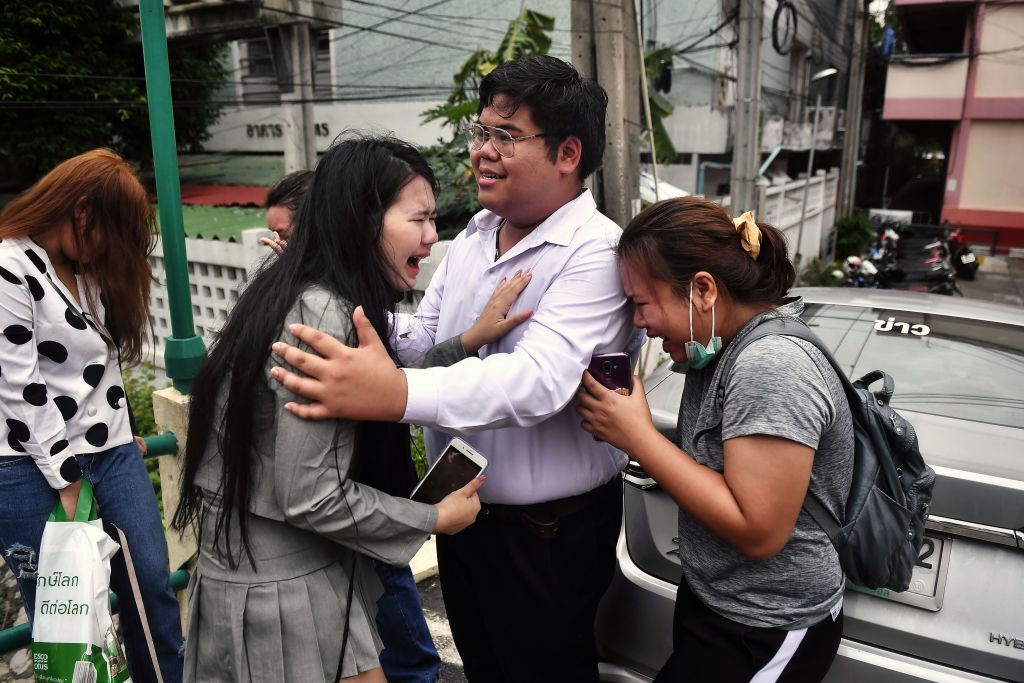 The lawyers I called were from the group called Thai Lawyers for Human Rights. They usually handle cases with political prisoners and stuff like that. They told me in all their years of working as attorneys they had never seen a case like this before. There’s not even been a mention of it in the Thai Supreme Court mind you. The last time it was used against a common man was maybe more than 100 years ago? I didn’t know what to do until my mother called one of my relatives who used to be a police officer working in the courts. And he said you should turn yourself in tomorrow morning.

Friends who knew of my situation that night came by my apartment to try to console me.

It was well into midnight that I began my prayer. I thought to myself that whatever happens from now on, it will be a struggle. I am not a Christian man myself. But the prayer gave me comfort and strength.

The next morning, at maybe 7:00 or 8:00 a.m. I went to the police station with my parents. I kept thinking, ‘Well, whatever happens I have to face it.’ My lawyers already told me that I should not be hoping too much.

After I reported myself to the police, they arranged a car for me to bring me to the Border Patrol Police Region One headquarters, in Pathum Thani, the neighboring region of Bangkok. They brought me into an auditorium they had prepared specifically for handling the protests. They allowed only my lawyers and my parents to join me. We arrived there around noon. Ekachai, the co-defendant, came a bit later.

I knew outside, the protests were escalating. But there was nothing I could do except wonder what would happen next. I went to sleep at 8:00 p.m.

Around four hours later, I was woken up by another group of protesters that the police had brought in. It was two prominent protest leaders: Tattep Ruangprapaikitseree and his boyfriend James Panumas Singprom and some other people. I went to see if they were OK. And Tattep said to me, [your] case is so bad. He said, ‘Don’t worry. We will fight for you.’

There were some opposition members of parliament coming to visit me. [Opposition MP and activist] Rangsiman Rome came and said to me it is really, really cruel what you have gone through. And I know it is. But I was in good spirits. I was still cracking jokes at that time. At this point, I just thought how historically perverted it is that I am one of the first being charged with this.

Read more: Why This Thai Billionaire Is Risking It All to Back Reform

I was woken up again at 5:25 a.m. by the officers. I asked them if it was time to go to the criminal court now. They said yes.

While I was waiting one of the officers there told me something I didn’t really expect. The border police officer said, “I am rooting for you, so keeping fighting on. I believe in your innocence.” I said thank you.

There was no hope for me to get a bail out. Everybody said so. Even Ekachai said so.

I didn’t know who Ekachai was until someone told me was a defendant in a previous, lese majeste case. He already went to jail once. He gave me a lot of advice.

Right before the prison transfer, the bail decision came. And I got out. [Ekachai did not make bail].

Now I have to wait for the evidence against me to be revealed. I have to report to the court on Dec. 4. But at this point I am more than hopeful that this case will be dismissed, or that my innocence will be proven should it proceed. I haven’t given up hope from the very start until now. I was innocent then. I am still innocent now.

I think they are trying to make an example of me. But I daresay that what happened has just made a lot of people angrier.

Even though the incident was unfortunate for my wellbeing and mental health, I don’t think I regret going to the protest that day actually. I was just there to exercise my rights and my liberty as a citizen of this country.

I still wholeheartedly support the protests. I don’t know what will happen next. I just know that when people start to come together demanding something better it gives me hope that this country could be in be in a position where people are able to change their own destiny.

I admire President Franklin D. Roosevelt a lot. He once wrote, “The only limit to our realization of tomorrow will be our doubts of today.” I quoted this right before I turned myself in to the authorities. I walked on, without doubts, with a strong and active faith. That is what I intend to keep doing.