Husam Zomlot says he never had curtains fitted for the house that was his residence for a year and a half in Washington D.C.

So convinced was the head of the Palestinian Liberation Organization’s mission to the U.S. that his family’s stay would be temporary that much of their luggage remained in boxes months after they moved in in spring 2017. A compromise reached with his wife saw them eventually unpack, but new curtains were my “red line,” Zomlot tells TIME from London, where he was subsequently re-assigned. His caution ended up being prescient: a State Department official told Zomlot in fall 2018 that the Trump Administration would be shuttering the PLO’s mission.

For all Zomlot’s skepticism, the closure had not seemed inevitable. On his visits to the White House, discussions between President Trump and Palestinian Authority President Mahmoud Abbas had been constructive and the two appeared to have good chemistry, Zomlot thought. Still, it quickly became apparent the White House team of Special Advisor Jared Kushner, Jason Greenblatt and Ambassador David Friedman “looked at us as a people with needs, rather than people with rights,” he says. The office’s closure was “a very clear sign of where things were heading.”

Trump’s White House led a radical departure from the U.S.’s traditional role as the honest broker between Israelis and Palestinians that produced the Camp David agreement in 1978 and helped seal the Oslo Accords in 1993. Trump instead threw his weight behind Israeli goals — his administration moved the U.S. Embassy in Israel to Jerusalem, cut funding to the U.N.’s organization for Palestinian refugees (UNRWA), and adjusted America’s long-held view that Israeli settlements in the West Bank are “inconsistent” with international law.

The Palestinian leadership declined to participate in the 2019 economic conference the Trump Administration ran under the auspices of its so-called Middle East Peace Plan, which—when it was finally unveiled in January—proposed to greenlight Israel’s annexation of swathes of occupied Palestinian territory.

Now, with just over two weeks until the U.S. Presidential election, and with Democratic candidate Joe Biden maintaining a steady lead in national polls, Zomlot is weighing what a Biden Presidency might mean for the region. He’s far from alone. In his latest explicitly partisan statement, U.S. ambassador to Israel David Friedman on Oct. 4 suggested a Biden Presidency would be bad for Israel and the Gulf countries‘ security. Meanwhile, Israel’s Civil Administration High Planning Council reconvened after eight months last week to advance more than 4,900 new settlement units in the West Bank. That drew condemnation from the UK, France, Germany, Italy and Spain, and analysts deemed it a bid for the West Bank’s governing body to cram in “as much as it can under the wire” as a hedge against a potential Biden win.

Analysts say Friedman’s concerns are overblown. “Biden has long been committed to Israel and will continue that relationship,” says Sanam Vakil, deputy director of the Middle East North Africa Programme at London-based think tank Chatham House. But others may see a change in U.S. administration as a potential opening. “The Palestinian leadership that has been extremely frustrated by the Trump Administration’s pro-Israeli position sees a Biden win as an opportunity to return to the negotiating table.” 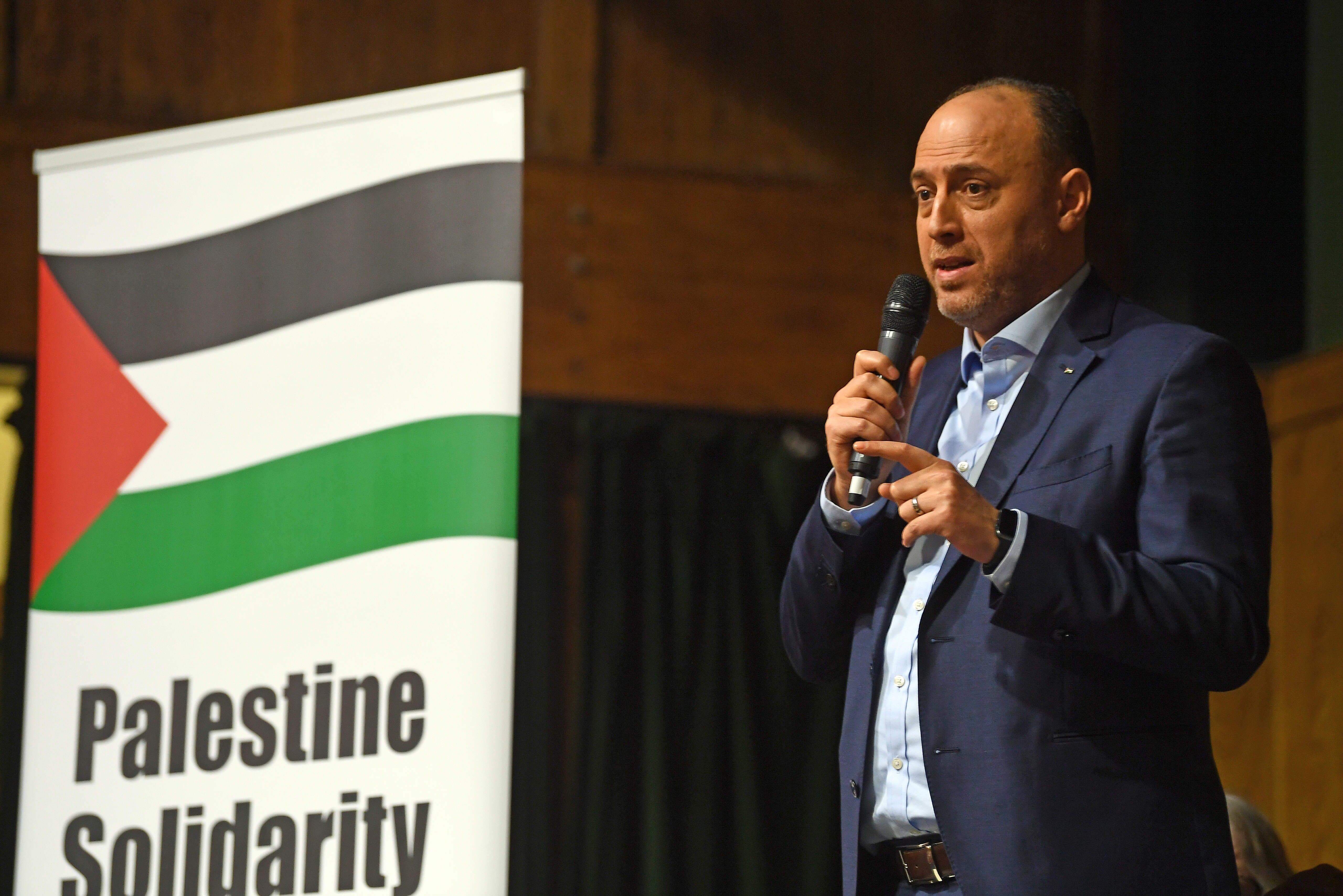 Ambassador Husam Zomlot, Head of Palestinian Mission to the UK, speaking at Exist, Resist, Return: No to Trump’s deal! organized by the Palestine Solidarity Campaign, at Conway Hall in London.

When Israeli Prime Minister Benjamin Netanyahu in 2015 bypassed then-President Obama’s White House to speak directly with Congress and warn against the U.S.-led nuclear negotiations with Iran, it underscored the sour personal relationships between the U.S. and Israeli leaders.

Netanyahu’s relationship with Trump couldn’t be more different. Before Israel’s April 2019 elections, Netanyahu’s campaign team posted gigantic posters of him and the U.S. President above Jerusalem’s highways. Trump made several pro-Israel policy moves—such as recognizing Israeli sovereignty over the Golan Heights—viewed by many as timed to advantage Netanyahu in polls. The Israeli prime minister, dogged by corruption allegations and his perceived mishandling of Israel’s economy and response to COVID-19, may have to contest another election in the coming months—potentially without such an accommodating friend in the White House.

Trump polls more favorably against Biden in Israel than in the U.S. Recent polling showed that 50% of Israelis want the incumbent to win on Nov. 3, compared to only 21% who prefer Biden—a reversal of the situation in 2016, when most Israelis preferred Hillary Clinton to Trump. Though there is little polling available, Palestinians are less likely to be in favor. Should Trump win re-election on Nov. 3, Palestinian Authority Prime Minister Shtayyeh told reporters last week, “God help us.”

Yet in spite of Trump’s positive approval numbers, “there’s very little interest in the U.S. election,” says Yohanan Plesner, President of the Jerusalem-based Israel Democracy Institute. “Probably the least in all presidential campaigns that I can recall in recent Israeli history.”

That’s not to say Israelis don’t care about the relationship with America. It is extremely important because the Jewish State is the only democracy in the world that faces an “existential threat” from its adversaries, says Plesner. But the ambivalence owes to the overwhelming nature of Israel’s domestic economic and the constitutional crisis related to Netanyahu’s legal woes. It is also rooted in widespread skepticism that progress on the Israeli-Palestinian conflict can be achieved no matter who sits in the Oval Office.

That’s an impression U.S. ambassador Fridman attempted to challenge. In an Oct. 4 interview with United Arab Emirates-based media outlet Al Ain News, he claimed that Biden’s approach to Iran would put the Gulf and Israel in danger, adding that the 2015 Iran nuclear accord known as the JCPOA had created “a path for Iran to get a nuclear weapon.”

Experts disagree. The Israeli security establishment “almost as one” thought that Israel was safer when the JCPOA was alive and well, says Nimrod Novik, a former advisor on foreign policy to the late Shimon Peres and Israel fellow at the Washington-based Israel Policy Forum, which supports a two-state solution to the conflict.

Although Israeli defense experts were concerned about some elements of the deal, the consensus was that those issues would have been better addressed within the multilateral framework, Novik says. But, he adds, it had an unplanned upside of warming relations between Israel and Arab neighbors like the UAE and Bahrain. “The less credible the U.S. became, the less secure Israel became, the more countries in the region felt that they had to normalize with Israel in order to legitimize security coordination,” Novik says. “It was an awkward way of getting a benefit from a wrong policy.”

Should Trump win re-election in November, analysts expect more Arab states—perhaps even Saudi Arabia—to normalize relations with Israel. However, they add, normalization would not necessarily promote stability in the Middle East nor advance U.S. interests in the region.

Should Biden succeed, then many in Israel and the Palestinian territories will be looking for evidence of how the new administration might define relations. The 2020 Democratic Party Platform, which calls for the creation of a “viable” Palestinian state, in which Palestinians “should be free to govern themselves,” and explicitly opposes “unilateral action” from either side, is one place to start. Democratic strategist Joel Rubin, who served as Jewish Outreach Director for the Bernie Sanders 2020 presidential campaign, wrote in Israel’s Haaretz newspaper that it was “the most realistic and most progressive of its kind.”

That’s promising, Zomlot says, as is the party’s statement that Palestinians and Israelis have an equal right to freedom. But, he adds, the omission of any mention of Israel’s “occupation” is a reflection that the platform is a political, rather than a policy document.

The left-wing of the party had called for an even more aggressive strategy towards Israel over the treatment of Palestinians. In June this year, weeks before the deadline Netanyahu had set to begin “extending Israeli sovereignty” over portions of the West Bank, Democratic Rep. Alexandria Ocasio-Cortez spearheaded a letter signed by a dozen Democratic lawmakers that called for the U.S. to condition its $3.8 billion in U.S. military funding to Israel on activities related to settlement building should Israel move ahead with annexation.

Biden however reportedly weighed in personally to ensure the DNC platform did not reference “occupation.” Although he does not support annexation he has said that he is against adding conditions to military aid to Israel—something the DNC document re-affirms in its expression of an “ironclad” commitment to its security. Jeopardizing that would be counterproductive, Novik says, limiting Israel’s ability to make the concessions required to move towards a two-state solution. Any suggestion of daylight between Israel and the U.S. on the issue would also weaken its regional deterrence and lead to fresh outbreaks of violence, Novik adds. The U.S. “has plenty of venues to express displeasure without undermining Israeli security.”

There are other reasons to doubt a Democratic White House will divert from the status quo. Despite stark differences in the Trump and Obama administrations’ approach to the Israeli-Palestinian conflict, neither advanced a solution that was palatable to both sides. Faced with an array of other domestic and foreign policy challenges, experts say, it’s unlikely resolving the decades-long conflict would be a top priority for either Oval Office.

Still, Biden has already pledged to restore U.S. aid to the Palestinians if elected. He has said he would leave the U.S. Embassy to Israel in Jerusalem—a move a majority of Israelis regarded as long overdue—but says he would reopen the U.S. consulate in East Jerusalem for the Palestinian leadership, as well as the PLO’s mission in Washington.

History suggests the next Palestinian envoy to the U.S. won’t feel confident about installing curtains, Zomlot says, but the Biden Administration’s proposed steps at least address the acute sense of loss he felt when the mission closed in 2018: the opportunity to engage with American progressives, Jewish-American organizations, and the public at large.

Progressive policies such as resolutions to support a two-state solution, to resume funding UNRWA immediately, and to uphold the human rights of child prisoners detained by Israel all came about as a result of “pressure from below,” Zomlot says, rather than from above. “The excitement we have is engaging that phenomena in America.”

Write to Joseph Hincks at joseph.hincks@time.com.

“We Owe It to Future Generations to Explain Why.” How Robert McNamara Came to Write His Memoirs About Vietnam