When Yiqi Liu and her mother, Qi Wu, became U.S. citizens last year, they took an oath to support and defend the U.S. Constitution. But, they say, they received little information about one of the biggest benefits that the Constitution would now allow them: the ability to vote. “When I became a citizen, the opportunity of registering to vote on the spot was not emphasized. It was simply mentioned in the few documents I received from the ceremony,” Liu, 22, explains.

But Liu, who emigrated to the U.S. with her family from China in 2013, knew that she wanted to cast her vote in the 2020 election—and, she decided, as have many Americans in the time of COVID-19, she’d do it by mail. She found the process of registering and receiving a ballot convoluted, but for Qi Wu, there was an additional barrier. Liu helped her mother, who isn’t fluent in English, request an absentee ballot; Nassau County, N.Y., where they live, is not required to provide Chinese-language access services during elections. “If there was an option to request a ballot in Chinese, it wasn’t obvious,” she says.

And once Liu’s own ballot arrived, another concern arose: her signature. She’d needed to create a new one after coming to the U.S, though she kept it in Chinese characters, and now her ability to vote could come down to whether that new way of writing her name matched across documents.

“If you don’t speak or read Chinese, it might be very difficult for you to recognize a signature in Chinese,” says Liu, who painstakingly cross-checked her ballot signature against other documents bearing it. “I’m worried. What if my vote isn’t valid because my signature looks different?”

More than 11 million Asian Americans are eligible to vote in the 2020 election, making up almost 5% of the electorate. Asian Americans are also the fastest-growing racial or ethnic group in the total pool of eligible U.S. voters, and the demographic is of increasing importance in swing states including Pennsylvania and Michigan. In an effort to reach this crucial part of the electorate, earlier this month Democrat Joe Biden’s presidential campaign announced a paid-media effort focused on Asian Americans and Pacific Islanders. Ads are being shared via television, digital, radio and print, nationally and in battleground states. “Stand Together,” a commercial at the center of the campaign, features images of a diverse range of Asian Americans and ends with text that says “AAPIs for Biden Harris.”

Heartwarming commercials might not be enough to lock in those votes. Asian Americans already favor Biden over President Donald Trump by nearly a two-to-one ratio, according to the 2020 Asian American Voter Survey, but—as Liu found—the process of voting still presents a number of challenges that are specific to the demographic. “Campaigns and outreach groups need to make sure that they are giving Asian Americans the nuts and bolts kind of information,” says Mindy Romero, director of the University of Southern California’s Center for Inclusive Democracy.

As more Americans are encouraged to vote by mail amid the pandemic, Asian American voters, especially those who are new to the U.S. or who face language barriers, may encounter extra difficulties with that method of casting a ballot. 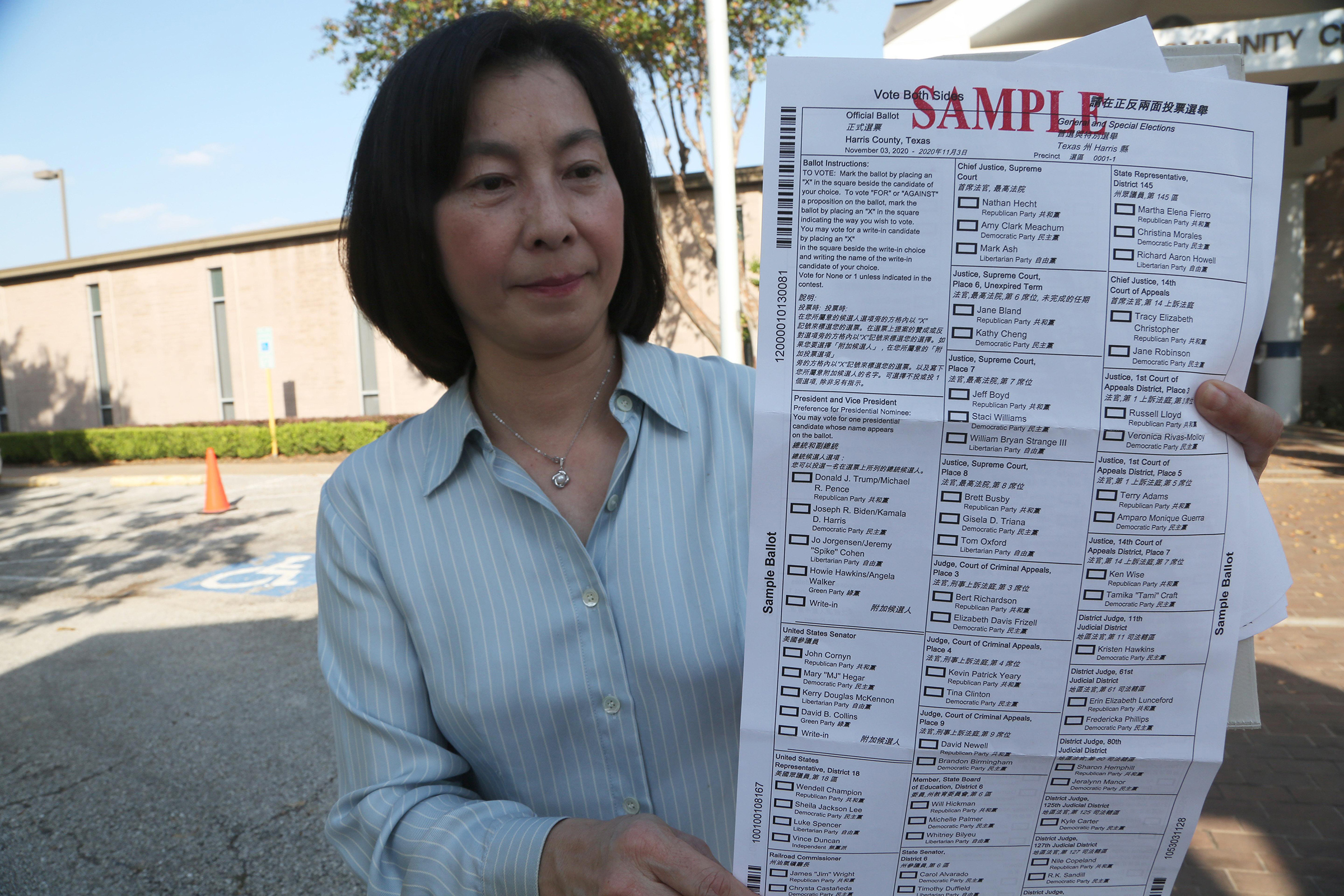 A woman presents a Chinese ballot sample for the 2020 presidential election at a polling station near Chinatown on Oct. 14 in Houston

Romero co-authored a study that examined voting behavior in California in the 2018 and 2020 primary elections. The report focused on how the Voter’s Choice Act, a measure that increases vote-by-mail and consolidates in-person voting options, influenced turnout differently across demographic groups. The law was found to boost overall turnout in both elections—but, looking at Asian Americans in particular, the researchers found a decline in vote-by-mail turnout in 2018. That difference may go back to the lack of contact from the campaigns.

The signature problem is also widespread. A study from Asian Americans Advancing Justice – California found that Asian Americans who vote by mail face a higher than average ballot rejection rate. The most common reason for rejection was a non-matching signature.

“Some immigrants don’t have a ‘signature’ until they come to the U.S., so perhaps it’s not as set as [it is for] those of us that grew up signing our name all the time,” says Deanna Kitamura, one of the authors of that report and former Voting Rights Project Director at Asian Americans Advancing Justice – Los Angeles. “My mom probably didn’t have a ‘signature’ until she came to the U.S. Using our alphabet was not second-nature to her. I grew up watching her sign her name carefully, as if it was still relatively new.”

The highly politicized conversation surrounding vote-by-mail turnout this year can be even more complicated for voters whose preferred languages are spoken by relatively fewer Americans. Tony Do, 23, who is Vietnamese American and is based in Houston, helped his parents obtain mail-in ballots. But once they had the ballots in hand, they struggled to get the information they needed to be confident about the process—especially given their worry over Trump’s false statements about the security of voting by mail. “[My dad] was concerned with Trump’s continued claims that there was fraud with the vote-by-mail system,” says Do. “He was confused about where to go to be able to check on this information, especially with Vietnamese being his native language.”

As the election nears, Kitamura says that campaigns would do well to remember that all voters differ in their needs. “We can’t assume that all voters are the same,” she says. “Asian American voters are not the only group with higher [ballot] rejection rates. With more and more voters using vote by mail ballots, we need to figure out how to ensure every vote counts.”