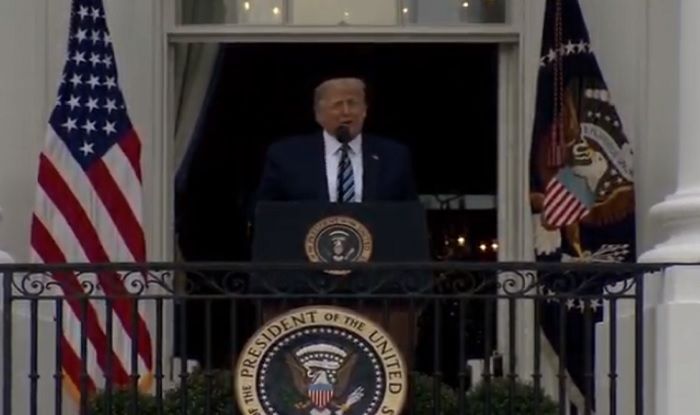 New Delhi: US President Donald Trump made his first public address after being discharged from Walter Reed Military hospital (where he was treated for COVID-19 infection) and told his supporters that through the power of American science and medicine they will eradicate the ‘China Virus’ once and for all. Trump, 74, and First Lady Melania, 50, tested positive for COVID-19 last week. The president was taken to the hospital for treatment. After spending four days there, he came back to the White House on Monday. Also Read – US Election 2020: ‘No Medical Reason For The Decision’, Says Trump Campaign After Organisers Cancel Oct 15 Presidential Debate

“I am feeling great. I want to thank all of you for your prayers”, the president assured, while addressing hundreds of Republican supporters from the balcony of the White House in a campaign-style event. Also Read – US Election 2020: President Trump Can Return to ‘Public Engagements’ From Saturday, Says White House Doctor

“Our opponents will crush the comeback (from COVID-19) with unscientific lockdowns. We have a level of support the likes of which nobody has ever seen,” Trump boasted, as he launched into a riff on ballot fraud.

Critical of Biden, the president said if the left gains power, they will launch a nationwide crusade against law enforcement taking away their funds, their firearms, and their fundamental authorities.

It is time for all Americans to stand up and reject the campaign of slander against our police from left-wing politicians and liberal pundits, he said.

The White House described the address as an official event where the president delivered remarks to peaceful protesters in support of law and order.